So much depends upon so much that we don’t know,
or can’t know, or won’t know, or shouldn’t know—all those
negative contractions squeezing denials of understanding
to their crises—that once we finally know it,
discovering what it all depended upon may be, well, fill in your own
blank, terrorizing being one fashionable
possibility of a myriad and duly acknowledged here.
Williams, of course, thought it came down to some damned red wheelbarrow
(rain and chickens included). What did he know? Fucker wouldn’t say.
Took the poetic fifth, he did—
there’s a lot of that going around and it just keeps going around.

Bombings, for example. You can only write about the ones you missed,
or that missed you. That wheelbarrow with a gob of C-4
planted underneath, the one that’s triggered just as you
turn away from the chickens after lifting the handles—
you ain’t going to have much to say about that one.
Spookier still is the one where the little boy or girl runs out of the house
and you’re watching and still smiling from the second story window
as the tiny hands lift the handles—
now what the fuck can you say about that that will make any sense?

From Rome I once wanted to head north to Bologna then east, thinking
of Austria and Alps, but the little lady didn’t want any of that
so we butted heads and banged on walls until the matter was decided,
and the train ride up the Italian coast (the Riviera!) wasn’t
so bad after all, all the bare titty on view being more than adequate
compensation. What I mean to say is that
her wheelbarrow was better than mine on that particular day,
mine undergoing violent particle transformation
courtesy of a package left by neo-fascists in the Bologna train station.
Eighty-six (according to the International Herald Tribune) at once
reached down to grab their life’s handles at 10.25 am, Aug. 2nd, 1980 while I,
having taken a ride in the wheelbarrow browning next to me
on the Riviera, ogled all the bare titty
glazed with sweat not even appreciating how much my sweet life
depended upon them.

Therefore, I maintain that genuinely Intelligent Design wouldn’t include
human beings, that beliefs are not causation
nor have they ever saved anything from the truth, and that includes
all the wheelbarrows that—okay, have it your way, the red definitely does
symbolize blood—cannot be avoided no matter what dogma
might be cherished while lifting the handles. Turkey vultures
have been kettling every evening over a vacant lot near the middle
of the town where I live. Everyone says omens. I say birds.
Of course I would like to go see what the fuss
is really about, but I haven’t. Let me go back to this instead: the two of us
got into a real knockdown (metaphorically) drag out
screamy weepy kissy fucky I’m sorry tooey fight that afternoon
and the whole time we thought it was about
direction of travel. And it still grates on me. After all,
she never once asked about our chickens, so white, always white,
and so close. I would have told her too: They go
cluck, cluck, cluck. They never stop, they go cluck, cluck, cluck
and don’t give a damn about anything
we might call god, or fate or other mortality-denying bullshit.
They just go cluck, cluck, cluck—
sort of like a Greek chorus, you see.

Michael Lee Phillips lives in Southern California. He previously worked as a journalist, photographer and teacher but now writes full time and hopes that the Liffey flows beneath him at least once a year. 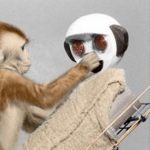 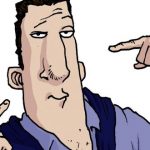