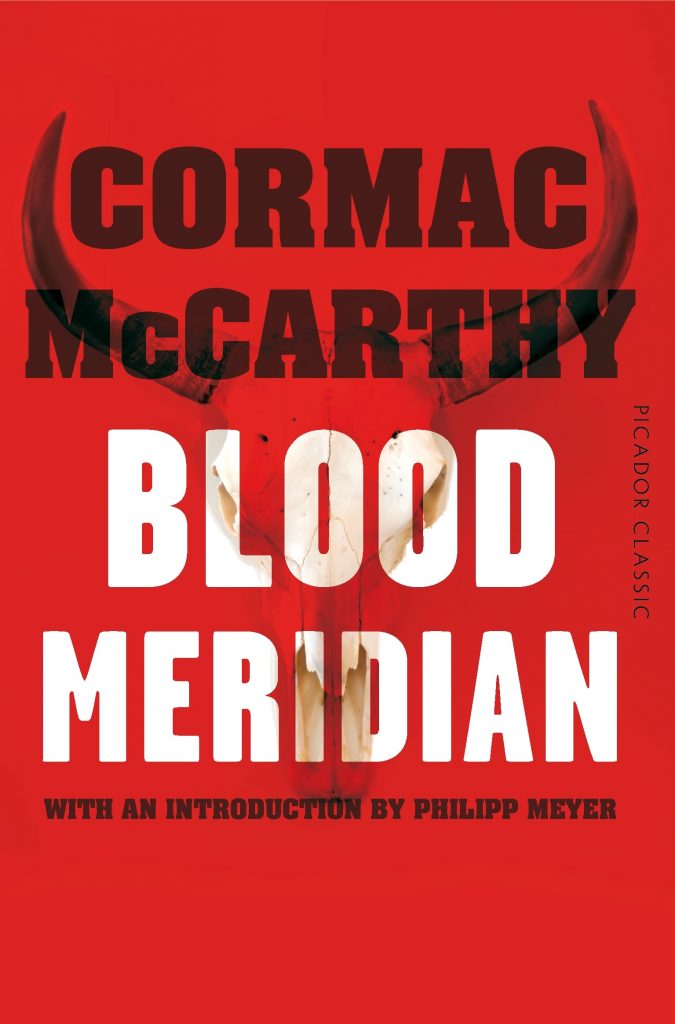 You have to be wary about returning. Sometimes there’s a right time for a book and it’s best not to double back. Reading`s fraught now. You pick up books and discard them. You`re looking for something and you`re not sure it’s there anymore. You don`t trust writers the way you used to.

At the centre of Cormac McCarthy`s 1985 novel, Blood Meridian: Or the Evening Redness in the West, is the history of a scalp-hunting expedition in the trackless borderlands between the United States and Mexico. Its participants are savage, pitiless and amoral and the land they hunt is indifferent to slaughter. They inhabit a dark mechanical universe, clanking and revolving, indifferent to meaning or purpose. It is a determinist view of history, and bleak enough. All the reader has to relieve the monstrous implication of this is the majestic impulse of McCarthy`s prose.

His protagonist is the unnamed kid, a fourteen-year-old runaway with a taste for mindless violence, his father a drunken schoolmaster who taught the kid nothing. His instructor and mentor becomes Judge Holden, vast, balding, learned and savage, repository of and spokesman for the mocking emptiness of the desert.

McCarthy could not be said to be part of the Western tradition in American film and literature. The world of Blood Meridian is unique and he has willed it into existence. The filmmaker`s West was a backdrop against which to act out human experience. McCarthy`s West is a void into which it empties.

This is the harshest of lands. A storm is a biblical set piece. The vegetation is barbarous, the creatures macabre and haunted. The works of man are temporary. Towns and villages crumble back into the earth. Women are almost absent, silent attendants to the fearsome self-mythologising of the menfolk, or recipients of mindless violence. The thesis is Darwinian. Those who cannot defend themselves suffer. But it is anthropology rather than misogyny and McCarthy is more at home with the terse affinities of men.

McCarthy is a private man. He was brought up in Knoxville, Tennessee and lives in El Paso, Texas. The place names provide a model for the language. El Paso (the gateway, the portal) the hallucinatory desert city set against the Calvinist rigours implicit in the name Knoxville. His characters travel on horseback. They understand the mechanics of a No. 4 1/2 Newhouse wolf trap. And they know how to use guns.

I went back to Blood Meridian ready to pick holes. Is the reader expected to buy into McCarthy`s savage vision? Does a writer’s version of the world begin and end within the covers of the book? What are you meant to carry away from it?

There is a necrotic splendour to the text. Bloody slaughter, scalp-taking. Captain White`s head pickled in a jar. It is ghastly and unrelenting and the brilliance of the writing sweeps you along, but when you`re getting into the shadow of the portal yourself and when a writer sets out to give you his measure of the universe and it turns out to be ordered in equal quantities of cold beauty and barbarism, then he better be able to carry it off. Nihilism was all very well twenty-five years ago, but McCarthy`s desert is no country for old men.

These aren`t idle matters for the writer either. In encompassing the amoral, does the work itself dispense with morality? If something is truly beautiful, can it be truly bad?

Second time around I don’t really buy the judge. The proselytiser of death, linguist, naturalist, tracker, bloody killer, bald and monstrous, the seat of judgement and mystagogue of death. He’s a gore-soaked vaudevillian and his credo is intellectually gaudy for all its fearsomeness. But perhaps you’re not really expected to buy the judge.

In the end it’s the writing that cleaves you to the work. What I thought would be a weakness was a strength. The tone cannot be allowed to waver and it doesn’t. You take your eye off the page and think you’ve detected self-parody, but when you look back, it’s all there. McCarthy invokes the name of God and uses it often, and without irony. There`s a bloody cartoonishness to the interactions between his people but when the language addresses itself to landscape, to the desert, then it is exalted. The salt pans, the dust playas, the little desert foxes and endlessly hungering wolves are the agents of an exacting deity.

It would be foolhardy to extract redemption from Blood Meridian, though love is present, if only of the harshest and most unrelenting kind. A kind of fidelity is present with the Apaches and the desert animists, the Delawares. If they are strange and arcane, it is because it is the only proper response to the country. Everyone else is just passing through.

Books lie, he said.
God don`t lie.
No, said the judge. He does not. And these are his words.
He held up a chunk of rock.
He speaks in stones and trees, the bones of things.

Announcing an all poetry issue for Summer 2022

Safe in a Box