‘The Poetics of Space’ by Gaston Bachelard 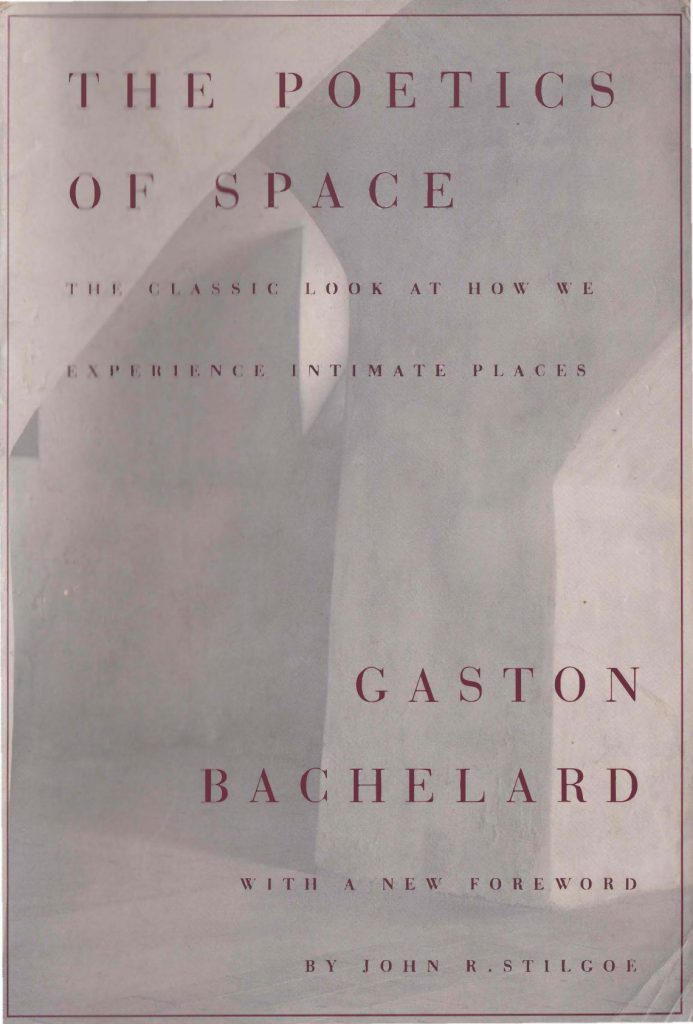 The first time I came across Gaston Bachelard was in Thomas McCarthy’s 1982 collection of poems, The Sorrow Garden. ‘Bachelard’s Images’ and ‘Professor Bachelard’ mined images from Bachelard’s pioneering works on the the imagination, on childhood, reverie, and the magical spaces of houses:

Weary with physics he took the awkward
road, the flooded pebble-lane to childhood
where archetypes broke the backs of graphs
and instruments couldn’t gauge one’s mood.

Not long after, I got my hands on The Poetics of Space, first published in 1958 in French. Bachelard started off his working life as a postman and became a professor of natural sciences before turning to philosophy. The Poetics of Space is one of those rare books that, once read, never entirely leaves you and keeps drawing you back into its world. It’s a hard book to describe because one of its joys is that it defies categorisation. Poetry, philosophy, psychoanalysis, observation and memory all rub shoulders: the book is really an investigation of the soul by means of a grand tour of the interior landscapes of the imagination, with chapters on drawers, chests and wardrobes; the significance of the hut; nests, shells, corners. It would be hard to think of another writer who so intensely examines the way in which inner spaces operate on the imagination. Childhood plays a large part in this since it is the child who is most aware and engaged with the spaces of home, and also because childhood, poetry, memory and solitude are all part of the same imaginative continuum. For a child the house is a dreamscape: ‘The house we were born in is more than an embodiment of home, it is also an embodiment of dreams. Each one of its nooks and corners was a resting place for daydreaming…’

The book itself is a kind of poem; its mix of dense materiality and spiritual generosity reminds me of Francis Ponge, the great poet of things and ‘thingness’. We think of Irish writing as preoccupied with place with its tradition of dinnseanchas and the lore of placenames in Irish, but Bachelard offers us the lore of the micro-place, the primal shelter. He describes himself as ‘a psychologist of houses’, and I think the book helped me understand my own obsession with interior places, and with buildings and gardens both real and imagined. Some of it has to do with getting back to the perceptual state of the child. Childhood, Bachelard reminds us ‘is certainly greater than reality… It is on the plane of the daydreams and not that of facts that childhood remains alive and poetically useful within us.’ He also saw the lure of the house as a search for stability: ‘A house constitutes a body of images that give mankind proofs or illusions of stability. We are constantly re-imagining its reality: to distinguish all these images would be to describe the soul of the house; it would mean developing a veritable psychology of the house.’

I came back to him recently, not least because I’ve found myself embarked on a long-ish work to do with the notion of being housed and unhoused in the world, and maybe for that reason I found myself engaging with the book with a new urgency and pillaging some of it for the poem. I was recently reading an account of the attempt to find Horace’s farmhouse in Lazio. Archaeologists had managed to burrow beneath the large palace that was once thought to be the poet’s and found a much smaller house, like that described by Horace. They’d even analysed seeds found in still-intact flower pots to find out more about his gardening techniques. This is where archaeology becomes a kind of magic, whisking us out of the present into the realm of the Lares, the guardian deities of Rome, into the secret space of the ancient poet.

I also think of the story told by Bachelard of the French poet Ducis, who wrote affectingly of his country home, his kitchen gardens, his wine-cellar and his wood. Anyone looking for these in the future will have a hard time, his friend laughed, the point being that none of it existed except in the poet’s imagination. He’d always wanted a house in the country so, at the age of seventy, he finally gave himself one, and liked it so much he kept adding to it. This was so effective that he received offers from readers to help him work his estate.

‘Housed everywhere but nowhere shut in,’ Bachelard comments, ‘this is the motto of the dreamer of dwellings. In the last house as well in the actual house, the day-dream of inhabiting is thwarted. A daydream of elsewhere should be left open therefore, at all times.’ We all do this to some extent. Bachelard recommends taking a train trip, but we don’t need much persuasion. It often seems, as the train pulls out the station and offers us the continuous spectacle of other lives, other possibilities, that the whole point of locomotion is to allow the passengers to dream. Maybe this is also why I like prowling around the city so much, not simply to see houses but to project myself into every inviting window and taste other lives. Maybe, in the end, we are never quite where we are: we’re born to vacillate between here and elsewhere. Bachelard again: ‘As soon as we become motionless, we are elsewhere; we are dreaming in a world that is immense. Indeed, immensity is the movement of motionless man. It is one of the dynamic aspects of quiet daydreaming.’

Peter Sirr has published ten poetry collections, of which the most recent are The Gravity Wave (2019), a Poetry Book Society recommendation and Sway (2016). The Rooms (2014) was shortlisted for the Irish Times Poetry Now Award and the Pigott Poetry Prize. The Thing Is (2009) was awarded the Michael Hartnett Prize in 2011.

The Team of Alienation