‘As if a poem could vindicate
the heart’s retreat from constancy.’
—Elizabeth Garrett

Like a child who’ll have to stop pretending sometime,
a kite that will have to come down,
my mind—caught in branches.
While, outside, our neighbour’s boy’s
a warlock—a traffic-cone’s
his hat—
cigarette to cigarette, tea mug to tea mug is my spell.
I dream of champagne and firing squads
looking for the answer to the one question:
‘Who do you most love?’

This ordinary evening, all’s clear under sunset—junky, real.
So here on a windowsill,
by a phone connection burst to the wires inside the voice,
lie our toy bells—skip-found—that play a scale
and have birds for hammers.
Give me the scale. Who can say what they want?
Here, the mind flown too high in my head
won’t come down,
doesn’t know how to speak,
from these rafters it went to, to imagine.

Yvonne Cullen works as a creative writing teacher. Her first poetry collection, Invitation to the Air, won the American Ireland Fund Award in 1997 and was published by Italics press in 1998. Yvonne’s poems appear in 2004’s New Irish Poets from Bloodaxe Books, among other anthologies. Showtown, her non-fiction account of a showpeoples’ caravan park in Dublin, and of the twentieth century world of Ireland’s travelling shows, will appear at the end of 2012.

All Made Through Imperfection

The Dream That Wakes You Up 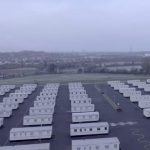