‘Even Greenland’, by Barry Hannah 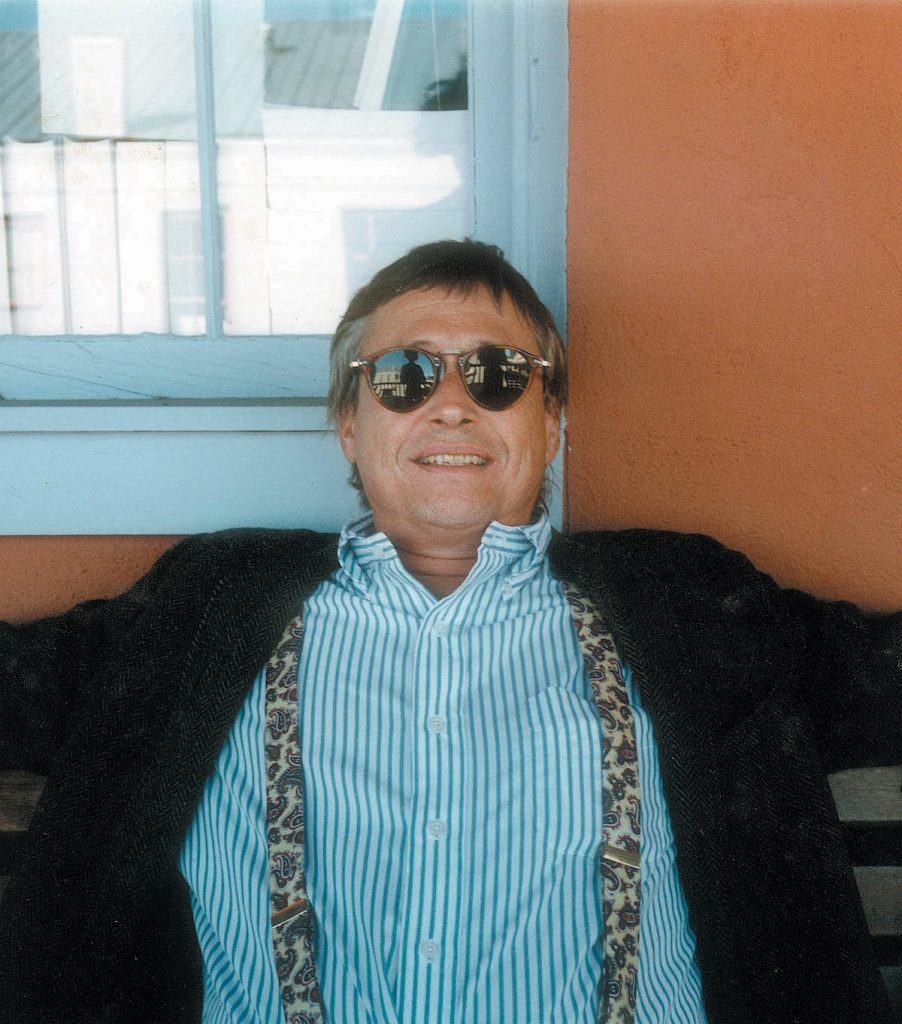 ’Even Greenland’ is an audaciously fleet Beckettian two-hander set mostly in the cockpit of a flaming fighter jet as it makes its final earthbound descent. It is also a story about writing and the Icarean impulse that fuels the creative act: that tormenting, romantic, paradoxical drive to create from the raw experiential materials of life something new and inimitable and entirely your own, a drive that, pursued to its final logical resolution, necessitates the transcendence—or annihilation—of life itself.

The story features in Barry Hannah’s third collection, Captain Maximus. It is 621 words long, and I’m going to end up quoting a thick streak of it in order to trace its effects, the haunting silliness of its conceit, its formal and technical nimbleness, the way it both exemplifies and yet remains a memorably atypical entry in Barry Hannah’s oeuvre.

First, an introduction. Barry Hannah was a Mississippian (born in Meridian, 1942, dead in Oxford, 2010) whose work—in the novel as well as the short story form—wryly and fruitfully contended with the heavy lineage of the great Southern masters while carving out its own place within that lineage. Sedition is the only worthwhile homage you can end up paying to your forbears, and so Hannah tainted his cadences—at their purest, as regionally honeyed and lapidary as anything out of Faulkner, Williams, Welty, McCullers or Flannery O’Connor— with the reflexive snap of postmodernism, the gutted intensities demanded by Gordon Lish’s aesthetics of essentialism, and the outré logorrheic rhythms of both the Beats and Henry Miller.

Hannah was always wary of the meretricious attractions of what he called the ‘canned dream of the South’ and ‘ready made Southernism’—both for the writer and the writer’s prospective audience. The long shadows of the tradition, the inherent marginality of the short story form as a commercial proposition, and the critical community’s tendency to allow geography to delimit and dictate evaluation (a ‘regional’ writer, whether praised or calumnied, will always be compared—to other regional writers, and to the assumptions and expectations of what that regional writing is) put brakes on his work’s popularity. Like The Velvet Underground, too few people bought Hannah’s work as it was being put out, but most everyone who did became a writer themselves. Hannah came to reluctantly accept this fate as a ‘Writer’s Writer’: ‘Categories are bad news. Being Southern will just kill you sometimes. It’s not always a graceful adjective.’

But it is what it is. What Hannah definitely was, was a prose and voice master. In a prostrate 2010 New York Times review of Hannah’s selected short stories Long, Last, Happy (Grove Press, 2010), Justin Taylor called him an ‘enchanter with a refined eye for the outrageous and an ecstatic worldliness worthy of Rabelais’.

First or third person, Hannah’s ferocious vernacular never wanted anything to do with the cultivated transparencies of the would-be objective. His style extemporized deliriously between high and low, between the slangy and the genteel, the loquacious and the cuttingly curt. It is rich and pungent, syntactically skewed and relentlessly showy, and discharges joy in concussive bouts; Gordon Lish, the editor most famous for working with Raymond Carver, oversaw Hannah’s earliest work, and helped Hannah decoct his prose to a roiling distillate.

Lest this become entirely an encomium, it’s worth acknowledging that the work can sometimes become juvenile in its insistence on shocking violence, and at times merely settles for redundantly parodying Southernism’s janky tropes. Women and African Americans remain mostly Othered, though to admit their lack of psychological roundedness in Hannah’s work would be to erroneously imply psychological roundedness in his central men: his characters could be in no way accused of suffering from a surfeit of introversion. They are outsiders, gamblers, smalltown thugs and rural Machiavellis, Confederate renegades, dissolute doctors, writers and musicians, brain-damaged prodigies, superannuated warriors who are nevertheless all doers and all talkers, inveighing against the ‘low middle’ of the modern world. They live consumingly, joyfully and rancorously out at their own limits.

As in ’Even Greenland’.

Consider the opening, as our unnamed narrator sketches, with the laconic fluency of the professionally inured, the situation of he and his pilot John:

I was sitting radar. Actually doing nothing.
We had been up to seventy-five thousand to give the afternoon some jazz. I guess we were still in Mexico, coming into Miramar eventually in the F-14. It doesn’t matter much after you’ve seen the curvature of the earth. For a while, nothing much matters at all. We’d had three sunsets already. I guess it’s what you’d call really living the day.
But then, ‘John,’ said I, ’this plane’s on fire.’

When things go wrong—instead of doing whatever it is characters might do in a straightforwardly lyric realist short story (shit their pants, mewl about the woman they both love, separately drift into a private epiphany featuring a childhood memory laden with symbolically charged imagery and dialogue) they begin to bicker; to quibble, and talk endings, like any writers might when faced with a sudden, peremptory deadline. For these pilots are writers, and with posterity moments away, the words that define their respective ends must be appositely significant, tuned with sufficient distinction to the moment.

‘You thought of any last minute things any?’ said I.
‘Yeah. I ran out a couple of things already. But they were cold, like. They didn’t catch the moment. Bad writing,’ said John.

John having acknowledged his failure to find good last words, the narrator switches tack, asking him if he had a good time in Peru, leading John to admit that he ‘hasn’t had a good time in a long time,’ that ‘there’s something between me and a good time… I’ve seen a lot, but you know I haven’t quite seen it. It
wasn’t fresh. There were eyes that had used it up some.’ ‘Even high in Mérida?’
the narrator asks.

‘Even,’ said John.
‘Even Greenland?’ said I.
John said, ‘Yes. Even Greenland. It’s fresh, but it’s not fresh. There are
footsteps in the snow.’

Footsteps in the snow; footsteps that set off envy in the artist’s heart, for as any writer must countenance the dread possibility that the book he wants to write has already been written, so too must he accept the fact that for an artist, no experience—even Greenland—can be entirely his. The territory has always already been traversed. The narrator, attempting to console John, proffers a domestic alternative to Greenland’s blemished scene.

‘Maybe,’ said I, ’you think about in Mississippi when it snows, when you’re a kid. And you’re the first up and there’s been nobody in the snow, no footsteps.’

And John becomes furious. Tantruming commences: pages begin to fly around the cockpit. John has been taken notes, amending, deleting, editing, as he goes.

‘What is it, John?’ said I.
John said, ‘you son of a bitch, that was mine—that snow in Mississippi. Now it’s all shot to shit.’

The writer’s problem, bound in a nutshell: whatever is authentic in life (or seems so) cannot be in art. There is no moment or experience of Platonic purity and exclusivity, and if there was or is, it wouldn’t be communicable: if it is communicable it can never remain just yours. To put a moment or experience into words—to capture it in language, to turn it into art—is to lose it, is to give it away. (John claims ownership of that snow, but of course it is just as legitimately the narrator’s.) For the writer/artist of an inflexibly romantic bent, obsessed with the authentic, this is intolerable. As the plane goes down John implores the narrator to eject, not out of any compassionate urge to save his friend, but so that he can have his death to himself:

The narrator ejects. The plane goes down.

A coda follows. The narrator and Celeste, John’s girlfriend, travel to the ‘black romantic worthless mountains five miles or so out of Miramar.’ Mutually dumbfounded, the narrator privately experiences something like the epiphany deferred and dismissed in the cockpit; despite the fact that the emergency crew ‘got all the metal away’, the narrator notes that ‘a burn on the blond sand’ remains. The narrator is sure he knows what it is, and names it: ‘I know I am looking at John’s damned triumph.’

Like those footsteps stippling the snow in Greenland, John has transmuted himself into something at once absent and present: a present absence, an absent presence. Within this story—and by the terms demanded by John himself—he has triumphed, his death an ineradicable statement scorched into the face of the earth, and yet an experience—as all our deaths must be—that remains definitively, ‘authentically’ his own.

If all this sounds heady, let me assure you the story is a quick, visceral thrill, gracefully negotiating its own conceit, wearing its metatextuality lightly and never forgetting, as Mr Hannah never did, that the outlandish music and raw joy a story can give, line by line, is what makes writing, and reading, worth a damn at all in the first place.