In the Wake of the Rising 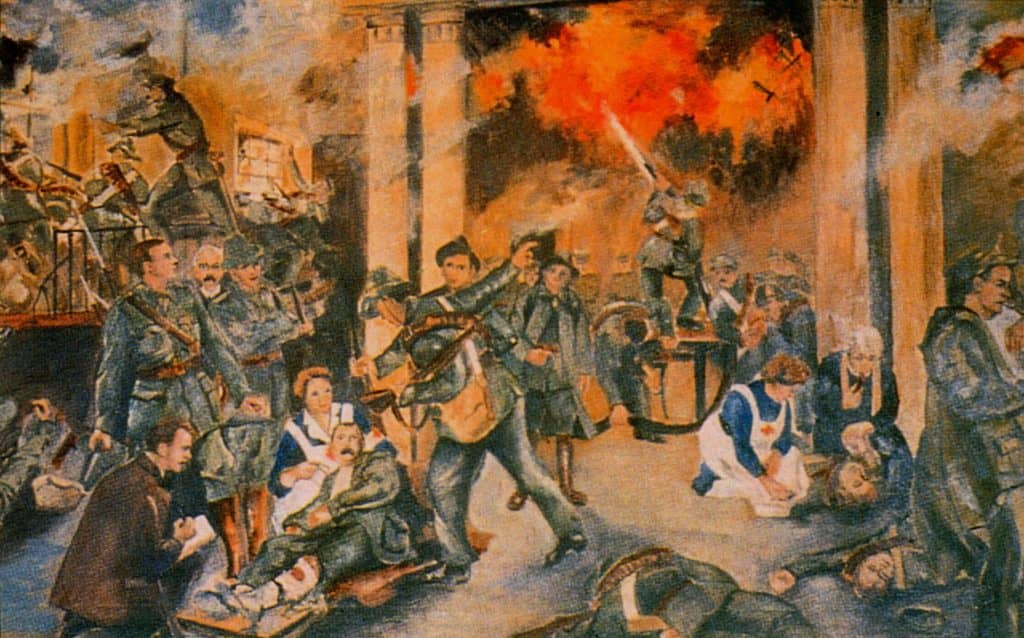 In April of 2005, I was asked to read something at the unveiling of a new plaque to Michael Joseph O’Rahilly—or ‘The O’Rahilly’—in what used to be Sackville Lane, now O’Rahilly Parade, just off Moore Street in the centre of Dublin. This is the lane where O’Rahilly was left to die after being hit by a number of bullets from an army barricade which blocked the top of Moore Street where it joins what is now Parnell Street. O’Rahilly was the first of the main leaders of the Easter Rising to be killed and the only one to die in action. There had already been a plaque to the man’s memory on the site, erected in 1937. With the redevelopment of the area into what is now the Moore Street Mall/Jury’s Inn complex, a long process of negotiation had been necessary to ensure a place for the plaque would be retained in the plans. This new plaque, designed by Shane Cullen, uses the text of the farewell note O’Rahilly wrote to his wife, Nancy, before he died. The note ends: ‘It was a good fight anyhow.’

The something I was asked to read was the Yeats poem, ‘Easter 1916’. To give voice to that poem in public brought about a kind of crisis of conscience in me, particularly as I reached the final refrain, ‘a terrible beauty is born’. In my Northern mind I was asking myself, where do you want to lay that concluding stress, on the word ‘terrible’, or on the word ‘beauty?’ What did I really think about the martyrdom of these men, ordinary men ‘transformed utterly’ by their deeds—was it all ‘needless’, were they bewildered by an ‘excess of love?’ Were they in the grip of a myth of blood-sacrifice that might awaken the primordial Mother Spirit, or was it an attempt to forge through violence an independent socialist republic? And for me the question also had to be faced of whether it was some new fusion of these two forces that helped to inspire the volunteers of The Provisional IRA in the North, men like Bobby Sands who had died on hunger strike?

In the last few months, as we approach the centenary of the Easter Rising, the debate has been heating up about how we should remember this foundational moment in the history of our state, and who will be in charge of the whole business, and who will foot the bill. The current government in its projected plans for the commemorations has revealed itself to be deeply uncomfortable with the legacy of the Rising, and many different types of people have begun to look for ways to express their disappointment and frustration. More recently, the focus has moved to the founding document itself, the Proclamation, and what it means to us today.

It’s interesting to keep in mind the circumstances around the printing of the Proclamation itself. Organised by James Connolly, the compositors set to work in secrecy at the back of the Co-Operative Stores on Eden Quay at 11am on that Easter Sunday morning. Before too long they realised they didn’t have enough typeset to complete the document and that their only option was to print it in two halves, which accounts for the uneven line spacing. Also, they were forced to further improvise by making a ‘C’ from an ‘O’ for REPUBLIC, an ‘E’ from an ‘F’ for THE, and to substitute a different type of ‘e’ when they ran out. It is a make-shift, mongrel document in tune with the different ideals held by the men involved, from Pearse’s romanticism to Connolly’s socialism and then someone like The O’Rahilly himself who may not even have been in favour of the Rising, and who turned up for mobilisation on Easter Sunday to utter his famous line, ‘Well, I’ve helped to wind the clock—I may as well hear it strike.’

Earlier this month, a new group calling itself Reclaim the Vision of 1916 entered the debate. This diverse group, made up of trade unionists, historians, musicians and various sorts of artist including Robert Ballagh and Brian Friel, is calling on all the people of Ireland to take back for themselves the right to commemorate The Rising from the politicians. The group has effectively updated the Proclamation, stressing the need for a new assertion of Irish democracy and a deeper and broader discussion of ideas about what our republic should be.

The Stinging Fly magazine has decided to heed this call and proposes to devote the spring issue of 2016 to the theme, In the Wake of the Rising. A certain amount of the work in the issue will be commissioned but we are here putting out an open invitation for submissions. Writers are asked to respond freely to the principles in the Proclamation, to the story of the Rising, its place in our cultural memory, and the current state of the country we see ourselves as part of. And the country we see ourselves as having some hand in.

As a literary magazine interested in the short story form, the 2016 edition will also be a space in which to explore the current state of the relationship between writing and social engagement. The bulk of the submissions arriving into The Stinging Fly postbox bears the mark of the poetic realist stories of Frank O’Connor. It should be remembered that O’Connor, like Joyce who wanted to ‘forge the uncreated conscience of his race,’ developed his ideas of the short story form out of his reading of realist writers like Turgenev, Chekhov and Maupassant. These were writers who believed the purpose of their work was to meticulously delineate the social conditions of their time and by so doing to contribute to changing those conditions. In his 1942 essay, ‘The Future of Irish Literature’, O’Connor outlined a doctrine which claimed Ireland needed a socially-engaged literature because ‘there is no public opinion, and if the artists do not fight, who will?’ The very form of the realist short story developed alongside a belief in its power to assist reflection and social reform. So what then is the function of that short story form today, bled of its social responsibility, when the very mention of political or social-engagement is like a veiled insult to most writers?

The tricky subject of the relationship between literature and politics was touched on in Sean O’Faolain’s first editorial for The Bell in 1940. The job of the magazine would be ‘encourage life to speak’, to question the consensus of the day and ‘to stir ourselves to a vivid awareness of what we are doing, what we are becoming, what we are’. This wonderful optimism should be compared to the pessimism of his last editorial, his signing off, in 1954, where he writes, he has ‘suddenly grown detached and impersonal’ and concedes that The Bell failed because ‘politics and social problems had intruded’ on its pages. Should our writers then retreat from the chaotic public world into some kind of private zone of aesthetic purity?

One last example of this troubled dialectic in Irish literature is from the first editorial of The Crane Bag in 1977. The editors state, explicitly, that they hope ‘the creativity of art and the commitment of politics might converge to challenge the assumption that the aesthetic and political are two mutually exclusive areas’. The editors go on to argue for a critical approach that:

suspends the paralysing immediacy of facts by examining their roots and their reason for being there in the first place. Such critical freedom is what Socrates called irony: a blend of comic detachment and committed concern. Could a crane bag be for Ireland what Socratic gad-fly was for Greece?

The Stinging Fly edition of Spring 2016 (to be published next February) will offer an opportunity to writers to re-evaluate and reclaim the vision of the 1916 Easter Rising and to engage with the state of the Republic today, the social conditions in which they actually do their writing, and to contribute to a debate on the colour of the horizon we should be aiming for. Even if history is irretrievably past, its meaning is still in the creative process of becoming.