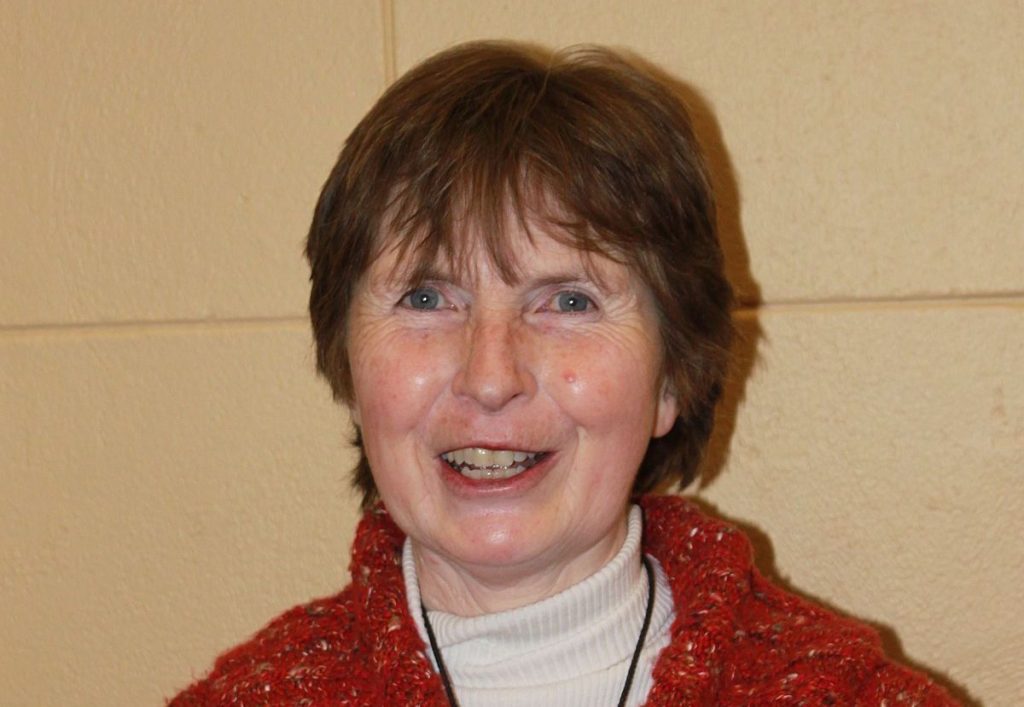 A wise fella long departed once cracked wise that only two things are of interest to the seriously minded among us: sex and the dead. It just so happens that those are two things the Irish language tradition, and particularly its current coterie of female poets, do very well indeed. Those of us who are left distinctly bored by the tentative, apprehensive version of female sexuality once inscribed in love poetry—all sighs and whispers—could do no better than delve into the muddy, bloody, but by no means frigid water of these banfhilí, particularly Nuala Ní Dhomhnaill and Biddy Jenkinson.

It isn’t that their poetry is without sentiment but that they, and particularly Jenkinson, manage to fuse that mushy stuff with edge and especially with humour. One might struggle to sum up Biddy’s work more succinctly than by promising that dick jokes are never off the table.

And so we have Jenkinson’s book-length poem Mis, her retelling of a bawdy medieval romance full of the big four: madness, violence, sex and humour. A tortured soul of the first class, Mis lives out her chronic Post Traumatic Stress on the eponymous Sliabh Mis and survives by plunder and cannibalism. Like an edgier Mad Sweeney, she too has grown feathers and taken to living alone outdoors after the trauma of the battlefield (though in Mis’s case it was discovering her father’s corpse in a soup of entrails, and then reverentially drinking his blood, that really did for her).

So Mis had the gentlefolk running scared until one day—you guessed it—a brave young man decides to take her on. Not a soldier, mind, but one of our own kind: a harpist by the name of Dubh Rois. Off he goes armed only with a few coins, a hunk of bread, his harp and… well, I won’t spoil it for you. Over thirty-five truly manic pages of highs and lows, Mis is transformed from loathly lady-gealt:

[Rats live in the black fuzz / under her oxters / a worm in her belly button./ Her eyes have no lids… / she covers them / with the foreskins of her enemies]

to great beauty of sound mind and impeccable manners. As the above sample hints (foreskins as eyelids, anyone?) it is, at times, an intense and grisly read, and definitely not beach-appropriate. But even the gore is carefully curated and the pace fast enough that it doesn’t descend into snuff. Behind the alluring wilderness there is remarkable depth to the story which deals primarily in trauma, madness and the cycle of violence.

Like a lot of the most interesting villains, as well as being vicious Mis is herself an extremely vulnerable character. Happily, Dubh Rois is there to guide her through necessary but painful recovery steps like retrieving repressed memories, dealing with separation anxiety, and consenting to a ritual bathing which strips her of her feathers and, it is suggested, her otherworldliness.

Amazingly enough for something so psychologically sophisticated, these steps come pretty much verbatim from the five-page original story on which Jenkinson’s (and Austin Clarke’s) retellings are based. Not once does it read like a self-aware exposition of trauma recovery in verse form; above all things, Jenkinson is a master of showing not telling. She can’t resist giving the nod to penis envy and the Electra complex in the remarkable scene where Dubh Rois lures Mis towards him by exposing himself, but momentum and entertainment are never sacrificed for these occasional flashes of cleverness, and they are always tempered by simple bawdy humour:

Jenkinson’s work has long bordered on the amoral, and by adopting such a deranged character she has free pass in Mis to revel in violence and carnage.

Interestingly, though, she quickly bores of ultraviolence and moves on to the more important business of sex and recovery. Mis’s transformation in the middle of the poem is described in terms reminiscent of Song of Songs with its lavish, lyrical romance:

Though some might object to Mis’s stability being wholly dependent on the men in her life—first her father, then her husband— Dubh Rois is far from the typical knight in shining armour. Indeed, readers might be forgiven for developing a notion for this intelligent, creative, cunning man so good in bed he can restore the most damaged woman to her senses…

To the truly jaded among us this might all sound too much like a fairy tale. We would do well to remember that fairy tales are dark and twisted things. Alas, happily ever after was not to be for Mis, as Dubh Rois is slayed collecting taxes once her rehabilitation into Kerry high society is complete. In deviation from the original story, Jenkinson uses this as an opportunity to return Mis to the wilderness and in the process she writes some of the most moving elegiac verses to be found in modern Irish poetry.

Mis finishes on a high point with ‘Amhrán Mhis ag Grianstad an Gheimhridh’, one of Jenkinson’s finest poems to date. Our heroine, returned to her bird form and living in the wilderness, sings a song of the coming spring in the black heart of winter. This is Jenkinson’s most anthologised piece for good reason: a microcosm of the entire collection, it is the perfect winter poem, promising that más fada an oíche, tig an lá, that morning follows the dark night of the soul.

Happily, it is also one of a small number of Biddy’s poems to have been translated into English, so I feel at liberty to quote extensively from it here:

[In the deep of every winter since,
in the dark entrails of the year,
in return for this grace and favour
I set the sun up in my heart,
I lance it high into the bowl of air and light
on a bolt of music,
that the birds may follow it into the mouth of spring]
(—trans. Theo Dorgan)

Jenkinson’s poetry has always been learned, with a strong intertextual bent. The scope of her knowledge can make her work feel inaccessible at times to the casual reader: references to botany and evolution trip off her tongue, and she describes her travels to Sarajevo and Helsinki, Ottawa and Alabama as disinterestedly as if she were talking about a trip to the corner shop. Her poems are also frequently in dialogue with the Gaelic tradition, culminating in her latest collection Táinrith, a female-centered, multi-layered and explicitly corrective retelling of the Táin Bó Cúailnge.

Though genuinely not an ivory tower poet, her subject matter might at times be offputtingly niche. At the very least, her cleverness needs to be tempered by something simple and forceful. In Mis, Biddy manages to quickly set the scene without holding court, and the obscurity of the reference is more than counterbalanced by the story’s immediate emotional impact. Full blooded, compelling and even strangely alluring, Jenkinson’s Mis is so much more than a manuscript curiosity.

Published in 2001 to virtually no fanfare, to my mind Mis remains the most exciting collection published this side of the millennium.

Caitlín Nic Íomhair is an aspiring poet and academic from Co. Down. She spends her days speaking too fast and reading more poetry than she writes in Trinity College, Dublin.

Stations of a burnt out landscape

The Meaning of the Rabbit