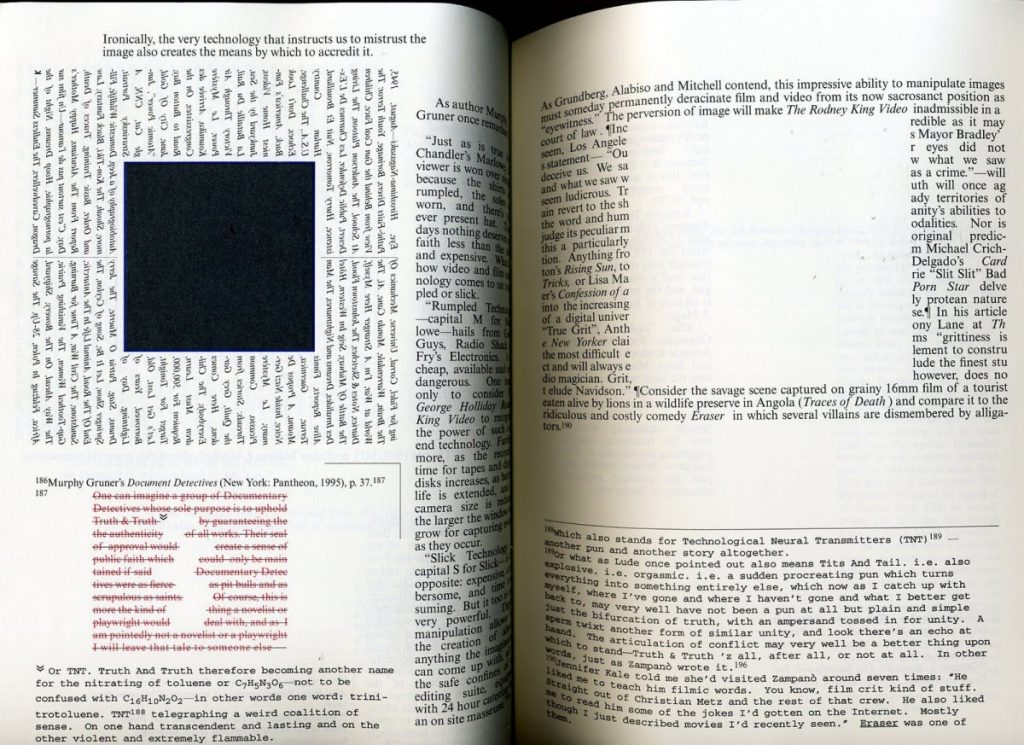 I remember my first look inside House of Leaves, in Waterstones, back in 2000. Some crazed designer, or vandal, seemed to have rearranged the interior of The Novel. Dense text in a variety of fonts, floods of footnotes, words spiralling, words turning upside down, words thinning to one or two per page, pages with diagrams, pages with squares of foreign text inserted into narrative, an index.

Ambitious fiction appeals to me, but I also enjoy a story. Not very hopeful of finding one, but still under the spell of the intriguing cover, a sepia-toned image of a door opening into darkness, I flipped through a few pages and started to read and minutes later found myself at the till buying the tome that occupies one of the Crucial Shelves at my back as I write.

In the passage I happened upon, Will and Karen Navidson and their children are moving into an old house on Ash Tree Lane in rural Virginia. Will, a photojournalist, is supposedly intent on saving their marriage. Obsessed by his often dangerous work in distant troubled spots, he has neglected Karen, and fearful of losing her, all he wants now—he says—is ‘a cosy little outpost for me and my family. A place to drink lemonade on the porch and watch the sun set.’ Predictably, given the genre, the house has other ideas, though they’re not remotely the sort you’d expect.

Will, it turns out, hasn’t really kicked his compulsive work habit. He has brought his work home. Funded by grants, he is filming the family’s experience of moving into the house, and his camera captures the first, quiet intrusion of strangeness into their new lives. In a wall of the living room is a door. He and Karen haven’t noticed it until now and are giddy at the discovery. Then Will opens it. Inside is a hallway ten feet long, cold and dark. Yet when he goes into the garden to film the wall’s exterior, there is no sign of any hallway, ‘no ten foot protuberance, just rose-bushes, a muddy dart gun, and the translucent summer air.’

Other doorways into paradoxical space appear. Will discovers that the house is a quarter inch bigger inside than outside, and that the hallways behind the multiplying doors are growing, spectacularly. Weighed down with provisions, he and some companions make days-long expeditions through labyrinthine corridors. An enormous staircase takes many hours to descend. From somewhere out in the dark, cold, shape-shifting network of passages, comes an ominous growling.

On re-reading, these passages proved as heart-stopping as they had back in the millennium when I disappeared for a week into House of Leaves. I wondered what it was that made them so scary.

Like any great horror story, this one takes us right up to the Inhuman and seems to abandon us there, powerless and uncomprehending as a small child. Danielewski has that gift. He bypasses our critical faculties and goes straight to work on our spines. This doesn’t seem to me a result of craft. The prose is strong, and he understands his world’s logic and illogic: he has lived there imaginatively. But as we all know from reading inert horror, sometimes even the best writers do not have that primal power; they can’t make us start, or see threat in a familiar door.

And then, the newness of Danielewski’s tunnel-scapes really makes us attend. We have encountered Contingent Worlds in other books, but this is different; it’s not Narnia for grown-ups. The laws, if there are any, are difficult to grasp. Does this world have malign intent? Or is it indifferent: are the torments that Will and his companions suffer simple bad luck? Because we are unsure, because we are constantly forced to process events, while also keeping half-an-eye on what might come at us next, we are really in the story, as open to its wonders and horrors as the early readers of Frankenstein or Strange Case of Dr Jekyll and Mr Hyde must have been.

It also struck me as important that this was not a weird new world far, far away. The labyrinth is in or of the Navidsons’ home. While Will ventures through the tunnels, encountering deprivations, violence and terror, the rest of the Navidsons continue, for a time, to live in the sunlit house on Ash Tree Lane. The children are distressed. Karen is seriously disaffected. So the book feels as rooted in realism as Austen or McGahern.

Yet, for me, none of that really explained what made the extraordinary occurrences on Ash Tree Lane feel more real than much of the so-called realism I have read in the last decade and a half. I began to wonder if the answer lay with tattooist Johnny Truant.

Much of the novel is about Truant. I’d forgotten how much. Truant hadn’t made that great an impression on me. Of course, any narrative running parallel to the Ash Tree Lane one is bound to be eclipsed by it. Maybe that’s an unfortunate truth about story-telling. In a multi-stranded tale, there is a risk that one strand will burn more brightly in the memory.

Truant had a very difficult childhood and is now a very troubled young man. He drinks and drugs a lot and sleeps with a lot of women. But it is only when he starts reading about the house on Ash Tree Lane that he begins to come apart. He can’t sleep, concentrate, control his thoughts. He loses his job, doesn’t leave his flat for days, neglects his appearance. If the story of the house shakes us, it’s destroying Truant. But then he is not only reading it, like each of us, alone: in the universe of this novel, he is the sole person reading it. Johnny hasn’t come across the Navidsons and their portal-afflicted home in a book on a table in Waterstones. He found it inside an old trunk belonging to the late, blind Mr Zampano, who wrote the story on countless scraps of paper (‘old napkins, the tattered edges of an envelope, once even… the back of a postage stamp’). Fascinated, haunted, Johnny has collated the writings, annotated them, and written about the terrible effect they’ve had on him, then passed his and Zampano’s words along to unnamed editors who have added further notes and commentary.

In stories, being the possessor of esoteric knowledge can be an insupportable burden. Faust. Macbeth. The antihero isolated by his secret truth. That’s one of the reasons Johnny disintegrates, but not the main one. With sardonic authority and convincing detail, Zampano relates the story of the Navidsons as if their ordeal, and the film depicting it, The Navidson Record, not only exist but are a focus of cultural controversy. He cites academic publications that squabble over whether the The Navidson Record is a brilliantly realised fake documentary, or true to facts. He writes essays on the roles played in the story by echoes, architecture, the unheimlich, and labyrinths. He quotes articles that explore the psychology of Will and Karen, appraise Will’s cinematic genius, and upbraid Karen for having an affair. The footnotes, citations and allusions are as vast and, yes, labyrinthine, as the corridors explored by Will, yet Johnny Truant can find in ‘his’ world no trace of this exhaustively analysed film: The Navidson Record and all the babble about it do not seem to exist. Could Zampano really have invented this complex and vivid story, and supplied the vast commentary on it? Why would he? Or is Johnny Truant going mad? Is the book making him mad? Has it, even, picked on this vulnerable young man?

Though at times he speaks from the pages of House of Leaves at such a high pitch of feeling that I wanted him to back off, I couldn’t help rooting for Johnny. He’s one of us, a reader. His response to the horror is ours intensified. But he also— to use a word that tolls throughout the book—echoes us in a more unsettling way. Reading about how Zampano’s apparently invented narrative somehow passes into Johnny’s world, traumatising him, I had the creepy sensation House Of Leaves was doing something analogous to me. Johnny is crucial to that effect. On its own, the Ash Tree Lane story is merely a fantastic yarn: when it dawns on us that it, and Johnny, are caught at the centre of a vast postmodern web of opinion, rumour, theory, critiques, commentary, crazily detailed citations, notes, diagrams and ephemera, suddenly Johnny and Ash Tree Lane are our world. Wordsworth and Heidegger rub up against quotes from a morning TV show. Truant’s drug-fuelled theories collide with the sober intrusions of the unnamed editors. Sense bumps into nonsense, trivia into madness, pithiness into exhaustive lists. Sometimes following the thread of the main story in this blare of distractions becomes as maddeningly difficult as trying to read in a public place full of flashing screens and people shouting into phones. But that’s how the novel captures like no other I can think of our contemporary information overload. Ash Tree Lane belongs to us, now, in a way that old castles, creepy moorlands and Mordor no longer do. We are living inside the book.

Is this what Danielewski’s novel is about then: data-deluge? At times I thought so, but like the shape-shifting tunnels on Ash Tree Lane, House of Leaves keeps updating under the reader’s gaze. Again and again, I had to revise my understanding of what the book was up to. It’s about marriage. No, a macho male’s need to prove himself. No, it shows how a family, in the absence of threat, will create its own danger. Sorry—it’s about America: the haunting of the Ash Tree area precedes the first settlers, after all. No, it’s a satire on the crazed attention we focus on celebrated people, places and events. No, no, clearly it’s a prescient evocation of the consequences of the Net: we can close the doors, put on the alarm, but there are still portals; things enter, we exit, lose ourselves… As I came to its last pages, I began to realise that I still hadn’t quite ‘got’ House of Leaves and that, like the other great works of fiction on my Crucial Shelves, it would eventually lure me back for another exploration of its haunting maze of resonances.

Philip St John's latest play The Restoration Of Hope will run next November at Mermaid, Bray and The New Theatre, Dublin. His stories have appeared in New Irish Writing and elsewhere. He has twice received Arts Council literature bursaries.

The Spider and the Angel