Autonomy: An Interview With Kathy D’Arcy 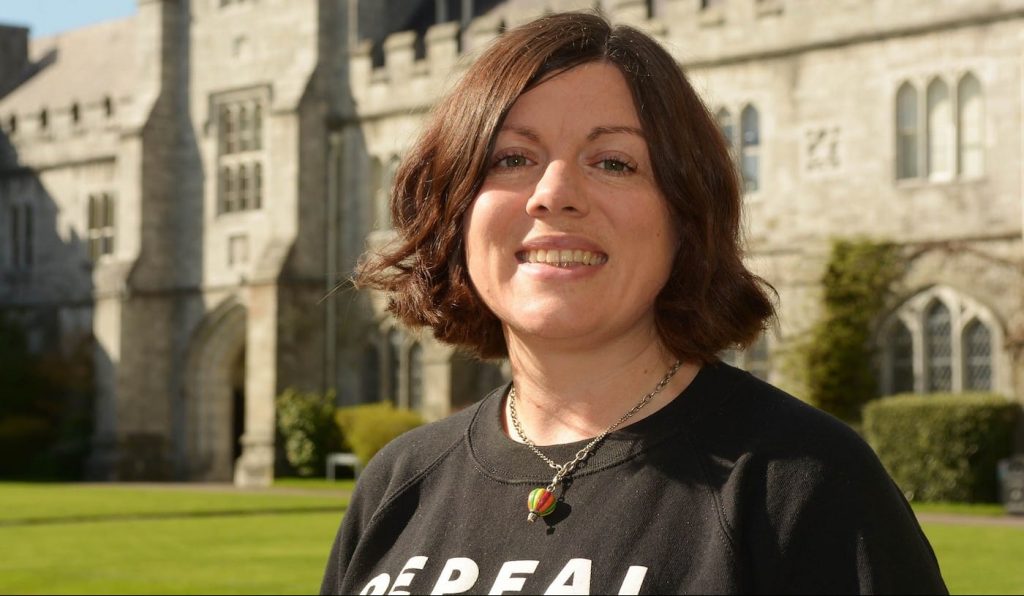 Kathy D’Arcy is a poet, workshop facilitator and and youth worker based in Cork city. Originally trained as a doctor, she is currently completing a Creative Writing PhD in UCC, where she teaches with the Women’s Studies and Creative Writing departments.

Proceeds from the sale of the anthology will go to support those working to ensure that all women have access to the full range of reproductive healthcare, including safe, legal abortion. Autonomy can be found in bookshops, or ordered online from New Binary Press.

The Stinging Fly: Can you tell me a little about the origins of Autonomy? What did you set out to do?

Kathy D’Arcy: As a creative writing teacher and community worker, I’ve long been aware of the power of story and creativity to help people to shift their perspectives when even hard facts don’t seem to reach them. I wanted to create a collection of creative writing on the subject of bodily autonomy to address this complex, nuanced topic in a way that would allow readers to really feel what it’s like to have your ability to decide for your body taken away or threatened. It can be easy to dismiss things we haven’t really thought about or are too uncomfortable to investigate like ‘autonomy,’ but it’s hard not to be affected by heartfelt stories and poems written by real women and men about their own bodies.

How did you go about selecting and asking the people you wanted to be involved? Did you have certain criteria, or was it more a question of looking for strong voices? Did you look for anything particular from them, or did they have a lot of freedom in choosing what to write?

I put an open call for proposals out through New Binary Press, the wonderful small Cork press without which this project couldn’t have existed. I wanted to cast as wide a net as possible. I’m very concerned always with inclusion and making sure that more than one kind of voice is represented, so I was particularly happy to have pieces from writers who had maybe never been published or even written creatively before, from members of the Traveller and Migrant communities, from people living with disability, members of the LGBT+ community, members of SWAI and so many others. This isn’t a book full of established writers: it’s a book full of people. I didn’t sanitise these writers’ struggles with the issue of needing abortion care, all the complexity is there. As is the fact, which comes through so clearly when you immerse yourself in the different pieces, that whether to stay pregnant or not has to always be the decision of the pregnant person. Forcing women to stay pregnant against their will is not the way to a kinder or safer society.

Do you think that working with an independent press like New Binary allowed you a freedom you wouldn’t have had with other publishers? How big a role did they play in terms of getting this collection out there?

Without New Binary agreeing to publish this book it could not have existed. When I approached major book chains about launches they refused, because the management had decided not to take a stance either way, so I can’t imagine that a major publisher would have been able to overcome those fears either. It’s small presses like New Binary who are pushing the envelope of literary evolution and facilitating less established writers to challenge the status quo – something that’s so essential to a living literature.

When you were first reading the pieces as they came in, were there any particularly impactful or meaningful moments? Anything that you read that really stopped you in your tracks?

Really this happened with every submission. It has been incredibly moving to share in these stories and to be trusted with them. Often writers shared stories and secrets with me alongside their submissions, and the process felt like a kind of sisterhood, a safe space where we could speak out together. I was so delighted and grateful to receive a poem from Nuala Ní Dhomhnaill – and such a poem! The simple, powerful stories of young women taking the decision to travel for necessary abortion care and feeling relieved afterwards are pivotal to the collection: we’re lied to all the time about the negative effects of abortion, but research shows over and over again that the vast majority of women who are able to access this care when they need it feel relief. I was also so happy to be able to include Traveller Women’s Rights Activist Eileen Flynn’s speech from the 2017 March for Choice in the book. She quoted a saying from her mother: ‘No-one knows the shoe is cutting her except the woman wearing it,’ and for me this said a lot about why people need to think hard about voting yes.

How do you think an anthology like this (and a political moment like this) connects with collections of women’s writing in the past, politically-motivated or not? Do you see this book as being part of a tradition of socially-aware writing by women in Ireland?

As you probably know I’m part of the Fired! movement, which seeks to challenge gender imbalance in Irish poetry (sign our pledge at awomanpoetspledge.com). I’ve been a scholar of Irish women’s poetry for many years, and the forgotten voices of Irish women are the subjects of the Creative Writing PhD I’m doing at the moment. Everyone knows about the patriotic poetry written by poets like Jane Wilde in the late nineteenth century and beyond, but my research showed me that many of the forgotten women poets of the ‘30s, ‘40s and ‘50s were writing quite subversive poetry which was completely overlooked and misinterpreted. They questioned, using experimental techniques, problematic elements of Irish life then being locked into our constitution by de Valera like the place of women in the home, heterosexuality and the sacredness of the family over the individual, and women’s roles as mothers primarily, rather than active members of the community. History shows that movements towards peace and inclusivity have generally been women-led here and elsewhere, and so I do think that this book is part of that. The last year has seen all kinds of women speaking up against oppression; it’s been a good year, and I’m excited to see this continue.

How important was it for you to include women from different, more marginalised groups in society? I feel like these are voices we don’t often seem to hear in these debates, or sometimes at all.

This debate going on in public spaces in the lead-up to the referendum often suggests that this is an issue for just one kind of person, and that’s not the case at all. At street stalls and actions, people of all ages, backgrounds and walks of life come to offer support and encouragement. The 8th amendment disproportionately affects migrants (especially those in direct provision who can’t travel), those enduring socioeconomic disadvantage, people with disabilities, people living with intimate partner violence, and many others. It’s so hypocritical to turn a blind eye as we all have been doing and to say ‘well can’t they travel?’ Women need to get the healthcare that is their right here in the country where they live, and not be exported like some shameful secret we’re not evolved enough to face up to. If people are okay with the right to travel, then like it or not they’re okay with abortion – they just don’t want it happening here, and that’s cruel and ridiculous.

Some of the voices in this collection have never been heard in literary circles before, if in any public sphere. It’s important to me that they are able to speak out here, and be heard.

How do you think artists and writers have impacted on the campaign to Repeal the Eighth, in terms of pushing for the referendum in the first place, but also in setting the terms of the conversation? Do you think they have a role to play in making very complex issues more accessible, or clearer for people?

I believe so strongly in creative activism: as I said, creativity has the power to engage people and to help them to think things through where facts, angry words, and protests sometimes fail. The Artists’ Campaign to Repeal the 8th Amendment has engaged so many people over the past year or more and has been behind the creation of so many effective, moving projects. When established artists come forward in favour of repeal and compassion, it changes minds too. It helps us all to feel supported in this journey.

There are quite a few different forms of writing in the book. Do you feel each form had its own strengths? What do you think fiction or poetry can do in this context that, say, a personal essay or a protest speech cannot?

I think there is power in diversity, and that the many different genres and styles in the book works to create a very complex and nuanced picture of what autonomy really means. Different styles and genres appeal to different readers. When people are very uncomfortable with an issue as so many undecided voters currently are, it can be a gentle way in to begin with fiction and poetry and to move then to real accounts.

Times like these can be so hard for people, I feel – moments when the most intimately personal experiences become the subject of national debate. What would you say to people who are nervous, who aren’t quite sure how to help, or who might find the political situation upsetting?

I suppose that’s exactly why I do creative activism – not everyone can endure angry protests, debates, and the avalanche of factual information, and that’s something to accept. I guess some people don’t realise what it feels like to have your intimate body and what you’re allowed to do for it be the subject of Dáil debates, unethical posters and callous statements. It feels like an attack. We need to mind each other through this. It is NO-ONE’s right to demand your story from you, and nobody should feel pressured to share their personal experiences, though projects like In Her Shoes have done a very good job of sharing stories and keeping people safe. There are so many ways to help: share social media posts, write letters to papers, wear badges… If there’s a skill you have that might help volunteers to feel better, like a creative talent or a self-care skill, offer it to volunteer groups to keep them going. Just little statements of support mean so much. And above all, what people can do is simply have the conversation with those around you – not in a difficult, debate-y way, just gently creating a safe space where people can think through the parts of this that are hard to process and come to a more compassionate place. We’ll win this with those gentle conversations.

Finally, how are you feeling about the referendum yourself? Are you excited, confident, anxious?

I’m hopeful for the future, and grateful for the work that has been done to date by so many amazing people. But I will not be complacent, and I will fight every day until May 25th to make sure that we can move forward and protect Ireland’s women and pregnant people. We none of us can be complacent about this vital moment: every vote counts.

Autonomy, edited by Kathy D’Arcy, is available to buy from New Binary Press.