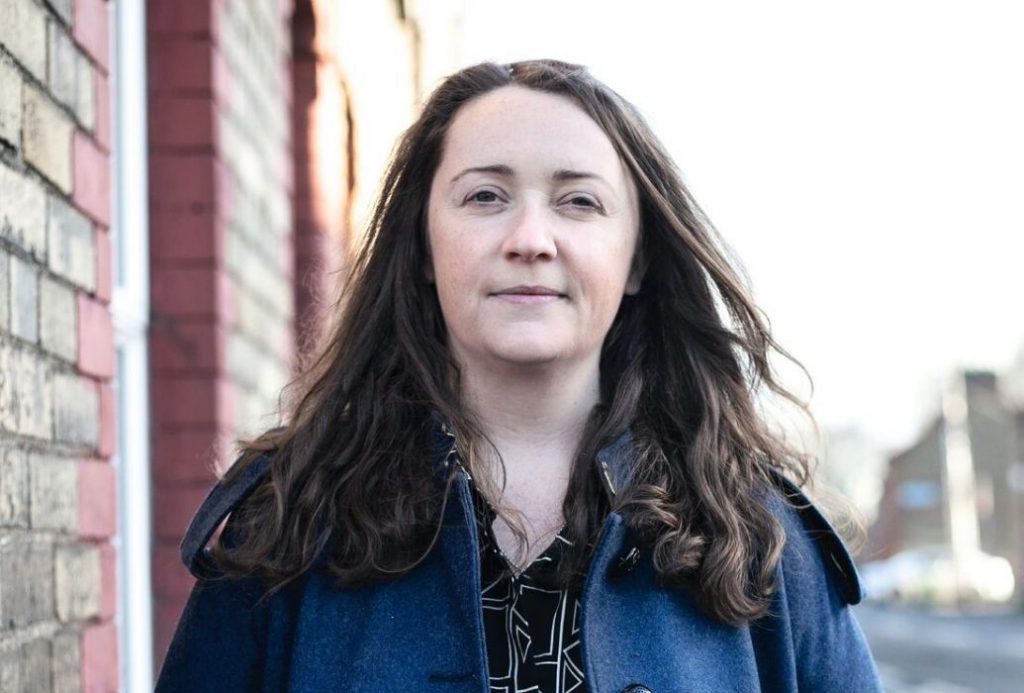 Una Mullally is a journalist, broadcaster, and editor of Repeal the 8th, an anthology of literature, personal stories, opinions, photography, art and design produced by the movement that catalysed 2018’s momentous referendum.

Mulally, alongside several of the contributors, will discuss the work collected in Repeal The 8th at a special event in Dublin’s Smock Alley Theatre on Monday, May 21st.

The Stinging Fly: Can you tell me a little about the origins of the anthology? What did you set out to do?

Una Mullally: The publisher Unbound was interested in working on a book about the Repeal movement, and the author Louise O’Neill put me in touch with the commissioner and editor there, Phil Connor, who is originally from Ireland. Myself and Phil had a chat, and quickly realised we were on the same page. I felt there were existing platforms collating personal stories very well, and that a good deal of polemic was also emerging, so I wanted to stay away from duplicating that. Instead, I had a more free-flowing idea of what an anthology on this subject could potentially look like; something that incorporated ideas of autonomy and the position of women in Irish society in a broad sense, as well as pieces that responded to the Repeal movement more directly, and gathered the visual art and design that was emerging from the movement. I wanted multiple forms of writing and imagery, something that was almost open-ended and abstract in its approach. To be honest, I stayed away from any particular point of reference or template and thought about how I could gather various strands across forms and perspectives to create something unique.

How did you go about selecting and asking the people you wanted to be involved? Did you have certain criteria, or was it more a question of looking for strong voices? Did you look for anything particular from them, or did they have a lot of freedom in choosing what to write?

I often think structure reveals itself, you don’t have to lay it down from the outset. Sure enough, even though many of these pieces felt disparate – poetry mixed with street art mixed with screenwriting mixed with essays and nail art and short stories – when they gathered together, they made sense. It was an unscientific, natural, instinctual process. I just wrote down a ‘dream list’ of contributors I would love to feature in the type of anthology I had in my head, and almost all of them agreed, apart from maybe one or two who couldn’t contribute because of other commitments. However, I knew I wanted different forms, and I knew I wanted certain voices represented, such as Ailbhe Smyth and Nell McCafferty. I also wanted to be as representative and intergenerational as possible. My pitch was very loose – is there something in the back of your mind or in a notebook that you think might work? I’m not sure if this is the “correct” way of approaching these things, but I wanted to be surprised. That’s when you get the good stuff.

You also collected existing pieces of work to include in the book – how did you go about mixing those older works with the new pieces you had commissioned? Was it easy to fit them together? Did those older pieces add an historical element to the book too, or show some of the background to this moment?

There were certain existing pieces that I knew would work well. Emmet Kirwan’s ‘Heartbreak’ was one of those, a contemporary piece that is beautiful and urgent. Abortion is referenced just once in that poem, but the piece encapsulates a righteous anger and social reality that I feel lands beautifully. But the first piece I actually went after was Mary Coll’s poem ‘Laundry’. I read it in the Irish Times one day and it just floored me. The reason I included existing work is because I wanted to show how the words and art emerging from this moment exist. Including those pieces shows that the book is a reflection of how artists and writers are responding to their environment, that the anthology is not an artificially constructed work. I think the existing pieces give a context. Caitlin Moran’s contribution came about when we were drinking in her shed-office during an interview I was doing with her. I mentioned the anthology, and she said if there was anything she could do, to give her publisher a shout. I was already familiar with a piece she had written about her own abortion, which is so brilliant and honest, and knew that having an English voices in the anthology would be important because of how so many Irish women end up in England seeking healthcare. I was pretty hammered when I left her house, so I’m glad I remembered to follow that one up.

When you were first reading the pieces as they came in, were there any particularly impactful or meaningful moments? Anything that you read that really stopped you in your tracks?

Lisa McInerney turned around a short story in a frighteningly swift manner. The fact that the piece she wrote is so brilliant goes to show what a pro she is. Kitty Holland’s piece is phenomenal, particularly when as journalists we often have emotions beaten out of us. The word ‘brave’ is overused, but that was a seriously brave piece to write. Sinéad Gleeson’s short story is stunning. I mean, everything is good. But Anna Cosgrave at the Repeal Project collated some personal stories of women who have had abortions, and every time I read one of those I cried. It just kept bringing home to me how real and raw this is, and the injustice of the eighth amendment.

You went down the crowdfunding route with Unbound – how did that impact on the process of putting the anthology together?

I have to say, working with Unbound has been a brilliant experience. The technical and logistical support they offered with the crowdfunding side of things allowed me to get on with commissioning, collating, and editing pieces. I do think that when people are supporting a book via crowdfunding, the audience feels more invested in the project – and not just financially. It made me want to make the best anthology possible so that those who donated to it were rewarded for their generosity. I hope I achieved that.

Did you take any particular lessons from what you’d done with In the Name of Love? Did you see this book being in conversation with the earlier one in any way?

I still have PTSD from writing that book! It was a mammoth task, and anytime an idea for another oral history crosses my mind, I take a cold shower. Hashtag never forget and all that. It’s definitely one of the most arduous, time-consuming ways to write a book, and I’m not even quite sure how I did it. To be perfectly honest, putting together a collection of other people’s writing was an infinitely easier task. But I do think they are in conversation with one and other. They are both capturing moments in time, they are both about social change, they are both about Ireland, they are both about people being in opposition to theocracy, they are both about grassroots movements. I’m really proud of In the Name of Love. It’s a book that nerds love, and I dig that. People who get it, really get it, they get it structurally, how the reader is given an opportunity to extract their own interpretation of the facts, and how different ideas bumping up against each other with no absolute truths presented is more rewarding than being “told what happened.” In some ways, there is a similar open-ended aspect to Repeal the 8th. Points of view are on a spectrum in both.

How do you think artists and writers have impacted on the campaign to Repeal the Eighth, in terms of pushing for the referendum in the first place, but also in setting the terms of the conversation? Do you think they have a role to play in making very complex issues more accessible, or clearer for people?

All social change is creative. Artists are, and will continue to be, central to revolution, to activism, to protest, and more broadly to telling us stories about ourselves. I’m not sure if artists simplify things, I think they address the complexities. Art lives in the nuance, it is the subtext of our environments. More directly, design has played a huge role in this movement, from the Repeal jumpers to Maser’s mural, art has been a mobilising force. That’s one of the reasons I wanted to include photography, art, apparel, and graphic design in the anthology.

Do you feel each form had its own strengths? What do you think photography or poetry can do in this context that, say, a personal essay or a newspaper column cannot?

I definitely feel each form has its own strengths, each does something another cannot. Portrait photography has offered a literal face to the movement. Poetry is everything, though, isn’t it? Everything starts with poetry for me. It captures things we already know in the deep recesses of our beings but look to the poet to tease out. Polemic can nail an argument, but poetry can emotionally live it.

Times like these can be so hard for people, I feel – moments when the most intimately personal experiences become the subject of national debate. What would you say to people who are nervous, who aren’t quite sure how to help, or who might find the political situation upsetting?

Do you play poker? I would say: play the cards, not the (wo)man. It’s very easy to get caught up in the noise of campaigning, particularly when the No side is so ridiculous and inflammatory. But it’s all about focus. The aim is to get as many Yes votes in those ballot boxes as we can, and we all have a role to play in that. Do whatever you can do get Yes voters mobilised in your family, peer group and community, and tune out the noise. I reckon every motivated Yes voter can get dozens of other Yes voters on board. So do that. Real life conversations and face to face interactions are what work most effectively. Aside from that, make sure you take time to chill and have fun and relax when you can. Going for a daily walk is a mighty tonic.

Finally, how are you feeling about the referendum yourself? Are you excited, confident, anxious?

I don’t think I’ve ever felt as motivated about anything in my life. Nothing worthwhile is ever easy, and this is a real battle. But we have a moment right now to change the world, and if we all stick together, no one is going to take this from us. But we have to leave everything on the pitch. There is no room for complacency, everyone knows that. Do everything you can right now to bring people in your life on side, and make sure they vote Yes. This is going to be tight. It is an urgent situation and we simply have to get it over the line. There is no plan b. Do not wake up on May 26th thinking you could have done more. Act now.

Repeal the 8th, edited by Una Mullally, is available now from Unbound.