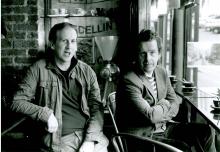 The Stinging Fly is delighted with the announcement in Dublin tonight that Kevin Barry has been awarded the 2013 IMPAC Dublin Literary Award. Kevin’s City of Bohane was on a shortlist of ten novels competing for what is the world’s most valuable annual literary award for a single work of fiction published in English.

Kevin first came to our attention when he was shortlisted for the 2004 Davy Byrnes Irish Writing Award—we then went on to publish several of his stories in the magazine during 2005 and 2006. In March of 2007, The Stinging Fly Press was privileged to publish Kevin’s debut collection of stories, There Are Little Kingdoms, a highly lauded collection that subsequently won the Rooney Prize for Irish Literature that year.

That first book continues to sell really well in Ireland (the most recent reprint was in January this year), and Kevin has of course gone on to find legions of loyal readers internationally with his new publishers: Jonathan Cape/Vintage in the UK and Graywolf in the US. And rightly so.

It is a great pleasure for all involved with The Stinging Fly to see how well Kevin has done. Long may he write!

Praise for There Are Little Kingdoms

‘Could easily have been titled These Are Little Masterpieces. Barry gathers all the bewildered exasperation that Irish playwrights from Tom Murphy to Marina Carr and Enda Walsh have identified, and brings it, most brilliantly, to his dark, blackly hilarious and horrifically realistic narratives.”

Eileen Battersby, 2007 Books of the Year, The Irish Times

“Kevin Barry has produced a collection of vibrant, original, and intelligent short stories, and a number of the tales contained in There Are Little Kingdoms deserve to be read and reread, and to outlast the strange years that made them.”

“Kevin Barry is among the brightest and most delightful new voices in Irish fiction.”

“A brilliant collection of short pieces which showcases both the fine poetry of Barry’s language and the deep-seated humanity of his comic ramblings. The characteristic milieu is a small Irish town, usually in the midlands, its denizens scratching out quietly desperate lives as they wait unknowingly for the coming economic boom. Barry understands these micro-societies: he clearly sees their petty-mindedness, jealousy, violence, chicanery, alcoholism and endless nights of hanging around. But he still finds goodness in all possible places, while also presenting these grimy dramas in some of the most beautiful and lyrical writing ever composed by an Irish writer.

The Fire at the Ritz

i want to live up a steel spiral staircase