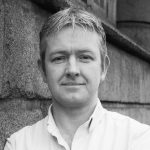 The Stinging Fly Podcast returns for its March edition, with Colm Keegan joining Sally Rooney to read and discuss ‘The Cavalcade’ by Sean O’Reilly, a dark narrative of sexual power games which first appeared in our Winter 2013 issue.

Colm Keegan is a writer and performance poet from Dublin, Ireland. Since 2005, he has been shortlisted four times for the Hennessy New Irish Writing Award, for both poetry and fiction and won the All Ireland Poetry Slam in 2010. In 2015 he was awarded a residency in the DLR Lexicon, Ireland’s largest public library. He is a creative writing teacher and co-founder of the Inklinks Project, a creative writing initiative for young writers. He is a co-founder and board member of Lingo, Ireland’s first Spoken Word festival.

Colm’s debut poetry collection, Don’t Go There, was released in 2012, and his second, Randomer, has just been published by Salmon Poetry.