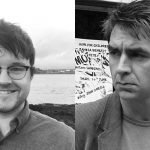 On this month’s episode of the podcast, editor Danny Denton is joined by writer John Patrick McHugh, to read and discuss Sean O’Reilly’s story ‘All Day And All Of The Night’, which first appeared in our Winter 2011 issue.

John Patrick McHugh is from Galway. His fiction has appeared in Winter Papers, The Tangerine, Banshee, Granta and The Stinging Fly. Pure Gold, his debut collection of short stories, was published by New Island in February of this year, and by Fourth Estate in June. He is currently guest editing an issue of Banshee.

Prayer for a Happy Death