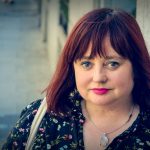 Our first podcast of 2018 sees June Caldwell pick Claire-Louise Bennett’s powerful and deeply unsettling ‘Morning, 1908’ to read and discuss with Sally Rooney. The story was first published in our Winter 2012 issue.

Claire-Louise Bennett’s short fiction and essays have been published in several publications including The Moth and The Irish Times. She received the inaugural White Review Short Story Prize in 2013. Her highly acclaimed first book, Pond, was published by The Stinging Fly Press in 2015 – and is available in the UK from Fitzcarraldo Editions and in the US from Riverhead. It has been also translated into several languages.

June Caldwell worked for many years as a journalist and now writes fiction. Her first collection of short stories, Room Little Darker, was published in 2017 by New Island Press. ‘Upcycle’, a story from that book, was nominated for the short story of the year at the Irish Book Awards 2017. Her story ‘SOMAT’ was published in the award-winning anthology The Long Gaze Back, edited by Sinéad Gleeson and was chosen as a ‘favourite’ by The Sunday Times. She is a prizewinner of the Moth International Short Story Prize and has been shortlisted for many others. She has an MA in Creative Writing from Queen’s University Belfast, and lives in Dublin.

The Stinging Fly Podcast invites Irish writers to choose a story from the Stinging Fly archive to read and discuss. Previous episodes of the podcast can be found here.

How Do We Know What We Know?