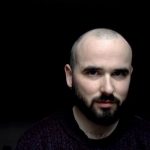 On this month’s episode of the podcast, host Nicole Flattery is joined by writer and editor Michael Magee to read and discuss Louise Kennedy’s short story, ‘The End of the World is a Cul de Sac’.

Michael Magee is the fiction editor of The Tangerine and a graduate of the PhD Creative Writing programme at Queen’s University, Belfast. His writing has appeared in Winter Papers, The Lifeboat and in The 32: An Anthology of Working Class Writing. Close to Home, his first novel, will be published by Hamish Hamilton in April 2023.