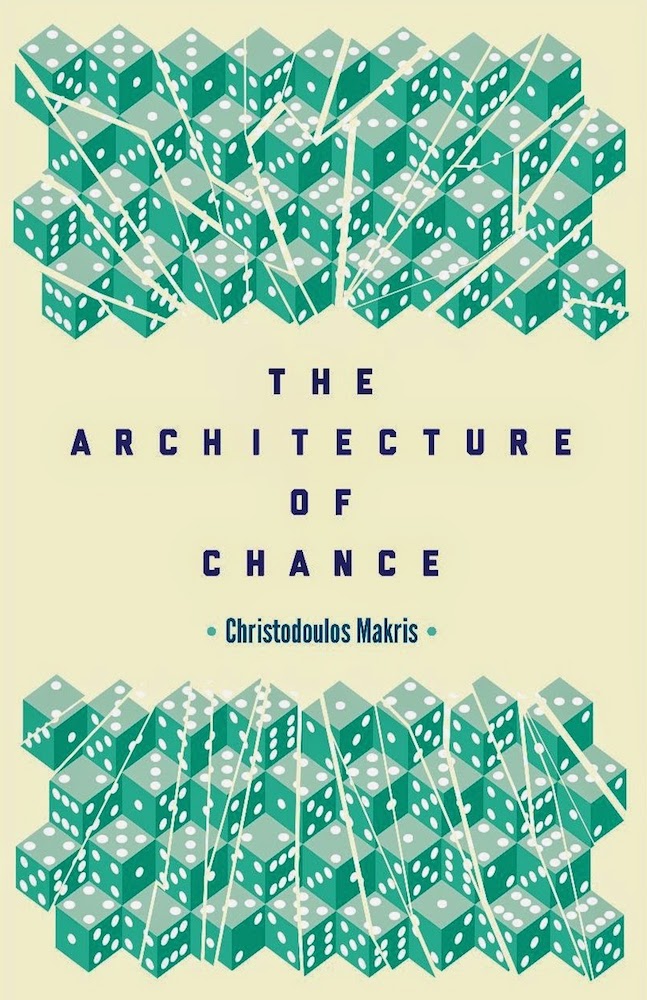 The Architecture of Chance / Pirate Music

The Architecture of Chance, the second collection from Christodolous Makris, is a book concerned with its own methods of composition and, in turn, the relationship between its methods and the wider world of ‘poetry’. Its compositional methods are wide-ranging: among them are poems written with Oulipo-esque formal constraints, collage poems from found/appropriated text, emails presented as poems and a Twitter data widget poem. This list is not exhaustive and there are also many narrative poems, poems I hesitate to call traditional. This focus on composition moves towards explaining the book’s title, its paradoxical concern with orchestrating multiple possibilities. In the fourth issue of Poetry Ireland’s ‘literary pamphlet’, Trumpet, Christodolous Makris contributed an article on ‘ways of writing’ which includes this:

writing that relies on tried and tested methods of composition and on the perpetuated myth of the sole inspired genius is insufficient and increasingly irrelevant in our era of multiple cross-culture, cross-border and cross-language connections.

The first poem in the book, ‘Scales’, is an abecedary that works its way up the alphabet and back down again three times. This method of arrangement produces quirky collisions: ‘Randy sailors turn uninitiated vicars, whip xenophobes, yodel zanily.’ It’s a surface humour, but it’s endearing: ‘Janitors investigate honorary guests. Females elope, defying common betrothal agendas.’ It’s not chance, however, that dictates how many of the book’s nonformal themes are presented in this poem. There are ‘Xenophobes’ and ‘moustachioed nationalists’. There are ironic imperatives to ‘Assist burly constables’ and to ‘Read speeches totally undermining visiting workers’. If this poem has a point, it’s to bring some attention to the ills of ‘desperate capitalists’. Life in a late-capitalist society is interrogated throughout the book and Makris hints that the ‘poetic voice’ is an affectation for self-serving purposes in ‘Sincerely’:

Friendly, polite,
I have years of experience at home and abroad.
I’m looking for a job in your office/factory/shop
(preferably full-time).
I’m a good listener, well-educated,
I relish working in teams,
and I wish to build on my language and communication skills.

Of the book’s many collage poems, ‘Metro Herald’s Advertorial Wind Bags Let Loose, 28-31 May & 4-7 June 2013’ is the least successful. This commissioned work responds to the ‘Aeolus’ episode in Ulysses and reworks ‘Letters to the Editor’ and adverts in the aforementioned newspaper. The  half-nonsense created when Makris grafts together the letters and ad copy is wry and unsettling: ‘Summer has literally sprung upon us. Irish owned and operated, it now ranks as the most convoluted system in the EU.’ The poem fails not because of its text, but its title. An opposition to the ‘perpetuated myth of the sole inspired genius’ is undermined by naming the letter and ad writers as ‘wind bags’ and the implication that the poet is above these unnamed others; the reader is expected to buy into this. The title preaches to the choir, suffocating the interesting textual uncertainties of the collage.

The opposite is true of the book’s most successful use of pre-existing text, ‘XXXXX’, which quotes correspondence from an Irish poetry editor. The letter or email is reproduced in its entirety with three elements redacted: the name of the publishing house, the location of a previous conversation, and the editor’s name. The correspondence details how the editor has not started to read a submission by Makris and the possible ‘problem’ of nationality (only work by ‘Irish authors’ is considered). Curiosity drives the reader to wonder who the unnamed editor might be. In the Trumpet article mentioned earlier, Makris writes that:

although the poetry world is small, especially in Ireland, divisions between those working in different modes tend to result in even smaller factions. The lines become vividly drawn, and at times lead to bemusing spats and feuds. Labelling poetry in nationality or other identity terms functions as an extension of this tendency to separate.

‘XXXXX’ enacts the objectionable categorisation of poetry by nationality in this poem’s clean, complete concept.

The Architecture of Chance is a dense book and there is much more to be found and enjoyed in it than space here allows. It will be of interest to anyone who wants to read poetry that questions its own methods. It is a worthwhile, idiosyncratic addition to the landscape of poetry published in Ireland.

Pirate Music, Miriam Gamble’s second collection from Bloodaxe, plays a different game to The Architecture of Chance. If Heaney took the English lyric and made it eat stuff it hadn’t eaten before, then Gamble makes it eat with its mouth open:

On the ferry to Larne, someone shouts ‘That cunt of a curtain!’
and you’re back where inanimate objects have malicious intent;
where soft furnishings are mischievous,
looking for trouble, and white goods present a staunch, rebellious mien
when, in levering them into the perfect slot, your da… encounters problems.

The way in which the stasis of post-Troubles/post-Agreement(s) Northern Ireland—the era of the bomb-scare but not the bomb—and the performative paranoia of its citizens is pastiched (note ‘staunch’ and ‘rebellious’ side-byside) in these lines from ‘Personification’ captures a small part of the prevailing spirit of the book. Old arguments are given a startling and irreverent new spin. MacNeice wrote in ‘Valediction’ that ‘I cannot deny my past to which my self is wed’ and there’s something of that in Gamble’s poetic ambit.

Her background and literary heritage (the short biography at the front of the book tells us that she grew up in Belfast and wrote a PhD in contemporary British and Irish poetry) are grappled with in a mode which is marked by what appears to be lyrical directness, but there is no room for misty-eyed reminiscence, no unchecked reliance on sentiment. At the same time, there is little of the circumlocution or obliquity that marked the Carson-Muldoon-McGuckian generation. Poems that take childhood or adolescence as their subject confirm this: ‘Macken’s Van’, featuring a van-shop, begins with the line ‘Macken is fucking terrifying.’ ‘Films about Ghosts’, a poem about or including the act of taking oneself very seriously during adolescence, includes the question-and-response ‘Are these the makings of nostalgia? Fuck, I don’t know.’ This is not to say that Gamble’s poems are simple or simplistic: her intelligence and learning are worn lightly, her ear for rhythm is completely convincing. The poems in this book are certainly ‘well-made poems’, but they’re well-made on her own terms. Phrases from Yeats and other luminaries turn up, metamorphosed, as in ‘Misrecognition’, a poem about ‘educating’ a computer, where she writes:

‘I indoctrinate it thoroughly
in punctuation, in possessives and plurals,
the troubled history of the Belfast mural.
I teach it fashion, and haute cuisine.

But oh, its radical innocence!
When it says, “And that is twenty pines, please”,
or “The pound trees are wrecking the ecosystem”,
I swear, Your Honour, it isn’t coming from me.’

Her wit and tone is at once earnest and sly, and I am thoroughly in favour of anyone who can take the piss out of Yeats without being the slightest bit out of their depth. This overlap of irony and sincerity is also at play in ‘Childhood’, where the machinations and pitfalls of patriarchal structures are thrown into relief as the poet ‘remembers’ horse-riding lessons:

and anyway buying ground is a badge of honour
round here

Elsewhere in Pirate Music  there are what might be crudely termed ‘animal poems’ (‘Bower Bird’, ‘The Mare Spikes a Glassy Loch’, ‘The Brutality of Koala Song’ among others) that anthropomorphise all manner of birds and beasts in refreshing ways. The ‘Bower Bird’—have a look for the Attenborough clip—is exemplary:

he will sprain
what intellect’s
amassed in
his tiny skull
toying with the heavenly
and unanswerable question
of
what a feathered female wants,
what may be guaranteed to bag one—

and she comes
and it is not quite
what she had envisaged,
personally, in her heart
of hearts—
down the leaf-strewn path there is
a better one—
the flower was
a fatal error—
and suddenly, so
suddenly,
his work is done

Above all, this book is a joy to read. Its gritty personability and the accuracy of each poem’s logical trajectory is engaging on the first reading and its knotted intelligence ensures a little more on each subsequent reading.

Stephen Connolly is from Belfast. His poems have recently appeared in POETRY and Poetry Ireland Review. New poems are forthcoming in The Irish Review.

How To Edit Your Own Lousy Writing