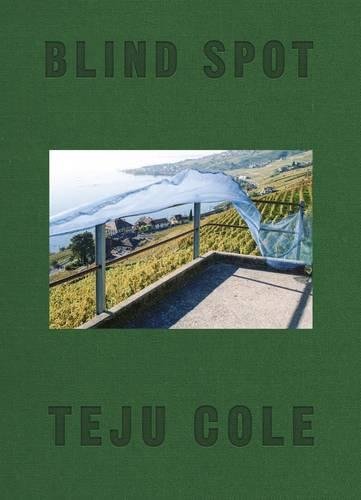 Followers of the Nigerian writer Teju Cole’s career will know of his interest in photography, both as a critic (for The New York Times) and a practitioner. After his breakthrough, Open City, his American and British publishers resurrected his obscure debut, Every Day Is For the Thief, an account of corruption and survival in Lagos, and it was no surprise to find it peppered through with the author’s own Robert Frank-esque, on-the-run photos of contemporary Nigerian life. Open City itself read like a photography book without photographs – the story of an African man’s wanderings in New York City, and his alighting on visual details that triggered intense journeys in memory and thought.

‘Aren’t all the photographs and texts, the fragments and experiments, even the things you say into a microphone, even the things you don’t say, aren’t they all instalments toward a unified project?’ he quotes an interviewer in one of the texts attending the photos in his latest work, Blind Spot. The interviewer goes on: ‘I have always felt that Open City was one way you approached the problem. You’re still circling the problem now…’ The interviewer, and Cole in quoting her, doesn’t identify what that ‘problem’ is, as he’s not that kind of writer – he’s a ceaseless, torturous questioner, constantly opening systems. Neither is he that kind of photographer.

Like Cole, I’m an account holder on the photo-sharing website Flickr, and I’ve been keeping track of his photography for years, although typically for the ghost town that Flickr has become he hasn’t uploaded a new photo to the site since July 2015. Blind Spot is his most photo-heavy book yet, and reading it (for it’s not a photo book in the traditional sense), I frequently experienced a sense of déjà vu. Hadn’t I seen this photograph before? And this one? And this? Which of course I had: many of his hundreds of Flickr photos are reproduced in the book. In one way the déjà vu feels like any other – the thing being seen in the here and now feels identical yet paradoxically different, somehow, from the thing it reminds me of. With Cole’s photos, that difference is, I’m sure, the difference between a picture through which light beams (on a computer screen) and the same picture off which light bounces (on a page).

Blind Spot’s 150-plus photos will stimulate a different order of uncanny in anyone coming to them for the first time, because the set’s ostensible unifying theme is its recognisable everyday blandness. For a collection of scenes from twenty countries (a map at the back of the book shows you where each picture was taken) there is nothing exotic about it, and very few of the photos convey the ‘essence’ – even one that satisfies a false expectation – of a place. (Perhaps only two, one of the rooftops of Sao Paolo, and one of a green Alpine hillside, are truly, transportingly, sublime.)

At a glance, or quick flick-through, then, the cumulative effect is banality. So many of these scenes could literally have been observed anywhere. Scraps of cardboard on a dusty street; a swathe of botched plaster work; the corner of an untended swimming pool, soupy with algal flora; a smear of paint on the glass panel of a door; the imprint of tyre treads in a patch of mud; a desk lamp, its wooden stand carved in the shape of an elephant. Objects are spent; action, where it is captured, is static. This is not the dynamic street photography of a Garry Winogrand or Bruce Gilden, or even of an earlier Teju Cole. Nor is it in the style of the sumptuously saturated still life of William Eggleston or Martin Parr, say. It’s purposely harsh, artfully unmediated. The photographer obviously hasn’t chased the light of the magic hour or of the dawn sunrise; often it appears he’s snapped at midday, when the sun is high and the contrast astringent. He’s clearly left his aperture at a miserly setting in order to bring out the sharpest depth of field. I’m certain all of these shots were taken using film cameras – if memory serves, Cole’s favoured tools are an Olympus XA and a fancier Leica. But they could easily have been captured with the icy blink of a digital camera. It must be said that his icy clarity is beautiful – minty cold.

It’s tempting to think of these pictures as global photos for a globalised, flattened-out world, but Cole would never be interested in making so trite a statement. Rather, they are photos connected by tangents to the universal in all human cultures – tangential, because they are jumping-off points for typical Coleian meditations on culture and society and the self. The sense one often gets, though, is that the spark that has fired the photographer’s thoughts lies just out of frame, and that what we see in frame is the scene as his pupils list to the side and then come to rest and the direction of his vision turns inward. The title, Blind Spot, refers to a spell of temporary blindness that Cole suffered a few years ago. But it’s also a metaphor for these lingering extra-peripheral details.

Cole has led an amazingly peripatetic life since Open City brought him fame and acclaim. I used to track his movements via his photo subjects on Flickr, and envy how residencies, festivals and academic work took him here, there and everywhere. Some of the place names here are resonant with history, and that history may be addressed in the text: for example, beside a photo taken in Selma, one of the battlegrounds of the US civil rights struggle, Cole mentions how he walked the route of a famous 1965 march that ended in violence. The texts attending his Wannsee photos are abstruse, but beg to be read in the shade of the Nazi horror. On one occasion a global news event is serried with the deeply personal: that gloopy-green-swimming-pool photo, taken in Nairobi, is matched with a text about the author’s presence in that city at the time of the Westgate shopping mall massacre, in which his friend, the poet Kofi Awoonor, was killed.

Texts for another sub-set of photos, taken in Lebanon, are immanent with the biblical. Another group of texts, for a cluster of photos from Switzerland, the home of Calvin, is heavy with references to the Protestant Reformation. The religious theme carries through in the photos like a flash of light that slowly degrades in the eyes after the gaze has turned away: a direct address on the cloth that swaddled the dead Christ primes our reading of the many subsequent pictures of swaying or folded or ragged or plumped and voluptuous fabric. (Is he an evangelist, I found myself dumbly wondering at one point? This line disabused me: ‘I pray to Tarkovsky, Marker, and Hitchcock.’)

Many of the places have no obvious link with whatever thought led to a photo being taken there. Where the author travels, his freight comes too. A picture of some nondescript street furniture in the upstate New York town of Rhinecliff is matched with a text on the ailing Seamus Heaney, post-stroke, and his subsequent death. These are jetlagged texts. The travel is as relentless as the instinct for inquiry. Worlds, geographical and intellectual and mythological, merge and blur.

It has another relevance, ‘blind spot’: that which is left out of the texts. They’re as packed with reference as anything in the writings of Joyce. The Nairobi photo had me scuttling to read up on the details of the terrorist massacre, and it was only then I learnt that the death fleetingly mentioned by Cole was that of his poet friend. Likewise the Rhinecliff text: it was only by googling the lines of verse quoted that I discovered it was about Heaney. I look on the texts as a road-map for reading – on world events, on the foundational canon. It’s of a piece with the jetlagged, dream-like feel. Just as our reading, learning and, most especially, memories inform and disturb our dreams, Cole’s immense mindscapes shimmer beneath the tight surface of his writing.

In a text beside a photo from Btouratij, Lebanon, he says: ‘Often when you read about a dream, or see a depiction of one, you feel like you’re reading about or seeing something that isn’t a dream.’ Not accidentally, the Lebanese images are spaced through the book rather than grouped together. As are the Selma images, the Wannsee images, the Swiss images. The pictures – a procession of banal stuff that seems infused, and really must be infused, with greater meaning, in whole as in its parts – mimic the weird recurrences, recursions and importunities of dream-thinking. Blind Spot is a book of dreams, perhaps one of the very few successful ones, and Cole, in the Btouratij text, in a typically perpendicular fashion, has announced it.

Gavin Corbett is a Stinging Fly contributing editor. He is the author of the novels Innocence, This Is the Way, and Green Glowing Skull. A book of his photos, The Giving Light, is due to be published later this year by Hi-Tone.

In Praise of the M6

I Just Know That Something Good Is Going to Happen