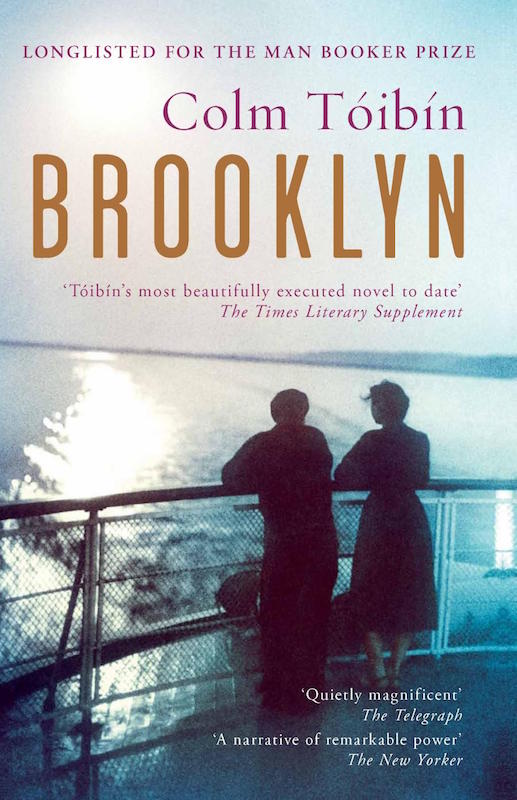 ONCE AGAIN, COLM TÓIBÍN WORKS a fascinating alchemy in his most recent novel. While working with the sparest and most ‘scrupulously mean’ of prose styles, he produces a reading experience of astonishing emotional force. Embedded in a seemingly banal flow of naturalist narration are deeply affecting insights into human attachments and the peculiar qualities of loss, grief and love.

In outline, the plot of Brooklyn is simple. Set in the 1950s, it concerns a young woman who emigrates from Wexford to New York; just as her new life is taking shape there, a family tragedy brings her back to Ireland where she is confronted with a decision about her future. Thematically and structurally this is not a novel on the scale of Tóibín’s last, The Master, with its densely layered psychological portrait of Henry James and its chillingly incisive anatomy of the creative labour and emotional ruthlessness required to write fiction. Nevertheless, Tóibín compresses a tremendously powerful emotional impact into this deceptively straightforward emigrant story.

The description of Eilis’s first few months in New York, for instance, viscerally captures that maelstrom of sensations which besets the newly-displaced immigrant. The incessant anxiety and trepidation; the exhilarating yet wearingly endless flow of new experiences; the glimmer of possibilities and new beginnings that is always at risk of being extinguished by the pervading darkness cast by loneliness, sorrow and loss. Perhaps the most effective device for capturing these experiences used in the novel is the description of Eilis’s dreams. The disjunction between her sleeping body in Brooklyn and her dreaming mind in Wexford captures most strikingly the psychic dislocation of the immigrant.

Interestingly, though their novels are entirely different in historical setting and style, one could argue that Tóibín has followed Joseph O’Connor (in Star of the Sea and Redemption Falls) in bringing the historical Irish experience of emigration into contemporary Irish fiction. Using the novel to facilitate our cultural confrontation with that history, what we took to calling the Irish ‘diaspora’ in the 1990s, is clearly just as much about Irish literature responding to our present as a nation confronting the challenges of immigration. Arguably, this literary excavation of our past—with all its trauma, tragedy and hope—is a more incisive and fruitful response to the challenges of the present than those blithely ‘multicultural’ literary responses to the recent immigration in which we are all cheerfully encouraged to just get along; one thinks here of Roddy Doyle’s recent ‘updating’ of The Playboy of the Western World with a Nigerian ‘Christy Mahon’.

The great paradox of Tóibín’s style as a novelist is that he is at his best when he is articulating silence; that is, when he is capturing the web of unspoken emotional undercurrents circulating powerfully in the banal silence hanging between his characters. In this novel, some of the most affecting of these occur between Eilis and her mother in advance of Eilis’s departure. His skill lies in giving imaginative shape to this silence without altering its peculiar quality. By successfully giving it expression in his writing, Tóibín appears to be negating the silence—replacing it with its opposite. Yet, the particularly rich and expressive quality with which he evokes this space of silence between his characters suggests that he is not diagnosing it as the unhealthy absence of speech; for Tóibín, such silence is not necessarily the enemy of love but can indeed be the medium for its transmission.

This idea also shapes Tóibín’s approach to history in the novel. In his earlier novels, particularly The Blackwater Lightship, the movement from silence to speech within the family was mapped as a journey of evolving psychic well-being. But it was also mapped temporally across generations, and thus the family drama also came to stand as an allegory of Irish history and modernisation in the second half of the twentieth century. However, while Brooklyn is set in an era of recent Irish history, the 1950s, that is now overwhelmingly associated with repression and gloom in popular discourse, it is striking that this novel concentrates on hopefulness and possibilities.

Though the lack of employment in Wexford means that Eilis has to emigrate, and while New York offers her exciting opportunities for education, for work and for romance, by the end of the novel Eilis finds herself with the potential for achieving fulfilment and happiness on both sides of the Atlantic. Her choice is not the predictable one between dreary family duty at home and the glamour of individual fulfilment away, but rather a choice between two equally compelling promises of potential happiness. As always, this plenitude of choice is, of course, bittersweet since the gains of either choice must invariably bring with them the loss of the other. This is the ambiguous note on which the novel ends, as Eilis wonders to what degree in the future her regret at the choice not taken will come to darken and overwhelm the happiness attendant on the choice she has made.

Thus, Tóibín’s generosity towards his characters—like Grace Paley he believes that ‘everyone, real or invented, deserves the open destiny of life’—extends in this novel to his generosity towards the past. Politically, this quality of generosity can often be exasperating in Tóibín since it can sometimes appear as the type of liberalism that merely masks a conservative attachment to the status quo, as with his recent much-publicised gesture of solidarity with the disgraced banker Michael Fingleton. Yet, Tóibín’s writing also exemplifies a genuine commitment to what is best and most admirable about liberalism: that open, spontaneous impulse to forge bonds of imaginative sympathy.

Gliding down the Slaney exalted