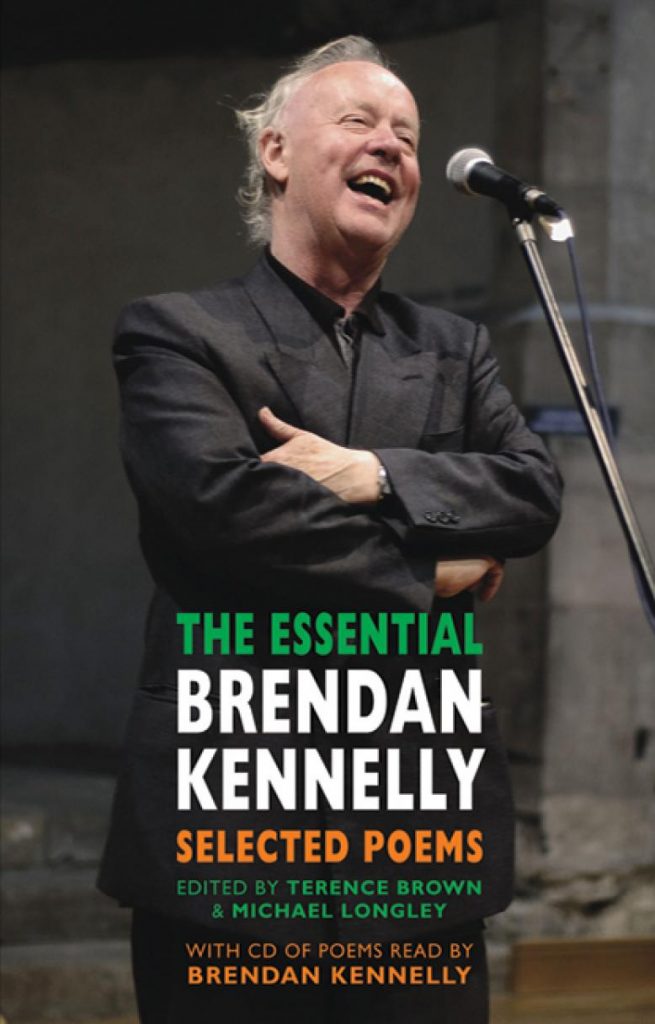 To mark the 75th birthday of Brendan Kennelly it is we the readers who have been given a gift in the form of Bloodaxe’s new edition of selected poems by the great Irish poet. As a British reader it is hard not to wonder at Kennelly’s peculiar position within the canon of contemporary poetry, and more particularly, why he doesn’t enjoy the same standing as near-contemporaries such as Paul Durcan. Terrence Brown and Michael Longley have written a generous and also tenderly honest introduction in which they state their ‘hope that this selection will allow readers to appreciate anew, or for the first time,’ Kennelly’s body of work. The editors have chosen to order the poems chronologically, moving against what they highlight as Kennelly’s preference for arranging his work thematically, and thus one is immediately given a sense of the trajectory, the major ideas and the pressing preoccupations of Kennelly’s five decades of poetry. The editors are honest enough to admit that some of Kennelly’s missions, such as his attempt ‘to impose […] a different kind of rigour’ on his work, are ‘perhaps not always successfully’ achieved. It is worth mentioning that such editorial honesty is refreshing and makes Brown and Longley’s praise of Kennelly seem all the more genuine.

The first sixty-six pages of the book provide a generous selection of Kennelly’s work B.C. (before Cromwell) and offer insight into the early mind of the poet in development. Highlights include a beguiling poem, ‘The Gift,’ which uses a directness of language and speech to coax beauty out of the everyday. Its everyday imagery—‘Small and hesitant/Like children at the tops of stairs’ and ‘It came through shops, rooms, temples, /Streets, places that were badly-lit’—shows that, from the very beginning, Kennelly was able to achieve what is the hallmark of all our greatest writers: the creation of poetry without reducing oneself to overly convoluted or pretentious language. ‘The Kiss’ is a similar achievement with the haunting last line ‘Ten thirties would not make me forget.’ But ‘The Names of the Dead are Lightning’ is one of the most powerful pieces from these early selections:

Father, why does the sound

Of thunder make me seek
The darkest room in the house?

Kennelly’s anxieties and themes—of family and genealogy, of place, of religion and spirituality—all seem alive in that question.

The biggest selection from any single volume comes from Cromwell and rightly so; it is a major achievement. Edna Longley called it ‘this extraordinary, extravagantly Irish act of revenge.’ It is true that to read only a small sample of Cromwell is to not do it justice, yet many of the high points are included here: ‘The way it leaned down on me then I felt/Like a pound note pressed inside a wallet’ in ‘The Ceiling,’ or the arresting, abrasive completeness of ‘A Language.’ Needless to say, the full experience can only be gained by immersing oneself in the complete work. I shamefully hadn’t read the entire book before; I went straight out to get it after reading this selection. In that sense the book achieves its aim of getting more people to reconsider or newly consider one of the most intriguing long poem sequences of the late twentieth century.

What follows Cromwell is another generous selection, this time from The Book of Judas and then a smaller selection from Poetry My Arse; these being the three books which make up what Brown and Longley call Kennelly’s ‘three major works’. The poems included from The Book of Judas again offer numerous reasons to visit/revisit the complete collection; ‘prades’ and ‘skool’ seem, with hindsight, to predict and perhaps also to be lampooning what later and younger poets would attempt to introduce—a language which matched that of new technology and contemporary slang. Here Kennelly uses it to evoke accent, place and class in a humorous way; ‘shuv your iggerance up your bleedin hole’. ‘The Experiment’ sees Kennelly at the top of his game; plain speaking but allegorical, everyday and yet allusive, conscious of the historical and the contemporary:

Theories of origins vary, yet all are agreed
Somewhere along the line, for reasons hard to grasp,
The experiment went wrong.

There is less on offer from more recent collections. This work as a rule appears much more compressed and sparse, perhaps bringing to fulfilment ideas which have been floated from The Book of Judas onwards. The three-liners from Now (2006) and the sometimes longer poems of Glimpses (2001) and Martial Art (2003) seem to recall Paul Durcan’s witty two-liners. But where Durcan’s couplets undercut tension with bathos and a deep sense of fear and loss, Kennelly seemingly extends the form into something much more plainspoken and yet broader in scope; like a spiral which, through its own contraction, becomes more intricate and more beautiful. ‘Odyssey’ recalls the heartbreak of Durcan’s couplets without the underlying melancholy humour:

She trudged a long way through mucky fields to feed birds.
She heard them singing afterwards.

Just one poem from the 2009 Reservoir Voices is on show, ‘Poem’, which opens out from didacticism into a parable on Kennelly’s own poetic journey and the pressure he feels under, from the poetry sphere (other poets), the public sphere (his readers and his audiences) and the political sphere. In the lines ‘Who will say I’m art?’ and ‘[…] who is the person shaping to write me down?’ we are presented with both an acceptance of and anxiety about the poetic self. ‘Words are wild creatures. Fly them home’ Kennelly writes with profound ambiguity. ‘Most of the time’ the poet worries, might he merely ‘sing what you’d have me sing’?

The essence of Kennelly will remain in his ability to shock, to jolt and surprise; he will do what he’s always done—‘go wandering up the hill of shadows’ and he will continue to write. It will be for other people to say whether he is art, where he belongs in the canon. When a complete works of Kennelly appears it will surely enhance and secure his reputation as one of the foremost poets of his age.

The Essential Brendan Kennelly is just that, an essential education for those as yet unfamiliar with his work and an essential refresher course for those who have encountered him before. If Brown and Longley feel unsure about how the academic critics view Kennelly then maybe this is testament to a body of work which is so large, so eclectic and, indeed, still growing. Books such as Cromwell and finely selected editions such as this will hopefully ensure that Kennelly receives the attention outside of Ireland that he deserves.

the wolf of Ossory (OR: Of the prodigies of our times, and first of a wolf which conversed with a priest)

On the Far Side of the Thornbush