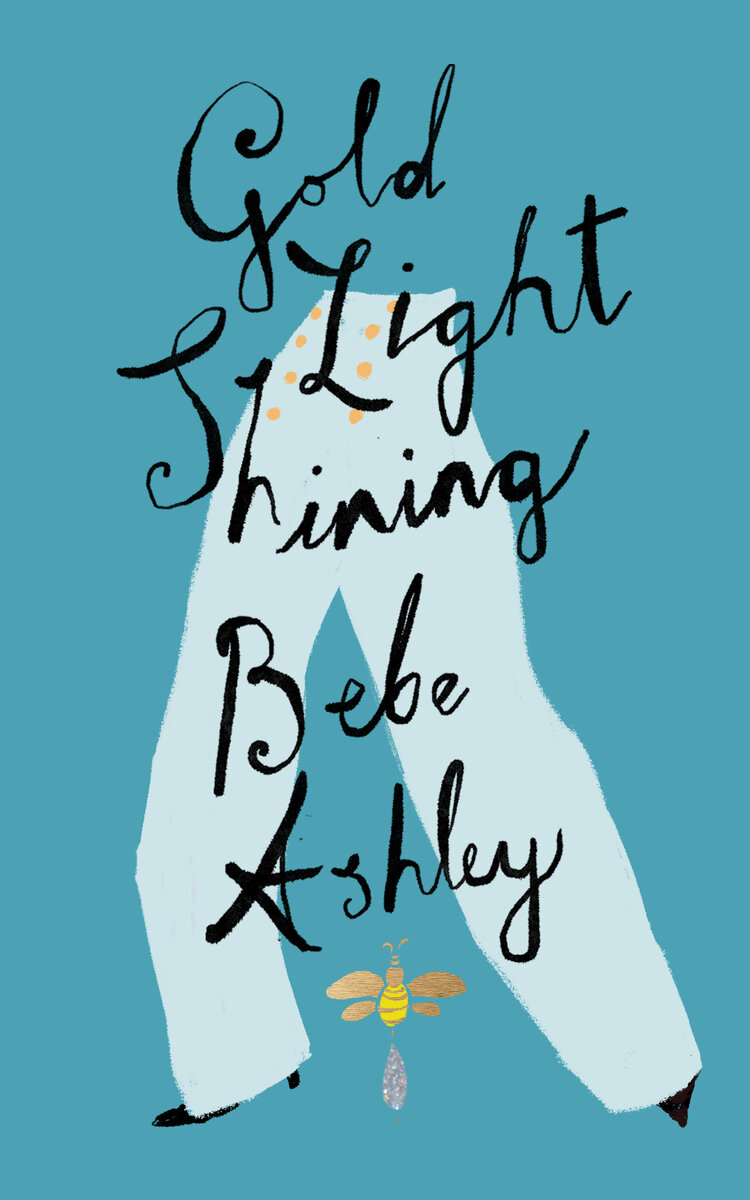 How would you feel if after reading an impressive debut collection of poems that accurately captures feelings of innocence, spectacle, lust, innocence lost, and belonging, you discovered that it was inspired by Harry Styles? If you’ve yet to read Bebe Ashley’s Gold Light Shining, or any of the press surrounding its release, that may very well be your experience. But where’s the fun in that? Ashley is an AHRC-funded PhD candidate at the Seamus Heaney Centre for Poetry, and this first collection is an ambitious meditation on music, fandom, projection, and yes, Harry Styles. I imagine the Harry Styles association could turn off as many poetry readers as it may delight, so it would be an unwise gimmick if there was no substance to the work. But thankfully, that’s not the case.

While the “boy band” brand has evolved over the years—even the Beatles were initially mocked for the sin of having a ravenous, girl gang fanbase—the “fangirl” moniker has always been used to underestimate the nuance, beauty, and depth of female fandom. In an interview with thehoneypop.com Ashley said: “One of my ambitions with this book is to re-empower the voice of the fangirl which is too often disregarded as hysteria without people realising that fangirls are also doctors, lawyers, teachers …” Beyond a kindred devotion to fangirldom (my first full-length book of poetry is named after a U2 song) I admire any work that seeks to bridge highbrow with what many consider lowbrow. Only a true culture-vulture, in the best sense, can see the links that bind the zeitgeists of the academic and pop culture worlds which, contrary to popular belief, do not operate in silos. (The Beatles moved from pop to classical instrumentation as their music evolved). I didn’t grow up around academics, or artists, so like Ashley I was introduced to a lot of literature through the music I listened to, and I transitioned to poetry without a traditional literature background. In a feature for The Honest Ulsterman, Ashley noted:

… I began to form connections to other literary works from Harry’s work and I really found the literary merit of creating a treasure hunt of his work through my own. He reads Rumi, he refers to Charles Bukowski in the lyrics of “Woman” with ‘you flower, you feast’, references Shakespeare, and Richard Brautigan’s In Watermelon Sugar.

Of course, millennial boyband ephemera can present as inaccessible to people of a certain age. What I knew about Styles was that he was formerly of One Direction and, more importantly, he was a former of one of my faves: Taylor Swift. But these poems are very much grounded in a recognisable young naiveté—and the poet’s own projections. In that same Honest Ulsterman feature, Ashley writes: “Through all of that, I finally understood the thing about Harry that I was most interested in: I don’t know him. Everything I’ve written about Harry is fulfilling a persona that I’ve constructed for him.” This admission and its subsequent project are brilliant and pragmatic solutions to never falling out of love.

The collection is divided into four sections of “fan” life whose meanings and groupings aren’t immediately apparent—and which allows the reader to apply their own meaning onto Ashley’s constructions. The first, “Fandom”, sets the (emotional-high-stakes) stage. The collection’s opening poem, “Kiwi / Kiwi / Kiwi”, ends with the straddling of innocence and experience, giving us multiple perspectives in a condensed space:

The guitarist who used to work in the pizza shop
looks to the bassist, the keys, the drummer

to know if this is normal. It is not normal
people are having the time of their lives.

“Fangirls”, the second section, is the collections’s most ambitious, dealing with the dynamics of interpersonal relationships, sexuality, commodification, and popular culture in matter-of-fact observations. Whether in couplets, prose, or long stanza forms, the poems usually take up half a page, with quick entry and exit points. Poems such as “Cinnamon Honey Butter” rival some of the most realistic and enthralling works written about teen devotion:

Popcorn spits and oil sputters from the open pan,
onto the stairwell and into the hands of a boy
who, eyebrows high and jaw slack, laughs
and throws it, catching it tightly between his teeth.
Not seasoned with the cinnamon honey butter,
but salted, it melts by the warmth of his tongue.

This sensual, sensory-specific writing is reminiscent of Jennifer Egan’s epic ode to music and teendom, the 2010 New Yorker essay, “Ask Me If I Care:”

Bennie’s shoes are off, and I watch his brown heels sink into the white cotton-candy carpet, so thick that it muffles every trace of us… She leans close to me, and inside her whisper I smell cherry gum covering up the five hundred cigarettes she’s smoked.

And that’s what fandom really is: living through the people that we idolise, in ways often beyond a sexual attraction. Watching MTV in the mid-90s I heard Margaret Cho say of the Beastie Boys’s Ad-Rock that she didn’t want to be with him as much as be him (a paraphrase). A high-schooler at the time, I had never before heard spoken words that rung truer to my experience. And this is what the collection does, it places us inside the imagined world of the writer’s muse. Though poems like “Breakdown” make it clear that this collection is about way more than idolising Styles for uncomplicated reasons:

the artwork of the strawberry-milk pink,
coke-bottle green records,

only to find it wasn’t a broken cable,
but a loose connection on the inside.

Indeed, “Exhibitionist”, the longest and strongest poem in the collection, begins with the bittersweet acknowledgment that all the world is a stage that runs on commodified dreams:

The inside guy is taking his time. This isn’t a museum of tripwires and pressure sensors. This is a seven-camera situation with the security guard calculating the cost of a tutu for his twin daughter’s birthday. Three nights’ work, only drinking instant coffee brought from home and steak bakes from the shop further away… / A twang of bass catches his attention.

Ashley’s play on perspective is especially effective in this poem. For most super-fans, the security guard is the enemy, or at very least a one-dimensional authority figure whose job is to keep you from (mauling) the object of your affection. But this passage humanises this looming figure as he becomes encased in pink tulle. More than that, there’s the acknowledgement that no one in the arena is there for free—most are there to simply care for the objects of their affection. As in many of the poems in this section, the poet here is showing us that our own experience is nearly always what we choose to focus on.

“Fanfic”, the collection’s third section, consists of mostly prose poems that explore Ashley’s imagined world crumbling from a distance. The distance, however, occasionally leaves the reader a bit disorientated. Here Ashley acts as a Loki busting open the boy-band multiverse, as the possibilities of creation and interpretation are endless for both the poet and her readers. “At the Electric Piano”, for example, plays with the long hours, addiction, and awkwardness—sexual and otherwise—that a band like One Direction could confront: “in a different universe the boys met at the bus stop/ avoiding eye contact with a pile of banana milk sick…”.

I also couldn’t help but interpret “The Boy Who” as further playing with the agency of the speaker:

first time I see the boy in the borrowed jesus t-shirt he’s hiding in the bathroom of a house party trying to forget that he kissed a girl just to impress his friends he knows that I am thinking, wow, what a cool t-shirt … the housemate gave him the jesus t-shirt because he had nothing and the housemate told him take it this will look best with your blue eyes

This poem could be asking: what it is about people that compel us? Do we, in the cosplay of writing fanfic, or just crushing on someone, acknowledge our god-like role in assigning agency to our chosen deities?

The final section, “Fan Mail”, is darker than the others. These poems explore interiority, of both the speaker and the subject, in shorter, sometimes sardonic bursts of insight. Poems such as “Ghost”:

He dances to layered vocals,
navigates to the cool guy criticism
in private conversations in parlour games…

show Ashley’s ability to slyly switch perspective in a way that leaves the reader wondering exactly how self-aware the subject of the poem is, while also creating a sense of pseudo voyeurism for the reader.

“Profile”, meanwhile, acknowledges the predictable passage of time, and the realisation that all stars eventually burn out:

In the end, it is impossible to forget the beauty of abandoned

The strongest sections in this collection are the first two, but ending the collection on less hypnotic, but more sombre material, works well. Love, attention, devotion, they all do fade, or at very least the initial excitement of them.

In her “Notes” at the end of the collection, Ashley states: “These poems are perhaps best read while listening to the work of Harry Styles.” Perhaps they are. But part of the fun of this collection is that readers may bring their own associations to the images and songs conjured. I knew one Styles song really well before reading this book: “Watermelon Sugar”. By now it’s hard for me to listen to it without thinking of the TikTok trend that incorporates the song, and then… random cat videos, and creators stealing dances, and then… I’m way off the actual song. Surprisingly, the Styles references in this collection aren’t obvious for non-devotees (not even a poem titled “Watermelon Sugar”!) though the nuances and callouts (which I googled using Ashley’s “Notes” and interviews) will surely delight the Harry Styles fans reading these poems. Additionally, there are further layers to the collection’s musical references, by way of lyrics and song titles from bands and artists such as Oasis, Fleetwood Mac, Elton John and Pink Floyd—songs that will likely serve as lightning rods of memory and emotion for most readers, even those born before the turn of the century.

Formally, there aren’t many risks taken in these poems, which could have been appropriate for chronicling frenetic energy, and the language is occasionally a bit too straight-forward, but Ashley’s self-awareness and vulnerability in her non-apologetic embrace of popular culture—and the skill to write about what’s popular—should remind readers of all ages of their hysterical youth. The most notable entry into the musical literature canon is Tracy K. Smith’s Life on Mars which is, of course, a tribute to David Bowie. While wildly fulfilling, Smith is very much writing from a mature perspective—an adult icon’s tribute to an icon. The joy of Ashley’s collection is that it manages to create a youthful universe around Styles that becomes so much more than just about Styles. As the world reopens and we start to publicly connect to music at concerts again, this book is a fun way to remember the touch, taste, smell, and ecstasy of the most intoxicating euphoria—fandom.

Kimberly Reyes is the award-winning author of the poetry collections Running to Stand Still (Omnidawn 2019) and Warning Coloration (dancing girl press 2018). Her nonfiction book of essays Life During Wartime (Fourteen Hills 2019) won the 2018 Michael Rubin Book Award. Published and anthologised in numerous international outlets, Kimberly writes about identity, ecology, and sexuality, and spends most of her time between Ireland, San Francisco and New York City.