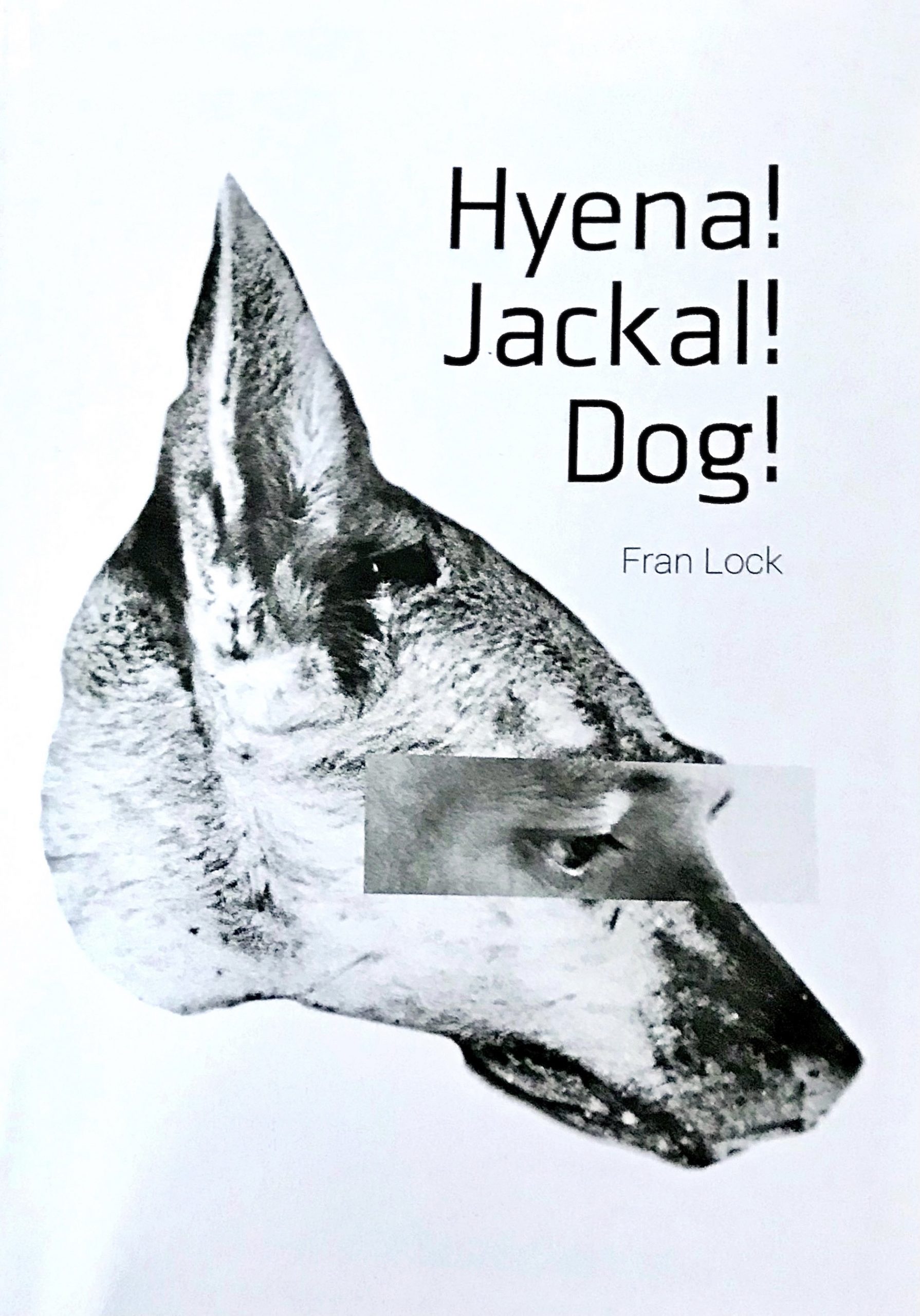 I am planning a rehearsed reading of the play Dracula, I read Hyena! Jackal! Dog! at the same time as the play.[1]

This kind of writing about Ireland, in Dracula, is [. . .] interstitial, falling between ‘distinct racial and even political logics’ (Joseph Valente quoted in Dubino, 2015).[2]

The same could be written of Fran Lock’s writing: interstitial, falling between distinctions. In Victorian times humans affected by rabies, ‘become more animal-like; in effect, they become hybrids’ (Dubino). Hyena! Jackal! Dog! is a multivocal hybrid affected by grief, longing, rage, abjection. There was a time I would have glossed a book’s introduction, misunderstanding the call for attention. The more my life became reoriented by feminism, the more I saw introductions as disclosures, as positioning. The introduction frames the collection as one of ‘queer mourning’, ‘making strange of the world’. At the National Women’s Studies Association Conference, in Storrs, Connecticut in 1981, Audre Lorde responded to a white woman’s question ‘Are you going to do anything with how we can deal directly with our anger?’ with the question ‘How do you use your rage?’ (Italics in original: Sister, Outsider, 1984). Fran Lock uses her rage to rant a manifesto of carnal desire. Howling, hysterical.

Hyenas have a language, or they have a kind of complex anti-language comprised of ‘giggles’, whoops, howls, and groans.
—‘Introduction’

Lock uses an epigraph from Valerie Solanas under the poem ‘Hyena Commitments’. (I have used the same epigraph for this review.) In doing so, she alludes to the importance of announcing, of positioning through manifesto. Hybrid collections that pour over the edges of poetry are having a moment with Hana Pera Aoake’s A Bathful of Kawakawa and Hot Water: Selected Writings also released this year, a book of longing, of anger provoked by grief. A grief that lives in every abject creature. Lock’s collection, alongside Pera Aoake’s, is openly anti-establishment: the establishment of poetry, of social hierarchies, of the patriarchy, of strict form.

The witch is having a revival. Trump played his part in associating woman and witch in the contemporary Twitter-fe(e)d mind. Feminist writers have been responding in their droves; in 2019, Lindy West’s The Witches are Coming and Witch by Rebecca Tamás became two popular examples among many.

Hyenas are misunderstood animals. I don’t suppose there is a woman alive who wouldn’t feel some sense of kinship with their abjection and vilification, but it must be felt most deeply by the women who are ‘other’ even in the otherness of being a woman, women who are told they are mad, or perverse, or profane, for the ways they desire and the ways they grieve, women who are made to feel like animals.
—‘Introduction’

Women are returning to the empowering elements of witchcraft, glorifying in the transgression of female power norms to drive movements such as MeToo and Time’s Up. Lock positions hyenas, jackals, and dogs as abject animals. The animals that most embody shame. To inhabit these animals in a chorus of voices is to embody shame. Wear it like a coat. Like a pelt. Like skin. A performance. Lock’s form mutates, often reminding me of Eileen Myles with short lines dissolving into each other. She incorporates definition, footnotes, narrative, and slashes, to write a multi-vocal poetics.

what if i
should – fantastic affection – spread infection’s
folly? intuitive contagion. you know what
women are. fury rising up, all sudden mouth,
excited fancy’s flood.
—‘Saverland v Newton, 1837’

Lock slips between the animal and human world, physically inhabiting the abject animals of the collection, mutating form on the page with shape-shifting language to become physically mobile. There is the feeling that the collection is written to be heard, performed, the oral as transcribed on the page rather than written for the page. I read echoes of Cody-Rose Clevidence’s Beast Feast (2014) where language and nature are deconstructed through form, most notably the slash. Ocean Vuong in his 2016 collection Night Sky with Exit Wounds slashes at his history to reconstruct the narrative for himself similar to Lock’s desire to reconstruct and inhabit abjection. When Lock writes, ‘i have written this poem before,’ I am again reminded of Eileen Myles, who often speaks of the personal as not just political but worth repeating. In Lock’s syntax and ‘aggravated fracture’, in the blush of shame, I read Eimear McBride.

my name
becomes a blush becomes a tunnel
to redundancy
—‘Iphigenia’

The footnotes provide layering, also distraction, two things happening at once, a kind of chaos that the reader either adapts to or doesn’t.

Lock layers language as well as form, image upon image, inviting the reader deeper and deeper in. I want these poems in my face, my eardrums. Here, as so often, the page fails me. The performance of Lock’s work is engrained in its insistence. There is rarely space. Rarely silence. The inside comes out. The palpable grief, the striving of this collection is intense. I’ve been called intense many times. A lot of queers are intense. Intense in the way of looking differently, of having a gaze outside of the ordinary. Poetry is infected with affect. ‘RED BIDDY’ sprawls a three-part narrative extravaganza into the definition and sociohistorical meaning of biddy.

if she could sew one foible phrase to her skin, it
would be hunger, or pivot, or sliabh.
—‘RED BIDDY’

‘Animal affinities,’ comes at the end of the collection, and runs over twelve pages. A crescendo of folklore, surveillance capitalism, discrimination, and werewolves. This hybrid poetic manifesto illuminates red right to the end, spewing language in rivers, the rapids engulfing those unequipped to join the tirade of longing, the endless grief of distance from the dead, from ancestors, from land, from clan.

The umbilical cord is regarded in the folklore of many
cultures as an anchor for the soul. It must never be thrown
away haphazardly. It should never be destroyed. What hap-
pens to the cord has a real, material bearing on the future
life of the child; it can bind them to a native place, it can
influence their destiny: bury the cord in a school yard for the
child to grow up a scholar, bury the cord in the grounds of a
church for the child to grow up devout. A cord may be kept
or worn, twisted into a charm for luck. It may be wrapped
and placed in water, if the child is to travel the world. When I
was born, my mother’s shaggy black dog ate a portion of my
cord. I have belonged to the dog ever since.
—‘Animal affinities’

Emer Lyons is a lesbian writer from West Cork living in New Zealand. She has a creative/critical PhD in lesbian poetry and shame from the University of Otago where she is the postdoctoral fellow in Irish Studies at the Centre for Irish and Scottish Studies. Emer was the featured poet in Issue 41 Volume Two – Winter 2019-20. Most recently, her writing can be found at The Pantograph Punch, Newsroom, Queer Love: An Anthology of Irish Fiction, Landfall, and upcoming in Meridians.