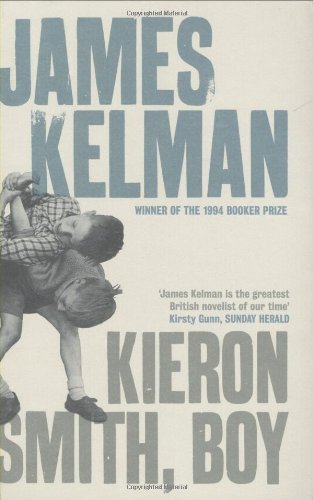 When James Kelman won the Booker Prize in 1994 with How Late It Was, How Late there was a less than polite rumpus in the media over whether a book containing so many swear words (some appalled critics were driven to count them) and written in a working-class Scottish voice could be considered a work of literature. Apart from the fact that Kelman should have won the Booker with the ground-shaking A Disaffection a few years earlier (and with the experimental Translated Accounts in 2001) the controversy around the book illustrates the deep class and cultural tensions behind British literary culture. Kelman himself is never slow to attack what he sees as the bourgeois (London-based) establishment and its suppression of working-class culture and speech. The author is patronised as an exotic leftover of early-eighties socialist radicalism or he is venerated as the finest craftsman of the modern European existentialist tradition.

Kieron Smyth is your quintessential Kelman character. Although he is only four years old at the beginning of the book, he is already thinking about injustice, about fairness, and right and wrong. When he sees a man being kicked on the ground, he worries about the ethics of ‘dirty’ fighting and then has the interesting thought:

What if it was yer da and ye saw it was him? He was fighting the man. So everybody was watching. Then you came and saw, oh it is a fight. And ye saw who it was, Oh and it was yer da. And the boys were looking at ye. They knew. Where ye going to fight them?

A little later, Kieron has a boulder dropped on his face by two older boys for something he didn’t do. His world is the 1940s tenement flat he shares with his parents and big brother, the climbing of walls and trees, fighting, the river ferry, day and night, the Taig enemy, stones, his school where the teachers call him a ‘chatterbox’ and ‘jist silly’ and his grandparents’ house where he finds some kind of refuge. But even his Granny thinks he makes too much noise. And something else bothers her as well—she pokes him with a stick because she does not like his Catholic -sounding name. As if that wasn’t enough, Kieron’s mother is always correcting the way he speaks: ‘If you are talking to people you are to say this and not that oh it is just a showing-up if you speak like that, it is not awww graaaanie it is oh granny, listen to your brother.’

Linguistic censorship is an important theme in this novel. Kelman has often argued that Standard English (and the educational system enforcing it) is a tool of the repression of working-class identity. Kieron’s mother is a snob who believes he will only get on in life by speaking ‘properly.’ In an effort to please her (and an ironic gesture from the author to his critics), young Kieron goes as far as to censor himself when using swear words. This means the pages of the novel are haunted by words that only half exist, words like b****r, c**t, and f**k, b****y and w****d and w****g and even d**n and c**k, s*x.

Internalisation of this self-marginalising voice, passed on from generation to generation, is what Kelman has fought against in all his work. His style has grown into an intricately hewn synthesis of word, thought and speech. Inside the subtle everyday rules of what you can’t say and think, Kelman explores the possibility of freedom for a consciousness made up of words. In this way, he follows on from the traumatised logorrhoea of Beckett and Kafka, and in some ways from William Burroughs who thought of language as a virus with us as unwitting hosts.

Kelman drags the everyday world of his characters into the foreground at the expense of the airbrushed psychology and artificial melodramas of the bourgeois novel. The central events in Kieron Smith’s life are the family’s move away from the tenements to a new housing development on the edge of the city, a change of school, and the death of his grandfather. Kieron’s development over the years from four to twelve is subtly and honestly managed: the boy grows day by day in the shadow of disappointment and loneliness and every now and again fights back with small acts of retaliation, most significantly when he finally bursts out in class with the full-bodied ‘Fuck’ word. After that, the ghostly asterisks don’t come back. Is this a loss of innocence or the beginnings of a radical disaffection? Looking at himself in the bathroom mirror, Kieron wonders:

What was me? What I was? If I was something. What if I looked like something. What did I look like? If it was me, what did ye see?… I looked in the mirror to see mine and I just saw everything there and just everything and it was just the strangest thing and my face could be Doctor Jeckyll and yer eyes of whose eyes are they, evilly glinting…

Kieron’s imagination is sensitive to the supernatural world of ghosts and vampyrs and evil. If he is out at night, he is always on the look out for the ‘waking dead’ and things that might snatch him away. As the novel proceeds, these spells of dreadful spookiness seems to increase in frequency and depth. In fact, the book might be said to have a quietly beating Gothic heart, a buried secret perhaps, which is linked to the question hanging over the origin of Kieron’s name. In an early scene, the boy asks his beloved Granda how he ended up with this odd Fenian-sounding name but he doesn’t get an answer and then ‘my grannie just looked at me. That was what she done, and she breathed so deep ye knew ye were not say it.’

The question is never answered but as happens in the Gothic imagination, the anxiety and dread won’t be buried. Is he what they tell him he is or is some part of him a mystery? By the end of the book, Kieron is worrying a great deal about good and evil. The last pages are a terrified monologue about spirits and séances and ‘ghastly presences’ and the Mother of God and even aliens. Kieron’s only comfort is the possibility of good deeds, like maybe climbing the drain pipe to help a woman locked out of her flat for ‘maybe she had a pot boiling or a frying pan burning.’ But what if on the way up he were to slip and fall and ‘if it was a bad spirit made me do it’? And what if then the ghost of his Granda flew up and saved him and set him down softly on the ground ‘one foot at a time’?

What if? (Critics should count the number of times ‘if’ appears in this novel.) The question takes us to the heart of Kieron Smyth. Against the hierarchies of power and fakery and inherited self-censorship, he can continue to grow and struggle for his identity with the help of his imaginative ability to ask questions. And hopefully, with a bit of luck, maybe he’ll be okay.

Kieron Smith, Boy is one more in a line of uncompromising, honest, passionate, radical and perfectly crafted books from a writer who has not given up on the questions of freedom and justice.

Tale of the Boy & the Horse Head

In Praise of What We’ve Lost