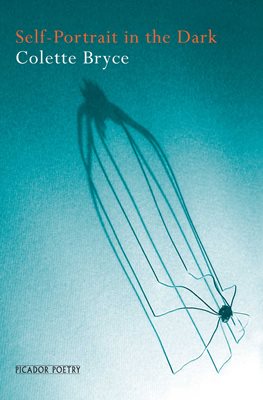 Self-Portrait in the Dark

Two mammoth poems ststand at the threshold of this collection, calling us in. ‘Self-Portrait in the Dark (with cigarette)’ and ‘Self-Portrait in a Broken Wing Mirror’ instruct us to roll up, come see the wonders of Colette Bryce. They don’t disappoint. In ‘Self-Portrait in the Dark (with cigarette)’ we find a beautifully-defined Bryce operating within a well-defined darkness. And we’re charmed, entranced by the rebellious, courageous character who admits to driving her ex-lover’s car illegally ‘at night in the lamp-lit silence of this city’. The poem moves rapidly through passion, loneliness and night, displaying Bryce’s ability to turn words on a sixpence by using the red wink of the car’s security system to spin from self-deprecating humour, to profundity, and back round to tie the poem’s opening with its end:

it could represent a heartbeat or a pulse.
Or loneliness: its vigilance.
Or simply the lighthouse-regular spark
of someone, somewhere, smoking in the dark.

The same dauntless character emerges again in ‘Self-Portrait in a Broken Wing Mirror’.

But no, that’s me, a cubist depiction, my ear
its swirl and ridge of pearly cartilage,
peachy lobe and indent of piercing
not jewelled for years. I punctured that
with a nerve of steel at fifteen in a bolted
room. It was Hallowe’en. I had no fear.

By the time we’ve read ‘Car Wash’, where we share an illicit, frothing kiss behind ‘spinning blue brushes of implausible dimensions’—freed momentarily from lingering echoes of ‘ever-absent fathers’—we’ve been entirely seduced by Bryce’s rebellious, untamed essence. We’re sucked in, certain that the self-portrait we are being offered will be a quirky, ebullient read. So we’re happy to travel with Bryce as she begins in poems like ‘The Residents’, ‘One Night in the Glasgow Central Hotel’ and ‘The Hunted’ to take an interest in hauntings. The trouble is at a certain point Bryce steps from an interest in ghost characters, to becoming a pale, hovering presence herself. In ‘Ghost Words’ the narrator tells us:

I pull up a pew, pretend
to be with your life’s blood
but it’s no good.

I fold myself into the wall
and am gone. The scrape of my chair
on the floor echoes on.

Whoever it is that has gone has taken the living Bryce with them and Self-Portrait in the Dark shifts to reveal its true nature. While Bryce makes the move easily from presence to absence, the reader fumbles and gets lost. Where has our fearless companion gone, was she mere illusion? Both the bright spirit and the well-defined darkness disappear into a gloom of poems whose feeling is well captured in titles such as: ‘The Harm’, ‘The Hunted’, ‘Ghost words’, ‘Where Are You?’, ‘On Not Finding the Angelry’ and ‘Sin Musica’.

We begin to mourn the car wash’s blue brushes and the security light’s red wink as bold colour wanes to ‘Seventies yellow’, ‘brown coins’, ‘greyish nets’, a child’s mouth that is a ‘black hole into which the earth itself might fall’. Ocean and sky become a ‘blue confusion’ and though the sky in ‘The Hopes’ is ‘unusually blue and clear’, we have for the most part entered a landscape of ‘familiar airlessness’, ‘lead’, ‘smoke’, ‘dust’ and ‘cobwebs’, where inanimate objects ‘cool in pangs’ or ‘put on a brave face’. We are in ‘the Interim Bar’ with ‘the no longer hopeful’, walking ‘endless corridors’ in search of human company, in a world where phone conversations break up and Bryce is distanced from those closest to her.

There’s something in the neat construction of the poems and in their sparse language, which even distances us from their ache. Bryce belongs to the school of poets who like to render situations of pain and misery documentary-style, only to stand back in the last line with a sort of hand-washing shrug. ‘On Not Finding the Angelry’ ends with ‘We close our scopes and start for home.’ In ‘Twelve’, where observers appear to—tourist-style—visit the scene of a child’s murder, she closes, ‘Silently, we looked at it.’ Such dispassionate unwillingness to express opinion leaves us empty-handed, while her shyness at displaying direct emotion makes it hard for the reader to remain engaged.

Still we follow the crumbs of self that Bryce leaves down, hoping she’ll get back to the fleshy character we first met, disappointed to keep meeting, ‘a cornery mind/turned in on itself’ rearranging ‘this useless clutter/of words, words;//words that cover more than they reveal’. Though the drama shifts location, it all seems to take place in the ‘masked gloom of a living-room’ where vertical blinds are both ‘bars of a cage’ and ‘taut strips of bandage’ standing sentry to admit or refuse light.

It isn’t so much that we’re lost in the dark; it’s more that with so much emphasis given to dispassionate mournfulness we’re left with a portrait of the pale. There are no poems showing Bryce’s sources of joy, none that illuminate her bonds to life; paleness has been turned up so high that vivid Bryce and vivid life have both been whited into extinction. The collection looms white and ghostly like a Louis le Brocquy portrait.

Yet these poems, though frustrating in their seeming insubstantiality, are a brave cartography of the ground zero that occurs when the Gods of Youth have been taken down and the Gods of Age have not yet been erected in their place. Deeper reading articulates the pressure Bryce is under, and there’s a sense that its intensity is squeezing her powers. Elliptically she paints a world where ‘Awareness /can be a dreadful thing’, where the struggle to remain financially afloat and still writing has her working in a ‘bunker, funk-hole’ with mould ‘blossoming on the wall’, trying to ‘negotiate the muse’ in an industry where women poets still operate behind a ‘wall that is there but not there’. Shyly she paints a life severed from Northern Irish roots which go down deep into the troubled 1970s, when talk was always ‘about the land, our spoiled inheritance’. It’s a life where kissing your female lover can still ‘stop the traffic’ and the only source of nurture is ‘next year’s luck’ but Bryce’s highly concentrated forms, knitted from fashionably cool-blooded lyrics, deny the story enough space to breathe. It is where she defies everyone and everything, irrespective of our opinions, that she is dynamic and engaging, producing poems we will carry with us to the end.

Grace Wells was our Featured Poet in Issue 10 Volume Two, Summer 2008. Her debut collection, When God Has Been Called Away to Greater Things (Dedalus Press, 2010), won the Rupert and Eithne Strong Award and was shortlisted for the London Festival Fringe New Poetry Award.

The Meaning of the Rabbit