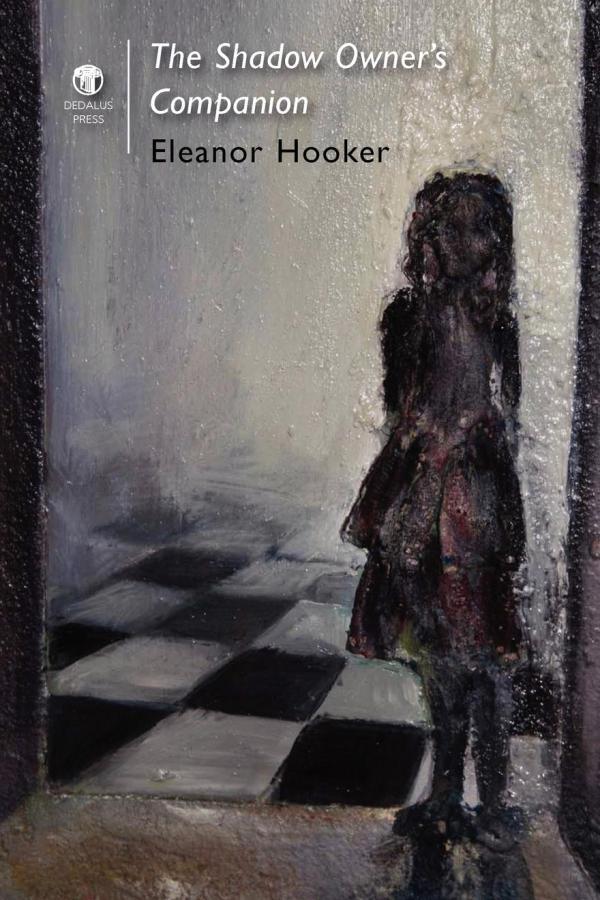 The Shadow Owner’s Companion / Before You

Eleanor Hooker’s debut collection, The Shadow Owner’s Companion, is haunted by childhood memories, and by the fears unleashed by imagination itself. Its poems grapple with the intensity of this material and with its revelatory potential. In this way concerns surrounding the complex relationship between experience and art emerge in this volume, though the hectic mood of some of its poems runs counter to the stillness necessary for creative reflection.

Many of the poems feature dream or nightmare worlds where physical description gives way to dark emotional states: ‘The pike sent her to/the shark. The essay/ scored in pupils’ blood/to be read aloud to//fifth and sixth and seventh’ (‘Chrysalis’) or ‘My right ear pressed to the track, feeling for trains,/it began to rain frogs […] Frogs are not globs of green ugliness: jealousy is and spite too, mean-toothed/talk is…’ (‘Birthday Greetings’). Surreal moments such as these, and the painful memories they give rise to, threaten the tonal coherence of the writing and can disrupt deeper engagement with its difficult material. In some of the poems, such as ‘Breathing Lessons’ and ‘Someone Tell Me’, impulses are stabilised formally by the use of refrain and repetition. Yet these also increase the sense of menace that pervades the collection, expressed metaphorically by the repeated image of the pike that swims or pauses soundlessly here. Though these are certainly atmospheric and arresting works, Hooker is a much stronger poet in the fine ‘Song of the Sea’, where she uses her formal skill to access that other world in more layered and subtle ways:

At Kilmore town, ancient carols are sung;
Legends say the sea will drown their town.
Casting stones into the sea is wrong.
Storm-crested waves drag silent sail down.

By choosing a poetic structure of repeating lines here (a re-working of the villanelle), she creates an interesting detachment of line from line that adds to the fated atmosphere of the poem. This is also where the two most important thematic strands of the collection meet: the other world of supernatural events, and the life of the sea. This convergence happens fruitfully again in ‘Lough Derg’, where the mythological representation of the elements is confronted in sensory terms. Elsewhere in Hooker’s work underwater imagery creates a nightmare world, but her writing becomes more supple and disciplined when the sea is depicted naturalistically. This is especially true of the poems here that draw their material from the world of sailing. In distilling this energy into the poems, she gives us the erratic rush of ‘54’, which abandons smooth rhythms for persistent tensions between phrase and line:

Rain clouds unfurl, fumble on the Clare shore, low set
to the water. Checking the line our crew calls ‘Squall’,
counting down as breathy patches darken on the surface

Here the sheer vigour of realistic description draws the reader into the mood and sensory experience of the poem in memorable ways. Elsewhere, in ‘Recovery’, the speaker recounts the discovery of a drowned sailor with powerful syntactical control:

Drowned.
Alone and still. We stop and bow our heads,
All silent now, even the wind has stilled its
Ragged wail.

It is in the return to the real as the basis of poetic creation that Hooker demonstrates the attentiveness to sensory detail, and to states of emotional containment, that reveal her potential most fully.

Leeanne Quinn’s first collection, Before You, also depicts changing environments—ones often linked to reflections on personal loss. These are intimate and finely-tuned lyrics, observant of subjective states and patterns of shared experience. The repeated use of weather testifies to the unstable and unpredictable world of this volume, where subtle changes in mood become suggestive of the psychological pressures exerted on us individually. Thus the weather in these poems is at times internalised, and at other times invoked to raise ecological concerns—‘Forebodings’ is a strong example of how the imaginative and the real can be linked:

The seagulls are in from the shore again,
airborne scavengers, sounding their foreboding—
over grey, capital skies they float, wise enough.

[…] On the screen,
Glastonbury is another washout
of wellingtons and ale, while a heat wave burns
through southern Europe.

The apparently simple strategy of combining unspecific portents of disaster (Hitchcock’s The Birds comes to mind) with bad weather news stories from around the world, yields a poem that reflects these different levels ofapprehension in its own linguistic structure—the shifting scenes, the tuning out of sounds. Quinn’s work is at its best in this conjunction between the singular concept and the subtle formal alterations that give it complex life. ‘A House in the Ocean’ depicts a floating house taken off by the flood, and speculates as to the fate of its inhabitants—will the sea bear them home, ‘Or do they already lie adrift/on pummeled land, inconsolable//as this rootless house,/still looking like it could keep/the outside out’.

This concern with the boundary between inside and outside occurs repeatedly, and expresses the difficult relationship between the singular being and larger forces. It is powerfully evoked in the final image from ‘Cockle Picker (Morecambe Bay)’, a poem based on a reported tragedy and addressed to one of the drowning immigrants:

You fell in with the tide, became scattered
in your salt-stricken panic…
bursting, gave yourself up, naked, poorer—
your body brimming, full as the sea.

Interesting tensions between the dynamic and the static emerge through the representation of the elements: water is often a startling or overwhelming force while earth suggests a suffocating stillness that is at once oppressive and strangely comforting. The inexpressive couple in ‘Peculiar Alphabets’ lie ‘safe and earthed, wrapped//in our soil-skins, waiting for the dig to begin’. The texture of the prose poem ‘Rubble’ demonstrates the tactile nature of Quinn’s language and suggests how syntax can only gradually build meaning in these constrained circumstances:

Take this house from my body, brick from my bones. There’s my foot under yours. Take it. It will make you rich. […] See how I fit inside, how my spine curves to these dirty threads. Oh you can hardly make me out. Oh make me out…

Quinn’s sensitivity to the relationship between form and meaning is highlighted in Before You not so much by her choice of fixed forms but by her loosening of poetic structure. ‘Storms’, a sequence of prose poems inspired by the letters of Elizabeth Bishop, shows the freedom required by this ‘translation’ of language (and genre) from one poet to another. Though the rest of the collection is comprised almost entirely of free verse lyrics, some poems indicate a more deliberate formation. The short poem ‘Chorus’ expresses the power of the auditory in visual terms:

of frozen sea, or
the plates of continents

moving, a dangerous time to be
near you, and all ears.

For a poem that begins with the word ‘consonants’ it is extraordinarily dominated by its vowel sounds, all slow and broad until the sprightly ‘near – ears’ of its final line. It is an unobtrusive poem, yet it signifies the productive tensions of the volume as a whole: tensions between sound and sight, wholeness and loss, the familiar and the strange. It marks a debut of considerable depth and maturity.

Lucy Collins is a lecturer in English at University College Dublin. Her anthology, Poetry by Women in Ireland 1870-1970, is due out from Liverpool University press in 2012.