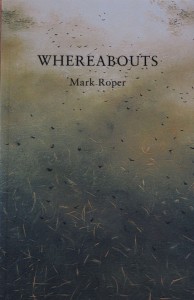 Upon reading the randomly chosen ‘Harriers’ and ‘Heron’ amongst other poems with ‘nature’/rural imagery I took an immediate dislike to Mark Roper’s Whereabouts. The above-mentioned pieces are masterful evocations and sketchings of the artist’s chosen subjects; be under no illusions otherwise. My problem was that the evocations are so vivid that I was unwillingly transported to my lonely and boring childhood in an Irish countryside dominated by narrow-minded teachers, schoolyard bullies and (surely the very worst rural phenomenon) the demagogues of the G.A.A.

Roper’s hen that ‘sickened, hunched up, as if / trying to climb back inside herself’ (Peck) or the heron that intermittently emits ‘its terrible cry: a note, long pondered, // exactly the same as all preceding, all / to come’ (Heron) are somewhat too close to the bone to be enjoyable to me personally. But ‘our own misfortunes,’ says Kavanagh, ‘are mostly unimportant’ and it is precisely Mark Roper’s skill as a poet which is at the root of my revulsion.

Doubtless, Roper shines best on two counts—stylistically in his magnificently crafted attention to particulars and thematically in addressing what those with deficiencies of vocabulary or imagination usually refer to as ‘the human condition’. Detail abounds in Whereabouts. What, from the pen of a lesser craftsman could easily have been a more bland and general description of ‘toys’ or ‘dolls’ in Roper’s hands becomes by his insertion of proper names—‘the Bonzoes and the Bunties / the Jimjams, the Jenjens’—a far more powerful reflection on his chosen theme in ‘The Toy Museum’. Likewise, his unwillingness to lose faith in Ballyrush and Gortin sees Roper remember to great effect the ‘stony light, horses in Kearns’s field’ (Saturday Morning) or ‘Butterfly orchids / fifteen this year / in Tom Quinn’s field’ (Whereabouts).

Roper’s overriding theme in this volume appeared to me to be the ‘unknowability’ (in any genuine sense of knowledge) of the physical world, of other people and of his own nature. Thankfully though, he generally intones his poetic song closer to a Whitmanesque joyful engagement with this reality than he does to the existentialist bunkum to which some readings of his poems admittedly took me perilously close. In ‘Home’, strangely (suspiciously?) reminiscent of Larkin’s ‘Home is so sad’, he voyeuristically observes such mundanities as:

‘…books on their shelves,

Spoons in drawers, everything in its right place—
…
They forget you as soon as you leave.’

What was so shortly before quite intimate is suddenly something the poet cannot connect with in a meaningful way.

What intrigued me most was Roper’s depiction of interpersonal relationships; of which ‘Career’ is the most enchanting. A child’s daydream of life as an astronaut—its conception, its acting out, its ending—functions doubly well in this poet’s hands as the simple childhood fantasy falls away and Roper’s readers realise that they’ve actually been watching the childhood of J. Alfred Prufrock (well, almost):

From such a career
How should he return,
to be known again,
to be the boy
his family think he is;

Flicking through Mark Roper’s Whereabouts in a bookshop on a sunny summer’s day—or a rainy winter’s one for that matter—I cannot honestly say that I would have bought it. However, having invested a chunk of time rather than money in this book I have found that Roper managed to defeat my initial aversions and at least partially win me over with his ‘detailed, unknowable history’ (Leaf). A reluctant, though hard-won thumbs up.

Conor Farnan is a budding poet, recently deflowered by The Dubliner magazine (September 2005). In cases of national emergency he can be contacted at conorfarnan@yahoo.com.

Back When We Talked to the Dead

The Elephant as a Public Symbol