I could go to Berlin
or Penn Station in the 1 930s
and walk beside the big engines,
strolling track side minutes before
departure to Munchen or Milwaukee,

just for the deliverance to power,
the sense of the near future,
motion in the metal,
rain in the one
big head lamp’s beam,
the sudden, certain lurch.

Smog-filled mornings walking
the C&O tracks to school in West Virginia,
I longed for the 7:19 to coast up,
spectre-like, and shovel my teenage despair
into a morning of steamy openness
and possibility. But only the sun
loomed on the tracks ahead.

Now I step outdoors on clear nights;
stars glisten like steam droplets
on the tall engine of the passing days.

Ron Houchin is a retired public school teacher who lives on the banks of the Ohio River. He has three books published by Salmon poetry: Death and The River (1997), Moveable Darkness (2002), and Museum Crows (2009). His other books, Among Wordless Things (2004) and Birds in the Tops of Winter Trees (2008), were published by Wind publications. His awards include Appalachian-Book-of-the-Year-in-Poetry, a National Society of Arts and Letters Prize, an Ohio Arts Council Fellowship, a poetry prize from Indiana University, and a Writers’ Digest Award. 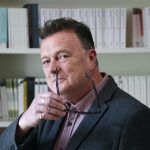 Introducing our first Translator in Residence