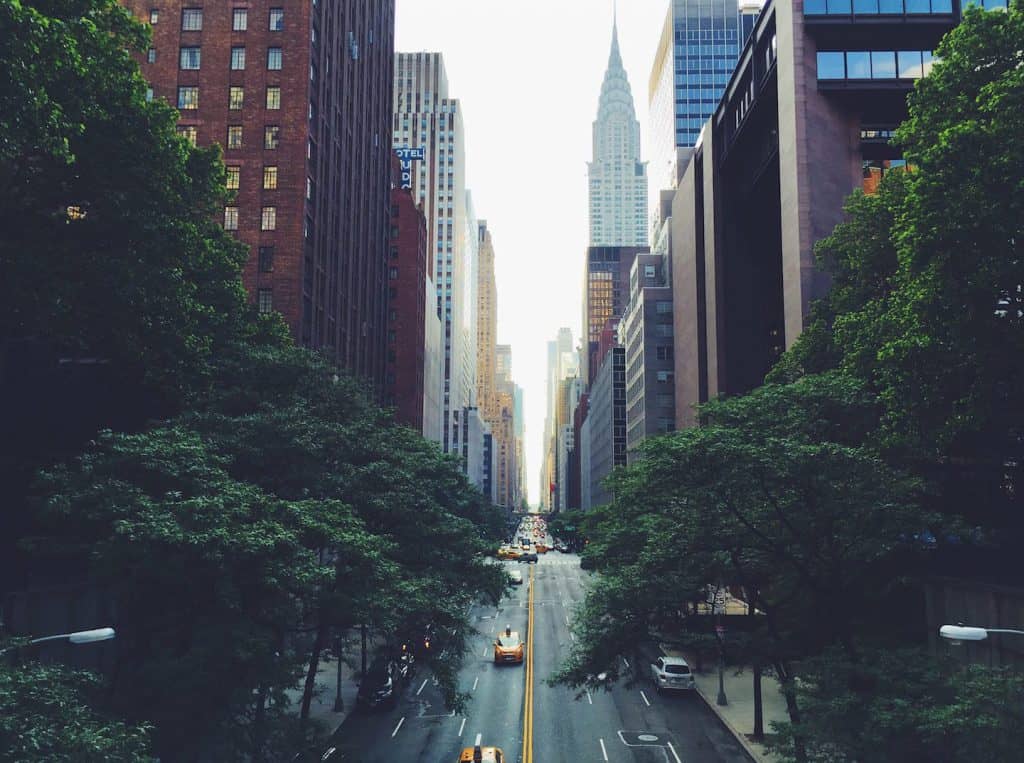 Yesterday the guy next to me couldn’t settle. He left his desk repeatedly, called the elevator, disappeared for an hour, returned, adjusted the air-con, made coffee, sighed. There is nothing to be done. We all have days like this.

I went out to Starbucks with another writer. Two years ago she left her job in the corporate world to write a novel. She’s in the Gotham Writers’ Group. She lives on 106th Street and walks all the way down to 47th each morning, passing through Central Park, down 5th Avenue, crossing at lights, in the thick of the crowds and the traffic. She thinks about her novel as she walks. By the time she gets to the Centre, she’s with her characters, ready to be immersed. She breaks for lunch at 2. She works till 6.

When I left the Centre yesterday I took my 20-year-old niece, who’s here for the summer, to the Guggenheim and then she took me to a vintage shop in the Village whose Turkish owner finds her Irish charm so appealing that he knocked $30 off a ring for her last week.

‘Tell me about this writers’ place,’ she said to me over a beer on Carmine St. ‘What did you do today?’

I looked at her. ‘Well,’ I said, ‘I got there about 10.30, the first to arrive. The place was boiling. I went over to turn on the air-conditioning. The switch is on the wall right next to the desk holding the printer and a notice-board. I needed to go up on my tippy toes to read the settings and I put my right hand out on the desk to steady myself, just for balance, you know…’

And then something happened. The world shifted and swayed. I tilted to the right and things came crashing in a great commotion around me. At my touch the desk folded and collapsed. It fell, all to the right, and then paused and emitted a tiny hingey groan, and I think a sigh, and then, near the ground, it halted. My heart froze. I thought there’d been an earthquake on 47th Street.

I picked myself up. The printer and notice-board clung on at a dangerous angle. The desk chair had spun itself across the room. I thought I heard sirens. The NYPD were coming to get me. I had to own up, plead my innocence before they got here. I looked down the length of the room, then up at the ceiling. Where was I anyway? I ran to the elevator, rode down to the front desk, jabbered to the poor receptionist about collapsing desks, falling buildings, earthquakes. She smiled reassuringly and continued typing.

The printer was fine. I tidied up the desk parts. The screws had been slack, the woodchip worn. I mailed Kristin and explained, full of apology for being here only five minutes and already taking down the building. She mailed me back saying the desk was on its last legs, and anyway what can you expect from Ikea? Everyone was so understanding.

All day long I moved with caution. I stepped into the elevator and when the door closed and it shuddered and jolted I thought now, now as soon as I hit the button it will fly down the shaft into a black hole. In the restroom I drew back for a second, certain the tap would come away in my hand and water would gush out in torrents and flood the place.

This morning I worked at home. The apartment cats, Geoffrey and Fiona, slept soundly at each elbow, bookending my thoughts.

Eli Zabar owns a little cluster of upmarket eateries, stores and delis on the Upper East Side. One of these, The Vinegar Factory, is across the street from my apartment. It opens at 7am and stocks The NY Sunday Times.

The New York Times writing is fluid, intelligent, full of clarity and precision. Most of the commentaries, features and book reviews are written in an interpretative style that is personal and insightful. The writing sparkles, making the reader feel imaginatively and intellectually alive. I look out the window and sense the presence of exceptionally clever people on the streets, and privately hope that—as if by osmosis—something will rub off and enhance my own ability.

A review of one book, entitled The Beginning of Infinity by David Deutsch, which ‘offers views on everything from subatomic particles to the shaping of the universe itself’ almost proves this. Deutsch is, unquestionably, a genius, but it is the reviewer David Albert, himself a professor of philosophy at Columbia, who succeeds in translating and analysing and delivering these complex thrilling theories to the reader in a way that both renders them accessible and imbues the reader—this one anyway—with the feeling of command and understanding of a subject normally beyond one’s ken.

On the corner of 47th and Madison

I ran into a man with the head of Obama today. I went down to buy water, and was turning off 47th Street onto Madison when we almost collided. His skin was lighter and he was a little shorter but he had the same perfectly sculpted intelligent head and long, lithe beautiful limbs of Obama. It was the head, that small, regal African head, like those displayed in museum exhibits and archaeology books and brings to mind the word refined, that I was taken with.

I know where it came from—I know the trajectory of that honed head as it came towards me. I had been trying all morning to find the co-ordinates of a character’s face, to map her cheekbones and dark Levantine eyes. I had dropped into one of the deep reaches of the rabbit hole, where the room and the city dissolved and words and random images brimmed up, and that rare brimming was with me again and she was with me still when I walked out and ran into the president’s head on the corner of 47th and Madison.

Last November The Old Town Bar on East 18th St threw a 100th birthday party for its urinals. There was a champagne toast, and a congratulatory letter from Mayor Bloomberg… Presumably everyone sang ‘Happy Birthday’ too.

On Friday evening, on the 86 cross-town bus, the man sitting next to me held in his hand the latest issue of the New Yorker—just out that day. As I stood to let him out he said ‘Have a nice night,’ and I, surprised and unaccustomed to such civility on public transport, replied, ‘Thanks, I will,’ and then added ‘Enjoy the New Yorker.’ At which point he paused and turned and held out the magazine. ‘Would you like to have it?’ he asked. ‘I’m done.’

I was at the apartment of a friend of a friend the other night. The friend of a friend has a brother, recently divorced, to whom she is close. He’s a successful businessman, much travelled, a sensitive man who misses his family and domestic life. He’s eager to settle down again but has not had much luck with the women he dates. He fell hard for a woman with two small kids and an addiction to tranquillizers. Recently he met a woman of forty from Iowa—beautiful, successful, who owns her own home and has no baggage.

‘This one sounds good,’ I said.

Calling out the cable guy after Geoffrey the cat parked himself on the remote and scrambled the signal.

The incredible politeness and civility of New Yorkers.

The literary quotes in sepia inside the elevator at the Centre for Fiction.

7am opening hours at The Vinegar Factory.

Thoughts burning bright on the 8th floor of a building on 47th Street.

Three cats on a leash on the esplanade by the East River.

Knowing that other writers are at least as neurotic as I am.

The bargain books on the sidewalk outside the Strand bookshop.

The surplus supply of well-being at the sight of large bunches of fragrant roses for $10 each on a street corner on 2nd Ave.

The surplus supply of well-being.

Fiona the cat, airborne, shooting past my head when I come in, and then skidding to a halt, a la Jim Carrey, on the wooden worktop in the kitchen.

The Klimt torte and The Duino Elegies in the basement cafe of the Neue Galleria on 86th Street.

Answering ‘I’m a writer’ to a question at dinner in a 29th floor apartment on 3rd Avenue.

Adieu to all that

I drop by Admin on the third floor and hand the key back to Kristin. I am incredibly grateful for these past weeks at the Centre for Fiction.

I’ve cooked up a whole set of tactics to remain here. My fantasies run riot: the plane on the tarmac at JFK tomorrow, and me inside, all belted up, like Charles Grodin in Midnight Run, feigning a flying phobia, before two beefy Homeland Security air marshalls escort me off the aircraft and accompany me to a secure ‘facility’ upstate.

When I wake on Sunday morning will the Kimmage light enfold me or will I blink at the strangeness of the room, at some vague indefinable absence? Will there be a brief upflow of images—the stretch of Madison where the sun dazzles in early morning, the rooftop view of the astro-pitch across the street and the East river in the distance? I might close my eyes for a second to recover again that tightly packed urban grid, those large emotional spaces to which I was, temporarily, given access.