Prehistoric raves, the Irish Spoken Word scene, and why it’s best to have no plans. 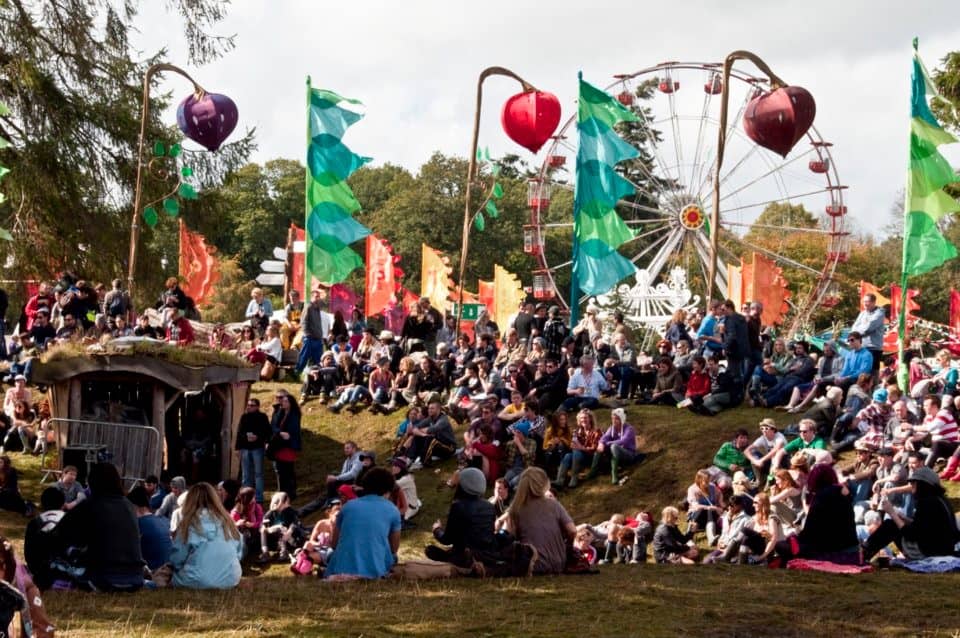 Tens of thousands of years ago tribes from all over South-Western Europe gathered annually in the area now known as Lascaux to engage in music, dancing, singing, drumming, whistling, howling, screeching and sex-magic – that is, in all the then conceivable kinds of artistic and bodily collectivism and individual expression. The cave paintings were perhaps only the jaded afterthoughts of these prolonged collective derangements during which Living Transcendence was the unashamed goal of all. Everyone’s intention was to break through the quotidian and the visible and on into to a realm of hallucination, enchantment, vision.

These Pre-historic mass-raves were the original festivals. Every festival since has been their more or less cracked, more or less warped reflection.

The free festival movement of the 1960s, which inspired Woodstock and The Isle of Wight, re-popularised the experience of letting go and losing your head while all about you are losing theirs and loving every second of it.

Later on, in the mid 1980s, great convoys of urban refugees known as Crusties or New Age Travellers – communities of resistance born out of Tory-inflicted social disintegration – took to the road. These convoys were mobile autonomous zones within which the free party movement came again into the reformed body of the rave.

That’s the short history of how, at the age of 15, I came to be, for the very first time, stocious-dancing in a smoke-filled tent in a field.

It was in the Fairfield of Clonakilty, right across the road from my terraced house, on the last Saturday night of August 1990. The night before, thousands of Thatcher-fleeing crusties, arriving in old buses, ambulances, pick-ups- you name it- sound-system in tow, had set up camp, under cover of dark, in that field which was usually home to nothing but grass, ants, nettles, daisies, knackered jennets and indeterminate animal bones left over from the annual shitehawk of a circus. I had awoken to the incredible sight of a fully-formed carnival, as Jeremiah might have awoken to paradise after forty days in the desert, except that this was really happening to me.

I’ve experienced nothing so unexpected and wondrous since.

Of course, I said bye bye mom, so long papa and went down to the whirling, stomping field to check it all out. There was techno. There were many people in states of extreme ecstasy dancing and whooping. There were men with ankle-length dreadlocks and shin-length beards. There were women in woolly rainbows passing things around. There was the closest thing to freedom I had ever seen. I headed for the rave and I never returned.

In these present passing days of Great Restraint, The Lasts of The Crusties are to be seen at the likes of Glastonbury and the Electric Picnic putting up and taking down tents, their by now traditional seasonal trade. And, of course, the Electric Picnic isn’t free. It’s a major commercial enterprise that I wouldn’t be able to afford to go to if I actually had to shell out for it. It isn’t even a remote possibility in the budget of a lot of people I know. This in-built classism robs EP of a lot of its lustre, for me.

But the people who do scrape it to buy tickets go there in the main, I believe, looking for and often getting the same thing the cavepersons invented and the crusties brought to Clonakilty – transcendence, a special period of exalted leave from rigid routine and responsibility, a temporary immersion in an alternative and better reality.

Gentle young suburbanites, pretty and sincere, the type of baggage-free people who can get all loved-up without popping any love pills, will head for the multiple health-giving distractions in the Body and Soul area. Those who like all things dangerous and thrilling will be found popeyed and glue-eyed to the gorgeous drag artistes and to the knife play of the leggy Burlesques in the spectacular This Is Pop Baby tent. The advanced decadents will be teeth-grinding the night away at the secret Trance Dance in the woods.

I’ll spend most of the time in the Spoken Word area, because that’s where my mates and peers will be. There’s a good deal of mutual support on the Spoken Word scene. Hanging around to see each other’s shows, even when already over familiar, is part of that. The Spoken Word scene works like the written word scene speeded up – by everybody learning from and reacting to everybody else, so it’s advisable as an aspect of artistic development, if you happen to be a poet or performer, to take in as many peer shows as you can.

A lot of demented electric wanderers, who know not where they be, tend to stumble upon the Spoken Word area while looking for something else, for example their minds. Poetry might be truly purgatorial to some of them, something like being attacked by wasps disguised as question marks and inverted exclamations. Others who already know us go spoking with intent, aiming to be amazeballed by the power of the voice, to applaud the courageous displays of free expression, to inhale the cheap-lagery air of inspiration.

What’s attractive about contemporary Irish Spoken Word is that, in my experience, it’s much less strait-jacketed by a dominant formula than its American and, to a certain extent, English cousins. Individuality, eccentricity and difference are supremely important artistic attributes on this island. Which is great for audiences, because different voices suit different ears, I find. Some will hook straight up to our natural orators and populists, others will admire what we can show off of the niche, the avant-garde, the rarefied.

Leanne O Sullivan isn’t thought of as a spoken word artist, but her readings always wow people all the same. The cannonballs of the scene – the likes of Colm Keegan, Raven, Karl Parkinson, and Stephen James Smith – will blow many listeners away. Boris Belony of Kilcoole, a surrealist provocateur and the literary equivalent of a triple hotknife, will plant worms of paranoia in your brain even as he turns you inside out with laughter.

As everyone who has been to the Electric Picnic knows, the event is too vast and too confusing to hold to anyone’s plans. So I won’t tell you at what time or in what tent any of these favourites of mine are performing. Check it out and chalk it down if you need to. But believe me when I tell you that if what you’re looking for is a breakthrough experience, and there is no fucking point whatsoever in looking for anything else on this earth, it’s best to have no plans. It’s best to be random. True carnival is like God, it laughs at everybody’s plans.

Nearly every performer in the Spoken Word area is on stage because they are good at and committed to their art – the one that they alone are developing – the one that out of all of the contemporary arts is least supported or burdened by institutional interest or interference. You’re probably going to get something challenging, stimulating, and original no matter when or where or in what state you show up within Mindfield.

So stumbleupon, or come to seehear us when you have nowhere else left to explore, or come when you can’t stop yourself from coming any longer. We’ll be there in Mindfield all weekend, mouths open, lips in constant motion, spiritvoices flying all about.

The Head of Red O’Brien, or The Last Monologue

Tales of our Time