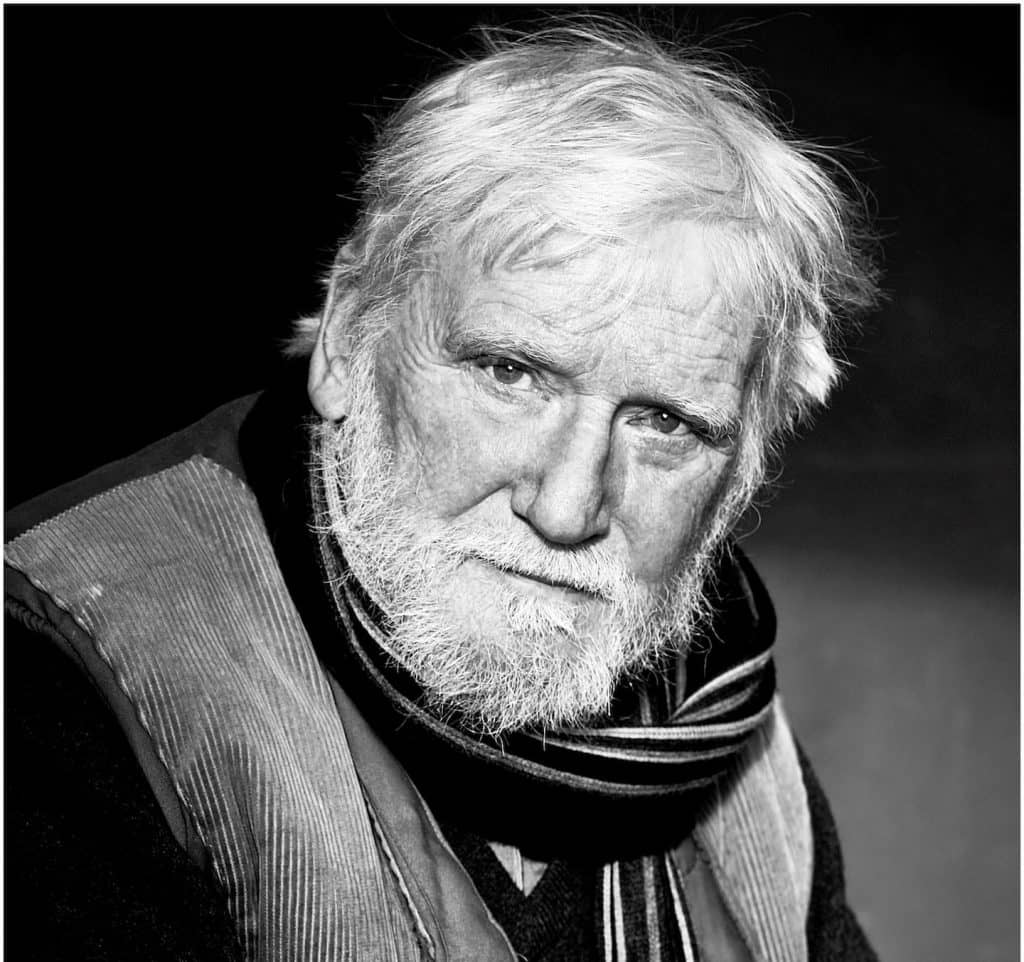 I have a patch of land on a hillside, a few hours from the city where I live. No electricity, no running water, just a ruined house I’ve been slowly taking down by hand. It’s an abandoned farm at the end of a valley, part of a village that emptied out decades ago, and at first I had to cut back the forest just to be able to walk around the house and have open space to clear back the debris from the demolition. I was there last summer, when I got a call; she was very sorry, but she’d been asked to pass on the news that a friend of mine had died. His name was Dermot Healy. I explained that we hadn’t been close. In fact, I hadn’t seen him for fifteen years, since I’d moved to Bucharest. I was standing in the open as I spoke, on the upper storey of the house, the roof and walls from the upper level gone and a clear view down the wooded valley.

I met Dermot Healy in Tigh Neachtain in Galway on an April morning in 1999. I stepped into the dim empty pub and wiped away the tears caused by the icy wind gusting in the street. The wind was what I was trying to get away from. The only other customer, standing at the bar, was a dishevelled bearded man who hadn’t slept well and was trying to repair his guts with a brandy and port cure. ‘Let’s hijack a car and go to Sligo,’ slurred the man with the beard. He was anxious to get home, but the logistics were looking tricky. I recognised him from the photograph on the back of one of his books. I was jobless at the time but I happened to have the keys to a borrowed car in my pocket. An hour later we were on the road, heading north.

I had turned thirty a couple of weeks before in a windowless unit in an industrial park outside Athlone, earning money by participating in clinical trials for morphine sulphate. I’d spent a decade moving around, doing various jobs. And I’d been writing for about five years. I wrote stories in longhand and threw most of the pages away. I didn’t own a computer. I never sought the company of writers, either the published or unpublished kinds, and probably Dermot Healy was the only writer I would have wanted to meet. The other ones who interested me were dead already or in foreign countries. Healy had written an extraordinary novel called A Goat’s Song. I had read it twice. Its mood of strangeness and disorientation intrigued me. The central character was undergoing a mental breakdown, concurrent with the collapse of a relationship with a woman, and a lot of drink was mixed in. There were scenes of paranoia and jealousy set against the background of the sectarian hatred of Belfast, others against the landscape of the west coast of Ireland, familiar yet transfigured. And there was Healy’s way with dialogue, idiomatic yet strange, fragmented and allusive. Lyrical, cunning writing that pushed you off-balance even as it drew you in. Healy ruled a space where another set of rules applied. This, I thought to myself as I read, is something that can’t be taught.

We’d set off on our trip together as if it were the most natural thing, but as we drove out of Galway, me asking him questions about his work, he told me that he knew why it had happened. It was because I was a writer. I agreed I was, though I was unsure if this was true. I’d thought I’d offered to drive for him because I was a reader.

Through Sligo town, past Ben Bulben, past Lissadell – Dermot’s house was the last one at the end of the road on a peninsula poking westwards into the Atlantic. He was a man who liked to lean into very strong wind. His home was an old cottage that he had renovated. He had to keep dumping truckloads of boulders on the shore because the Atlantic was taking chunks out of the land, advancing towards the house. He said he could feel the shock of the really big waves through the rock as he lay in bed.

A few hours later, we were back in Sligo, and Dermot delivered a few words at the opening of a friend’s art exhibition. ‘Did I sound drunk?’ he asked me, nervously, afterwards. He didn’t enjoy public occasions. ‘You sounded fine,’ I said. I’d driven us between a number of pubs in the course of the day. But I hardly touched a drink until after the last one, on the home stretch back to Dermot’s place. It was a bottle of rosé and very cold from being left in the car, and we passed the bottle back and forth and I took it very slowly down the quiet back roads in the slanting lucid evening sunlight. We’d both done our jobs for the day and were in no hurry.

Dermot’s wife Helen was back at the house and some local friends of theirs called around. He told people I was a writer, that we’d hijacked a car. We drank and talked and read poems – this was new to me – and I read a translation of an old anonymous Irish one that was wild and like a prayer, and I read it well. ‘Anonymous, he’s the best,’ said Dermot. ‘Because he doesn’t give a fuck.’

The next morning I was away before Dermot was up. It was a clear morning and ahead of me was Ben Bulben, gleaming with frost and snow. At that point I had decided I was a writer.

I met Dermot on a couple of occasions after that. The last one was in early 2000, just before I left the country. I knew the time had come for me to settle down to work and that it was just a matter of getting a little room in one of the cheaper neighbourhoods of Bucharest and closing the door behind me. I had been working as a security guard on night shifts. It was a good way to save money because the hours were so long you had no time or energy to spend it. I worked through the winter and hardly saw daylight during those months. It was a ghostly sensation, like permanent jetlag; you’re walking around but something is missing, perhaps your soul. In late January I quit the job and I hitched up to Sligo to see Dermot and Helen, and to say goodbye. A couple of weeks later I was on my way east. All I needed for my new life fitted in a sports bag. In the bag was a rock, a fossil Dermot picked up on the shore behind his house when we were walking. He gave it to me and I put it in my pocket. It’s still on my work desk today. There were a few letters and phone-calls over the years, and Dermot talked of coming to Bucharest at one point, but we didn’t meet again.

I tell people that my meeting with Dermot Healy changed me, but I don’t mean that he encouraged my writing. I remember, in his living room that winter when I’d given up my life as a security guard, suggesting he read one of my stories. ‘I will not,’ he said gruffly. ‘You’ll only want me to like it.’ I remember the look on Helen’s face – I think she felt bad for me. In fact it was probably Helen who had prodded him to invite me to visit, with something like: ‘For God’s sake, Dermot, be nice to him. You can see he worships you.’ I’m sure that being somebody’s hero was a job Dermot did not need.

About six years later my editor sent him an advance copy of my first book and he wrote back with more enthusiasm than I could have hoped for. But he had reservations about one aspect of the writing, and most of the letter was about that, and he didn’t offer a blurb. I would have wanted Dermot’s words on the cover of my book more than anyone’s, but more than any blurb I appreciated that direct and workmanlike handwritten letter.

We drank and talked until late, on that night before I left the country, and – yes – read poems aloud. I had the pull-out bed in the living room. And just before he took his leave and went down the hall – I must have been talking about writing or getting published – he said, ‘Ah, it’s all just a game of billiards.’

I didn’t understand. What he was telling me – it’s obvious now – is that the little bit of sense you create in whatever holy cell you carve out for yourself will go forth and unite again with the great nonsense of the world, from whence it came. Out there, where everyone figures out the angles and the margins. And your desire to arrive, finally, as a writer – this sacred thing you had in your mind – will always recede away from you, as if in a dream, the harder you pursue it. It is something that will never be in the world. It will never be realer for me than the April morning I drove away from Dermot Healy’s house, a little hungover and euphoric, thinking how I would tell my friends back in Galway what had happened to me, as though the transformation were a tangible thing – and Ben Bulben sharp and glinting white ahead of me, through the windshield of my borrowed car.

The Multimedia Revolution in Poetry

Wonders of the Green Line

A Report from the Mapparium, Boston