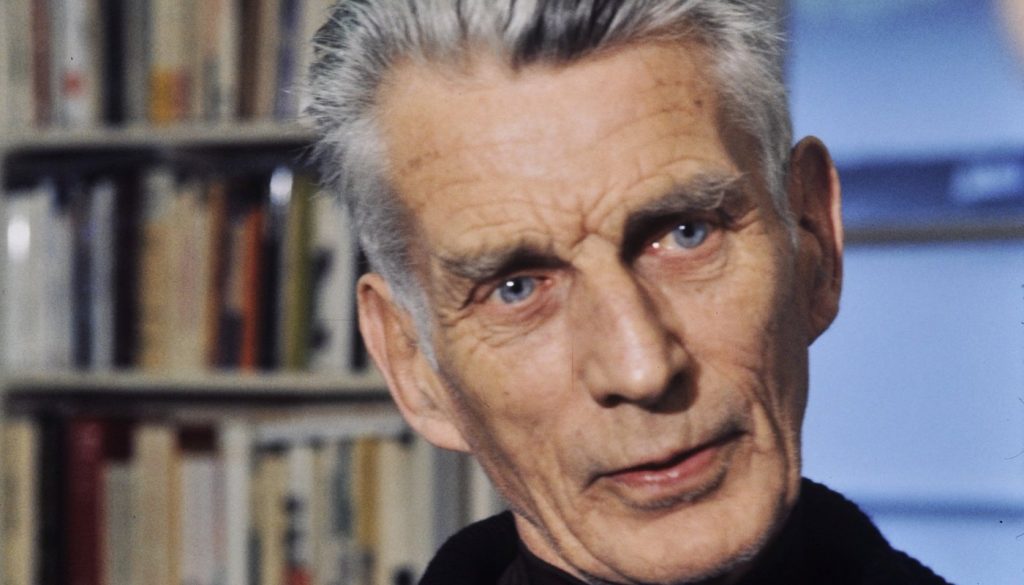 I am a late starter. I was well into my thirties before I read First Love by Samuel Beckett and began writing fiction. And like the narrator in First Love, who associates his marriage with his father’s death, the two things are linked in my mind. If I ever feel satisfied with something I have written I think of First Love. It is good to know where the marker is.

Beckett wrote the novella in 1946 when, having returned to Paris at the end of the war, he embarked on what he later described as ‘a frenzy of writing’. The change to French as his language of composition freed him in some profound way.

When I first read the novella I experienced that rare sensation whereby the boundary between myself and the words on the page blurred and for a time I felt that something in me already knew these words. Obsession, passion, hatred, frustration, chaos, madness, humour, profanity. And shame. Only great writers are unafraid of shame and thus capable of creating literature that carries within it the imprint of humanity.

In that brilliant opening paragraph of First Love, Beckett captures the anarchy of human emotions, the origins of which can never be untangled: ‘I associate, rightly or wrongly, my marriage with the death of my father, in time. That other links exist, on other levels, between these two affairs, is not impossible. I have enough trouble as it is in trying to say what I think I know.’

Even now, re-reading that paragraph my heart pounds. This writer is not going to take me for a well-planned walk, pointing at the colour of the sky to tell me how they feel, while all the time, in the background, an invisible orchestra tunes up for the grand finale. I am not a subtle creature. My blood is red and my mind is tired of wistful meaning. I read Beckett to know that I live in my body, that facts tell us nothing, that truth is not accuracy, and that the struggle of life can be very funny. The humour in First Love is at times very silly: ‘Personally I have no bone to pick with graveyards.’ And at times very black: ‘The mistake one makes is to speak to people.’

I also read Beckett for the beauty of the language. A simple placement of commas creates the shock of poetry: ‘It was December, I had never felt so cold, the eel soup lay heavy on my stomach, I was afraid I’d die, I turned aside to vomit, I envied them.’

But first and foremost I read Beckett for the thrill of subversion. He undermines every norm of storytelling, and in doing so twists the world just a little off its axis, so that, for the reader, it never looks quite the same again.

Let’s start with plot. The story of First Love is as clear and indecipherable as a dream. Following the death of his father, an unnamed narrator, suffering from constipation, or perhaps diarrhoea, is put out of his home. He finds a bench in a graveyard and settles down for the night, only to be disturbed by a woman. ‘Shove up,’ she tells him, and a love story begins. And what a love story it is. When the narrator complains that he cannot stretch out, the woman tells him to put his feet on her knees, but when she begins to stroke his ankles, he considers ‘kicking her in the cunt’. The romance thickens. Unable to free himself of the disturbance caused by the woman, the narrator moves into her two-roomed dwelling and, after clearing all the furniture out into the corridor, they share a night of love, conceive a child and observe the withering of a hyacinth. On the night the woman goes into labour, the narrator, who cannot bear the sound of her cries, puts on his coat, greatcoat and hat, and leaves, never to return. So much for plot. To offer a synopsis of First Love is as absurd as offering a synopsis of love itself.

With regard to setting, we guess that we are in Ireland. After all, the narrator observes, ‘What constitutes the charm of our country, apart of course from its scant population, and this without help of the meanest contraceptive, is that all is derelict …’ And we infer from the reference to two canals that our exact location is Dublin. That’s it.

As for character, the narrator is a devious simpleton prone to hypochondria and misogyny, while the woman is a mawkish prostitute who is only barely sketched into the story.

And yet, despite the gothic absurdity of its narrative, the novella reveals something about the delirium of being in love that cuts through the trivial treatment of that theme in so much other writing. After his first encounter with the woman the narrator is in turmoil. Desire has taken him over and he can no longer experience himself as truly alone, no longer attain that state in which the self is dulled and so becomes the non-self. He refers to love as ‘banishment’. In an attempt to break free of the hold the woman has on him, he abandons the bench and takes refuge in a deserted cowshed, but even there he has no peace. When he finds that he is inscribing the letters of the woman’s name in an old cowpat, he is forced to accept that what he feels goes by ‘the dread name of love’. The primary desire the narrator feels is to be free of love and so, to escape the terrible hold the woman has on him, he moves in with her—the oldest cure in the book! ‘I did not feel easy when I was with her, but at least free to think of something else than her, of the old trusty things, and so little by little, as down steps towards a deep, of nothing.’

In First Love, Beckett presents love as inexplicable. The object of the narrator’s desire has ‘a face like a millions of others and fat thighs’. She doesn’t even have a stable name. On a whim the narrator changes it from Lulu to Anna. The only singular quality ascribed to her is that she sings ‘some old folk songs’, and not very well. And the narrator doesn’t think much of women anyway: ‘When at their wit’s end they undress, no doubt the wisest course.’

There isn’t a shred of sentiment in Beckett and perhaps that is why, in the end, the affect is so powerful. The last sentence of First Love may be the most blatantly true thing anyone has ever said about the nature of love: ‘But there it is, either you love or you don’t.’

I mentioned the poetry of First Love earlier, but many other Irish writers do poetry. It is what Beckett does with imagery that is different. I picture him opening a cupboard of images and throwing out every one that has been worn before. Beckett is after the thing itself and not the picture of the thing, no easy metaphors. His is a language born in the subconscious, rich in allusion, uncanny and sticky with association. Playful. Seditious. Blasphemous. Think of the woman in First Love. Beckett offers the reader little or nothing in terms of character. What he offers instead is the being of the woman, as the narrator perceives it: ‘And yet her image remains bound, for me, to that of the bench, not the bench by day, nor yet the bench by night, but the bench at evening, in such sort that to speak of the bench, as it appeared to me at evening, is to speak of her, for me.’

One last point. The most extraordinary aspect of the novella, for me, is the way that the story is told. It is consistently self-conscious storytelling. And this is important. The reader is not expected to simply suspend disbelief and walk straight in to a world the writer has created. This is not Beckett’s style. This is not his philosophy. After all, how we believe and disbelieve stories, position ourselves in relation to them, and understand ourselves within them, is political as well as personal. L’Oréal ads are a story. The Quran is a story. Photo albums are a story. Nazism was one hell of a story. Throughout First Love Beckett sidesteps the narrative to alert the reader to the fiction of all stories: ‘that, that what, that nothing, this sentence has gone on long enough’. Sometimes the narrator addresses the reader directly: ‘and for other reasons better not wasted on cunts like you’. At other times he undercuts the narrative: ‘I sometimes wonder if that is not all invention, if in reality things did not take quite a different course, one I had no choice but to forget.’ He does this because all stories—the ones we read and watch, the ones we tell each other, even the ones we tell ourselves—are constructions, contingent on memory and the demands of whatever it is that we need to believe. There is no such thing as narrative coherence. There is no beginning, middle, end. Nothing happens because it was meant to. We live in a meaningless universe in which we get up every day and strive to make meaning. Reading First Love reminds me of that.

Cathy Sweeney is a writer living in Dublin. She has published short stories in The Stinging Fly, Southword, The Dublin Review, Icarus, Meridian, and in the 2015 anthology Young Irelanders, published by New Island Press.