The Testimony of Elie Wiesel 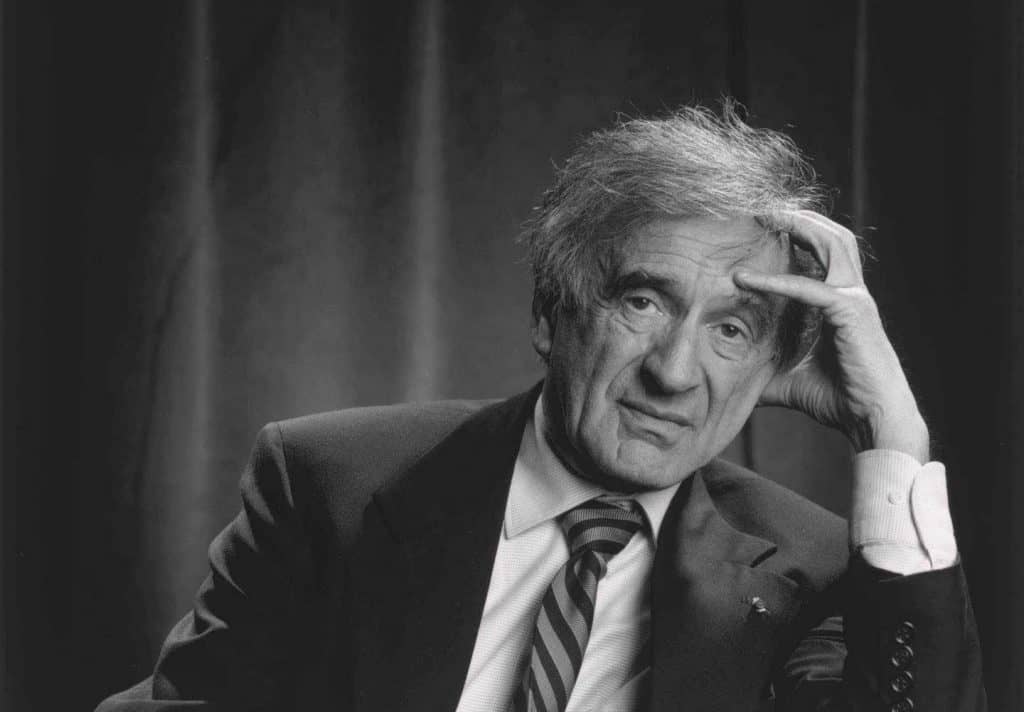 Only twice, to my knowledge, have I met Holocaust survivors.
One jumped naked from a wagon taking her from camp to camp, leaped into the snow and hid in a load of hay while SS men stabbed at the hay with pitchforks. They missed her. She later ran a restaurant in Kansas City, where I would sometimes have lunch. I remember her fondly but forget her name.

The other was Elie Wiesel, who died last weekend, and with whom I spent half a day in New York in 1984. At the time I wrote: ‘He goes about the world asking questions. Few have survived so much sorrow with so much hope, so little self-pity, such indefatigable ambition for a brighter future.’

In these dark, cut-throat days one is entitled to ask: what will we do without him?

The number A-7713 was engraved on his left arm at the age of 15 in Auschwitz in 1944. Of the sixty-odd books he published, Night is the most searing. For example:

One day, when we came back from work, we saw three gallows rearing up in the assembly place, three black crows. Roll call. SS all round us, machine guns trained: the traditional ceremony. Three victims in chains—one of them, the little servant, the sad-eyed angel.

The SS seemed preoccupied. To hang a young boy in front of thousands of spectators was no light matter. The head of the camp read the verdict. All eyes were on the child. He was lividly pale, almost calm, biting his lip. The gallows threw its shadow over him.

The three victims mounted together onto the chairs. The three necks were placed at the same moment within the nooses. ‘Long live liberty,’ cried the two adults. But the child was silent. ‘Where is God?’ someone behind me asked…..

For more than half an hour, Wiesel goes on, the boy struggled between life and death. ‘He was still alive when I passed in front of him.’

Asked how he would define himself, Wiesel responded: as a witness. The talent to write, he said, implied the duty to remind. He quoted one historian visiting a former mass grave and admonishing his companions: ‘Open your eyes and ears, remember every detail, every name, every sigh. The colour of the clouds, the hissing of the wind in the trees, the executioner’s every gesture. The one who survives must forget nothing.’

Wrote Goethe: ‘while others are struck dumb by their pain, God has empowered me to express my suffering.’ You have to use such a gift. Surrounded by books in his sunlit study, Wiesel, a slight, solemn man with mournful eyes, talked about the ‘joyful agony’ of writing. He did not, he said, write for a living—he was for many years professor of humanities at Boston University. He had not yet won the Nobel Peace Prize, but conceded it would allow him ‘to speak with a voice that has more volume. Very few people listen to what I say.’

But does literature—or art in general—make any difference?

‘Art for art’s sake is no longer enough. The art must be set within the context of morality….Today we must take a stand. The writer who does not is simply shutting himself off from tragedy. And there are so many tragedies happening.’

But doesn’t this condemn a lot of writers who are just trying to make a living? (He was good-natured and open to the most outlandish questions.)

‘No, it doesn’t condemn. They probably have as good arguments to justify their attitudes as I have to justify mine. I wouldn’t condemn. I simply say, I cannot do it.’ Still he admits: ‘We don’t produce what we used to.’ He mentions the Dostoyevskis and Tolstoys, ‘but maybe, a hundred years from now, they will say the same thing about their writers, quoting us and saying they don’t have those who are now.’

Night, he was at pains to point out, is not fiction, it is autobiography. It reads like a novel except for one thing—if it were fiction people would refuse to believe it.

It is typical of Wiesel that Night begins with Moche the Madman. Many of his books are peopled with beggars and madmen. ‘I like them because they are the eternal victims. The beggars are the lowest category socially and the madmen are the lowest intellectually. And, somehow, the Talmud says, God is always on the side of the victim. So, therefore, in most of my novels…I make the beggar into a prince and the madman into a sage.’

Moche turned out to be a sage in real life. He lived in Wiesel’s town of Sighet in Transylvania. The foreign Jews—and Moche was one—were taken away in cattle trains as early as 1942. The grief of their departure subsided quickly—this book is a striking testimony to the human capacity for self-deception and inertia. ‘People were saying (the deportees) had arrived in Galatia and were working there and were even satisfied with their lot.’

The truth was, they were slaughtered. Except Moche the Madman, who somehow made his way back home. For days and weeks he tried to warn the people of Sighet, ‘telling the story of Malka, the young girl who had taken three days to die, and of Tobias, the tailor, who had begged to be killed before his sons….’ The people wouldn’t listen—because he was Moche the Madman, and because they did not want to hear the naked truth.

It was two further years before the native Jews of Sighet were taken away. Until the last days, they could have escaped. But they wanted to believe the rumours were wrong, the threat would pass. Then began the interminable train journeys, the horror mounting until horror loses meaning. Until they came to Auschwitz. ‘No one had ever heard the name.’ And this was 1944.

Still the deception and self-deception continued. ‘Conditions were good. Families would not be split up. Only the young people would go to work in the factories. The old men and invalids would be kept occupied in the fields.’

They had it all wrong, of course. Wiesel’s father and mother and sister had also been taken away. As they entered Auschwitz, an SS man ordered, ‘Men to the left, women to the right.’ Wiesel writes, ‘Eight short, simple words. Yet that was the moment when I parted from my mother….I went on walking. My father held on to my hand.’

The three perished. His father almost made it to liberation day. The two stuck together through the atrocities of several camps. As his father descended towards death, Wiesel confesses, with enormous frankness, the moments of weakness in which he wished to be free. They got separated on arrival at Buchenwald. As he searched for his father, he thought: ‘Don’t let me find him. If only I could get rid of this dead weight, so that I could use all my strength to struggle for my own survival, and only worry about myself.’ This attitude, the desire to survive, was not unusual. He saw a son kill his own father for a piece of bread before the son was in turn killed by others for the same piece of bread. Because it was dark, Wiesel did not see his father die. In the morning a different dying man was in the bunk.

It was, the Nobel Laureate says, sheer accident that he himself survived. Or a series of accidents. At the end, when Jews were taken away in thousands to fulfill Hitler’s plan of extermination, he was always in the last hundred for whom there was no room.

Might this not be fate, part of some higher plan? He refuses to accept this—it would imply a plan according to which the others must die. Again and again he asks: why me?

In a separate interview Wiesel explained: ‘The magnitude of the catastrophe, the absurdity of the tragedy, the silence of the world, the responsibility of the accomplices, the very fact that it could have happened, and the very fact that it could have been avoided—all these elements make it into a mystery, almost a religious mystery with theological implications. This is really the story that we try to tell.’

References to miracles crop up frequently in Wiesel’s writing and conversation. They bring to mind the words of Simon Wiesenthal, ‘If a Jew does not believe in miracles, he is not a realist.’

Can there be an end to all the past and present travail?

‘I hope, as a Jew, that there will be an end to it, when the Messiah will come.’

Will the Messiah be one person or a whole new dispensation?

‘There are several traditions. We speak much more of messianic times than of the Messiah himself…. I look around and I think the Messiah is in everybody. I believe with all my heart that the Messiah will come, although he is late in coming.’

Again and again he points out that he has no answers, only questions. He tells me of the Jewish tradition, when times are bad, of putting God on trial. He wrote a play about such a trial, in 1649, in Shamgorod in Russia. A striking feature of the play is the inability of those involved to find someone to defend God.

Nor is this a far-fetched plot from ancient history. Wiesel witnessed a real-life trial of God in the concentration camp. It was presided over by three rabbinical scholars, all of whom perished in the camps, one of whom was Wiesel’s mentor. ‘Maybe you will survive,’ this man used to say to the teenager. ‘We would be carrying stones and he would walk in front of me and teach me.’

And the camp officials allowed it?

At the real-life trial, the three judges found God guilty. There was a long, stunned silence among the congregated Jews, Wiesel said. Then his teacher, who was head of the tribunal, broke the silence: ‘And now, let us pray.’

The company that night keeps