Notes From The Void 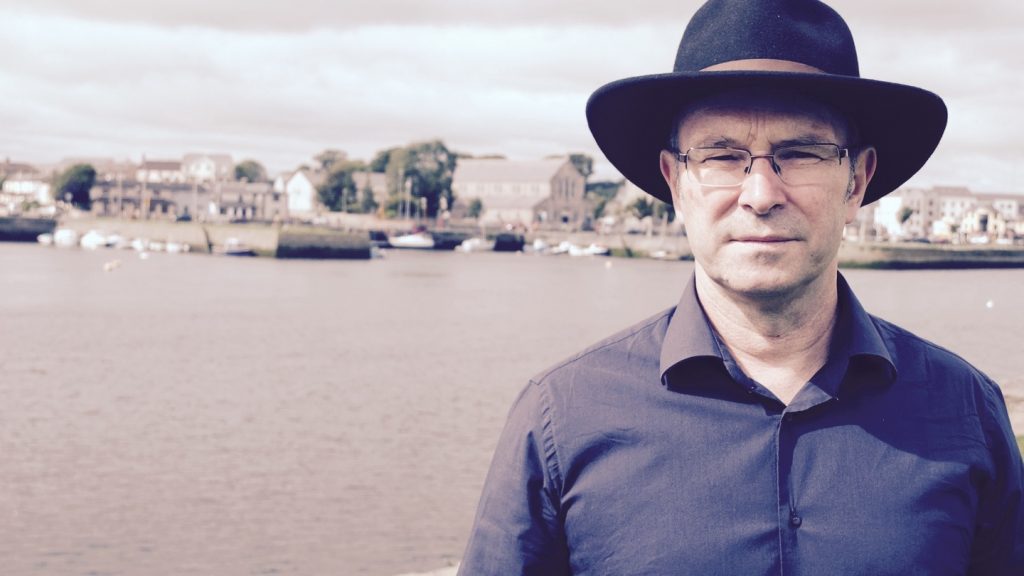 Prose is all about the sentence and poetry is all about the line. This is how I remember a teacher telling it to our class of writerly wannabes. And just as a line can, in theory, accommodate several sentences, a single sentence can go on for… well, a good many lines. Here, then, is a work that, not unlike its revenant protagonist, ghosts within the narrow corridors of line and sentence. Threshold is one of the words Mike McCormack likes to use. Others include: boundary, horizon, contour, hinge, bridge, realm and void. Fifty or so pages in I had a surreal sense of déjà vu. (It’s a sensation I welcome. I find its combination of unpredictability and elusiveness oddly reassuring.) Of course the phrase goes nowhere near encapsulating the sensation this reading experience brings on. And what a reading experience it is. Part ghost story, part social document, part philosophical treatise on the brief time allocated a man, and part domestic recollection on the life and times of one Marcus Conway (father, son, husband, seminarian turned engineer turned benign revenant), Solar Bones is an 80,000-word-long-single-sentence delight (truth be told, it’s not even a complete sentence – there isn’t a full stop in sight).

It’s also a story of order and chaos; of love and loss; a contemplation on the workings of the cosmos; and a depiction of small-town togetherness and opportunism often so memorably rendered by John McGahern, a writer light years away, one would have thought, from the Mayo author’s cosmic sensibility. And as the narrator’s initial perambulations, as far-reaching as they are memorable, settle into a more localised thrust, it is very much the what and the how, the where and when, and who and why, that provides much of the narrative’s pleasures.

Plots belong in cemeteries, said another wonderful experimenter, the too-little-known Scottish author, Jeff Torrington (whose own Swing Hammer Swing! was one of several titles I was put in mind of as I partook of Solar Bones). That said, there is plenty afoot. An entire water supply tainted by faecal matter. A gallery exhibit suffused with contributions from the artist’s own blood. A spuriously-foundationed primary school, the construction of which has ground to a halt due to the reluctance on the part of the engineer-narrator to sign off, and that has one local big-wig baying for blood lest the new building’s delay wreck the budding politician’s numbers come voting time. And we are presented with not one but two father-son relationships; the one conducted continents apart and over Skype, and whose conversations reference Radiohead, Battlestar Galactica, and a pitch for a computer game called Civilisation; the other a more muted and local affair that ticks along on a diet of silence, stubbornness and coded suggestion, and whose warp and woof is more reflective of a fading generation. Again, it is Marcus Conway, our back-from-the-dead narrator, in the roles of Skyping father and misunderstood son, who is the hinge crucial to the undulating dynamics.

It is also a nuts-and-bolts paean to that unsung profession of civil engineering, with a profusion of sign-of-the-times construction (from road, bridge, private dwelling to the buzz and hum of hill-planted turbines – ‘God’s breath across the land’, in the words of one eloquent local) cueing up to evidence the profession’s lasting contribution. And there is geography. Layers and layers of it. River and sea and wind and rain. Mountain and field; hedge and heather; scutch and weed. The boggy badlands and lurking backwaters of west Mayo. Places called Crossmolina, Attymass, and Ballycroy. Carramore, Roonagh, and Pullathomas. Old Head Pier and the Priest’s Lep. Everything, really, that has been packed into the sod and stone of County Mayo. The entire landscape a conjuring of symbiotic harmony. The time-and-time-again interplay of the routine and the extraordinary; of quotidian and mystic, like part of an ongoing pact out to reinforce my sense of déjà vu.

Of course there is something wonderfully elemental about all of this. It’s as though a cosmic metronome is ticking stoically over everything, another double-swing hinge. The one way a reaching back, to primordial time, almost, when forces other than mankind held sway – a living, breathing vortex wherefrom everything derives. And the other, a looking forward (or at least an attempt at such a specious activity) into some unknowable void; a pointer towards some unending chasm whereto it all returns. And if, somehow, one all-encompassing message has been smuggled into the narrative’s ordered chaos, maybe it pertains to some elemental core we are all part of, to an awareness of some vital charge propping it all up, something that cannot be seen, invisible but there.

For Marcus Conway, awareness of sorts arrives to his nine-year-old self upon sighting his father’s dismantled tractor engine, the randomly scattered parts kindling an early suspicion that perhaps the world is a lot less bolted together than he had hitherto imagined. This evolves further with his subsequent vision of a low-loader painstakingly freighting a prone wind turbine through the streets of Louisburgh. Marcus regards the ‘fallen’ turbine with wonder and regret; his sorrowful conclusion that the world was forfeiting one of its better ideas is emblematic of the pathos to come, and puts me in mind of the Nabakov story ‘Signs and Symbols’ and that story’s nigh unbearable poignancy as the narrator contemplates the fate of tenderness in a squandering, wasteful world.

These early impressions are crucial to the formation of a curious sensibility, fomenting an eagerness within Marcus to know more of the workings of the world he is growing into. It’s a keenness that has Marcus embark, firstly, on a spiritual journey (a two-year stint at the seminary to be precise); and later, onto the more (ostensibly) regimented path of a career in engineering.

The progress of his life is defined by several other markers: his first voting experience; marriage; the arrival – via a minor conjugal crisis – of his firstborn; his daughter’s debut solo exhibition; his son’s exodus into the big world; the death of his mother and the subsequent derangement his father lapses into; confrontation with the local man-about-town; the outbreak of Cryptosporidium; the catharsis that finally arrives as he takes a coastal drive and contentedly accepts his own place in the grand scheme of things.

For a time, however, contentment is hard won. The combinations of helplessness and incomprehension Marcus feels by turn in the face of his wife’s illness, his fading father’s sudden and inexplicable rancour, his daughter’s provocative artistic gesture, continually mess with his engineer’s sense of structure. As though order and chaos are determined to constantly have it out with each other, with Marcus (and by implication every last one of us) by now assuming the role of little more than plaything for the gods. It’s a theory teasingly played out by his son and daughter, and their view that Marcus’s life-detour to the seminary was actually part of God’s plan to school a farmer’s boy in the fine art of seduction. The tone (here and elsewhere) a well-held balancing act of poignancy and play.

The prose flits, hovers, drifts, swoops, dips, dives and soars. The ruminative trajectory accommodates a delightful medley of digression, side-avenues, leaps and bounds, swerves and switch-backs, flight and plunge. The various narrative strands and thematic concerns nod to, touch off and pull away from each other, only to greet each other once again further along, the looping style – like a finely measured piece of music – throwing timely light on what has already passed. This is best exemplified near the end, perhaps, with Marcus experiencing a return-to-childhood-like moment of wonder when the engine of a long-since neglected old banger somehow catches. At numerous junctures – and for a variety of reasons – the writing summons to mind an eclectic array of stylists. There are very real traces of the great WG Sebald’s wonderfully hinged sentences and the free-flowing poise of Thomas Bernhard, himself a lasting influence on Sebald. Shot through, at times, with the elegantly morbid wryness of José Saramago; the spare cinematic style of the later work of García Márquez (Chronicle of a Death Foretold comes to mind); the strange beauty of another ghost story, Don DeLillo’s The Body Artist; and it would be remiss to forgo a mention of that gone-too-soon master-chronicler of the void, Roberto Bolaño. The linguistics of Banville abound. The first-principles philosophising of Martin Heidegger. And there is a tentative nod to Cré na Cille, the memorable Irish language author Máirtín Ó Cadhain’s saga of squabbling corpses. All in all, then, a hybrid emerges, and a glorious one at that. It becomes that idyllic thing – a consummate threesome of form, style and content.

I think it was the German mystic-philosopher Novalis who said that the seat of the soul is where the inner world and outer world touch each other. It could be a by-line for where Marcus finds himself when presented with the ultimate threshold this novel seeks to cross, and in doing so, leaving behind, for now anyway, its myriad links, bonds, ties, and connections in all their maddening necessity and fragile cohesion. Husband and wife; father and son; fly-by-night politician and responsible engineer; electorate and elected; sod and stone; land and sea; night and day; order and chaos; past, present and future; the flip-flop everyday of small-town life and the secret processes of the universe; the known and the unknowable. And ever present, it seems, on this day of the dead, the tolling of that Angelus Bell, an omnipresent reminder to Marcus where he has come from, where he is returning to… Are you a river or a canal? I remember hearing an antique relative of mine once ask of an even more antique relative. Solar Bones is a free-flowing, meandering, warped-and-twisting-back-in-on-itself dreamtime trip of a river, here gushing, there tranquil, and one you may wish to step into again and again.

Finishing the book (and that rousing Beckettian imperative to carry on), I found myself going back to the beginning and starting all over again. But was this a starting afresh or merely a continuing on? Either way, I had no problem – it was 5 am, the morning was taking on light, and I had another blast of déjà vu to look forward to…

Alan McMonagle has written for radio, published two collections of short stories, and contributed to many journals in Ireland and North America. 'Ithaca', his first novel, will be published by Picador in March 2017.