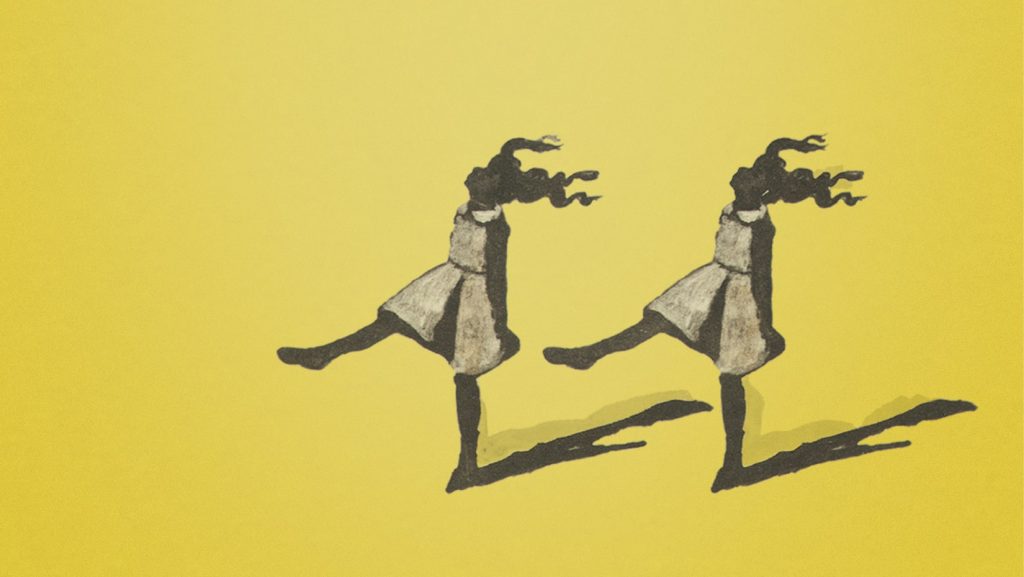 About halfway through the story ‘Track’, a man and woman argue in the back of a cab.

They are boyfriend and girlfriend, on their way home after a dinner with the man’s friends.

The man feels the woman let him down at the gathering. She did not interact, or speak enough, with his friends; she did not conceal her indifference enough to his friends.

‘Every dinner you don’t say a word,’ the boyfriend presses her. ‘Tell me one opinion you have.’

The boyfriend or the Comedian as he is referred to throughout the story is not a boy. He is an older man and famous, famous enough to return from walks down the street ‘aggrieved and frustrated by how much people adored him.’ The girlfriend is a young woman, Irish and recently moved to New York after an unspecified psychic collapse, and she is an unknown, in the sense that she is not famous and does not want to be, despite the Comedian’s blasé insistence that she ‘looked like something audiences might want.’ While they were with his friends she was consumed by a vision of walking through an airport, ‘browsing through the duty free, doing various breathing exercises at the carousel, watching a beautiful tide of bags tumbling out.’

When we first encounter them in the stories within Show Them A Good Time, they are already enmeshed in the uncertain, the treacherously shifting circumstances, of adolescence and young adulthood.

In the story ‘Sweet Talk’ a teenage girl develops a crush on a somewhat gormless Australian labourer living in a caravan at the end of her parents’ property. The protagonist of ‘Parrot’ finds herself first the mistress of a married man and then the surrogate mother of his son in a foreign country after the man leaves his wife and moves them all to Paris. In ‘Abortion, A Love Story’ a dysphoric undergraduate enters into an intense relationship with a fellow student and aspiring playwright. Often these young women are willing, at least intermittently, to doctor their behaviour according to type, to assume the performative harmlessness of women who find themselves in difficult circumstances.

From the story ‘Hump’:

I passed out the sandwiches. The sandwiches were clingfilmed and oddly perforated, like they had been pierced again and again by cocktail sticks. I said “Sambo?” to every single person in that room. It was a good word, a word I hoped would get me through the entire evening.

The sandwich-bearer here, it should be noted, is hosting her own father’s funeral.

In one sense, this is and always has been the expected business of women: the business of mitigation, the management of the pains and the desires of other people, whether those other people are parents, bosses, boyfriends, children, the community itself. For the most part, at least at the outset, the women in Flattery’s fictions are willing to not ruffle feathers, or make things worse. They possess almost no power, are unsure not just of how they might acquire it, but are also unsure if they even want it.

‘I did my best to be well-mannered, kindly, uninventive,’ insists the narrator in the collection’s title story. She is a young woman on a purgatorial work placement scheme, working as a garage attendant in a real garage baffled customers are politely turned away from because while the garage is indeed real, her job is not. Her job consists only in unending training for the job. As she explains to customers: ‘I’m sorry I can’t help you in any way as this establishment is a participant in a training scheme designed to improve my skills and eventually lead to long-term employment.’

And yet, her boss, referred to only as Management, continually exhorts her to work harder and more dedicatedly at this non-job: ‘Management explained the procedure again. Our function was to be near the till, maintain the appearance of the garage, and, most importantly, believe.’

The story, ‘Show them A Good Time’, is a brilliantly witty depiction of the compulsively extractive logic of power – in this case managerial, corpocratic – that always demands more of the powerless. Though Flattery’s characters are willing to concede their powerlessness, this concession is not enough for them to be left alone. In fact the more powerless you are, the more that is demanded of you.

As the late cultural critic Mark Fisher elucidated in his book Capitalist Realism, this is the sick joke of the late-capitalist, neoliberal power structure which holds absolute sway over the generation Nicole Flattery comes out of and writes towards: It’s not just that you have to give into power, power also demands that even as you do so, you still go through the motions of agency, that you perpetuate the fiction that the choices you are required to make by the rules of a game that is irremediably rigged are nevertheless choices you are making of your own volition. As Flattery’s characters sooner or later realise, there is no way to win a game that’s rigged, and yet they won’t let you not play.

‘We fell into silence,’ the girlfriend in ‘Track’ tells us, in the back of the cab with her sniping boyfriend, the Comedian. But what she means is she does not speak. She chooses silence, non-engagement, perhaps the only meaningful act of agency of a person who has none.

Flattery’s characters, no matter how inexperienced, or frazzled, or disoriented they are, no matter how powerless they are, are seeking agency, but crucially it is not an agency defined by the terms set by those who hold power, whether bosses, bad boyfriends, or domineering parents. In their reticences, in their resolute refusals to surrender their own opacity, to refuse to pretend that the uncertainties that define and confine them are not there, Flattery’s characters do something like sabotage the machinery of these rigged games they are required to participate in.

In ‘Track’, while no outward event disturbs the dynamic of the couple’s relationship – the old comedian, now an afternoon sitcom star, stays famous, and the young girlfriend remains a nobody – as the story progresses we watch the girlfriend become somehow threatening in her anonymity, in her willed state of gathering negation. She finds an online forum dedicated to lambasting the Comedian’s career and becomes an enthusiastic anonymous poster on there. Putting on her make-up one day, she observes herself in the mirror ‘fearfully, as if I was an animal capable of bizarre and impulsive movements.’

In ‘Abortion, A Love Story’, a story I have never read anything quite like, the students Natasha and Lucy put on a show, a play called Abortion, A Love Story. The play is its own booby-trap, and goes off like a bomb. It is a dazzling fractal, a cascade of false starts and feints, scenes conjured and almost instantly abandoned. It is a parody of, and homage to, Irish writing, it is a parody of this very book, it is baroquely bizarre and ferociously sincere. You have to read it to believe it.

Which is something I would say about the entire collection. Whatever else these stories are – and they have much to tell us about how we live now – they are wildly entertaining reads. Flattery can do almost anything with the sentence. She captures characters and relationships in one-liners that crackle with unerring timing and verve and terrible lucidity.

Of the tentative affections between the garage attendant and her workmate Kevin, Flattery writes: ‘We both shared dim dreams of self-assertion, fantasies where we fought and emerged triumphant. We trusted each other. We made confessions. I was probably the sister he wanted to marry.’

Out with her beer-drinking girlfriends, the same narrator observes: ‘Since we grew up with mothers who sat, dour, over their annual wine, we all drank like our fathers. It was our great generational decision.’

One of my favourites is the critique the teenager in ‘Sweet Talk’ offers after watching The Exorcist: ‘The film was dark, but I thought it would be darker, more twisted. It was just priests, really – priests in unusual circumstances.’

Show Them A Good Time announces the beginning of what will be an enormous career. The ulcerous pedants of the internet will point out that the term ‘Instant Classic’ is an oxymoron, but fuck those guys. That’s what this book is. Before we see what Nicole Flattery will do next, enjoy this book, which is one hell of a show.

This is the text of Colin Barrett’s speech from the launch event for Show Them A Good Time, which took place in Hodges Figgis on February 28th 2019.

A Little Before Seven