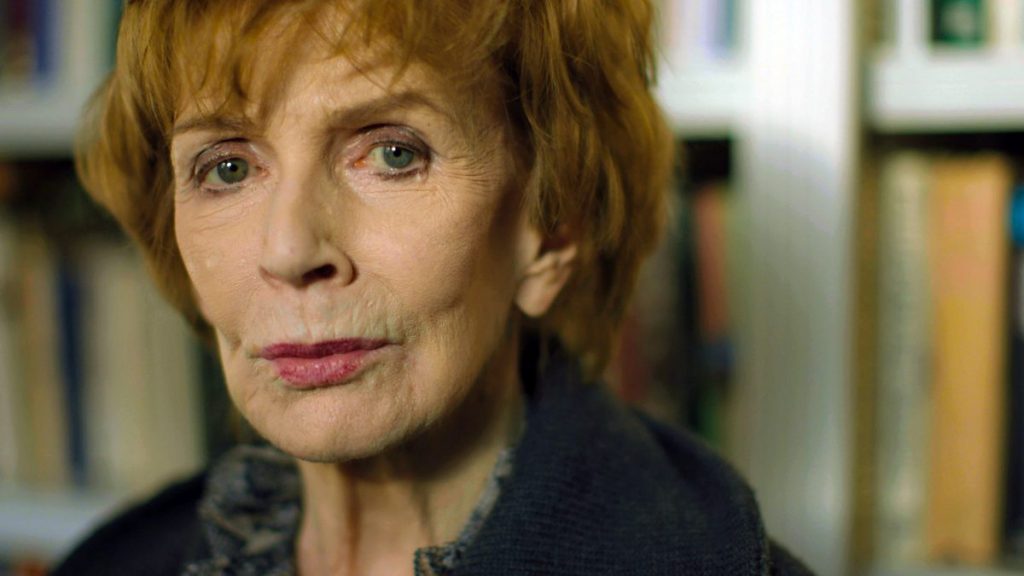 Edna O’Brien knows how to throw a party. Her house in Chelsea was a regular Saturday night fixture of the swinging sixties, with the likes of Judy Garland, Jane Fonda, Sean Connery and Marlon Brando walking through its doors. When Princess Margaret wandered in one evening, the hostess didn’t curtsey to her because her hands were full. The princess was later seen drinking poitín. Those Saturday nights were legendary. Sunday was spent cleaning up. Then, on Monday morning, Edna would go up to the room at the top of the house where she would confront her loneliness, and write about the wind and rain of home.

The last word of Edna O’Brien’s memoir, Country Girl, is ‘banquet.’ A banquet is not quite a party. While you don’t necessarily need an excuse for a party, a banquet suggests something or someone special. A homecoming. A feast fit for a queen. So on this, her ninetieth birthday, I will host a banquet for Edna O’Brien in my head.

It will be a dreamlike affair. Edna will be seen walking up the avenue towards her homestead, Drewsboro, like in the dream at the beginning of her memoir, only there will be no heavy security barring her entrance. The house will be ready and waiting for her. She will slide the hasp of the gate and walk towards home. When she opens the door, she will be in the blue room where she was born, and everyone that she loves and respects, real and imaginary, living and dead, will be there to welcome her. She will receive a standing ovation. They will smile and clap, hand her a glass of champagne and lead her down to the dining room.

Finally, the dining room – the room that no one ever dined in – will be used for its intended purpose. The mirror with the gilt frame will hang over the mantelpiece in the room that young Edna named Heaven. Her favorite china doll will sit on top of the cabinet, returned to her pride of place and Mrs O’Brien’s artificial flowers will look like magnificent, golden spears. The food will be laid out in silver dishes on the arbutus table. Edna will take a seat beside the people she wishes to be near. The familiar face of Carnero, the farmhand, might look up from buttering both sides of his bread and wink at her. He’ll hold up a cushion and offer her a ride on the handlebars of his bicycle later. Then, Edna might catch the eye of an old flame, the nun who she adored during her schooldays in the convent. The nun may speak, or perhaps just give a look that will acknowledge that Edna’s life as a writer bears many similarities to her own cloistered existence. Both vocations require dedication, sacrifice and faith.

There will be great food, fine wine and inevitably, as the evening loosens out, the singsong will begin. Edna’s father might kick things off with a song or two. The Pogues will sing Fairytale of New York to get everyone in the festive mood. The Chieftans and Sinéad O’Connor might drop by to give a rendition of The Foggy Dew.

Over the course of the evening, Edna will go upstairs to a room with the red lamp and hundreds of Aisling copybooks strewn across her desk. Her mother will be sitting in an armchair waiting for her. She will find a way of apologising for blotting out Baba’s words in The Country Girls. Mrs O’Brien will no longer believe the act of writing to be shameful or wicked. Instead, she will see and accept her daughter for what she is – a courageous spirit who spoke truth to power, but who was admonished for her efforts and ridiculed by those closest to her, including her fellow countrymen and women.

Irish people are a judgmental bunch. We love to take people down a peg or two. We have automatic, ingrained ways of keeping tabs on people, especially on women. So when the beautiful, brilliant O’Brien stepped onto the scene, we turned against her. Edna O’Brien has endured decades of being pilloried by her own people.

She has also been misrepresented and misunderstood by critics, right up until October of last year when a snarky, condescending piece about her appeared in The New Yorker. This was not the first time The New Yorker patronized Edna O’Brien. In 1972, Pauline Kael expressed her disappointment that Miss O’Brien, “didn’t move outside the magic circle of women’s emotional problems.” Edna O’Brien established “women’s emotional problems” as a valid source of pain, conflict and humanity in fiction. She has had to continually fight to validate her own view of the world. By doing so, she has made it infinitely easier for the rest of us who follow in her wake.

The time has come to give Edna O’Brien a proper homecoming. I am not much of a party-planner. It is one thing to host a party for a close family member or friend. It is another thing entirely to host a banquet for someone I’ve never been in the same room with. Except that I am regularly in the same room as Edna O’Brien when I settle down to read one of her novels or short stories, or when I listen to her being interviewed.

Edna O’Brien is a year younger than my grandmother. She has access to a time, place and set of circumstances that produced one of the most interesting people I’ve ever known. My grandmother lived next door to me for my whole life. We had dinner together every day, but she still remains the most mysterious and fascinating person I’ve ever met. She was hilarious, private, highly intelligent and yet convinced of her own stupidity. When I read Edna O’Brien’s memoir, she told me things about that world that I would never dare ask my grandmother. It made me understand how my grandmother could be so intelligent and yet believe herself to be stupid. Both Edna O’Brien and my grandmother grew up in a society that oppressed women, sought to undermine their existence and silenced them. That world has not evaporated. I believe that we inherit the emotional landscape of our ancestors’ psyche. For far too long, our collective unconscious has been weighed down by our female ancestors’ confused and frustrated silence. In 1960, The Country Girls was banned because O’Brien was the first person to dare to unpack that silence, and document the inner consciousness of women in Ireland.

Midway through an interview, Edna is asked about that time in her life when she hosted those fabulous house parties in Chelsea. The interviewer suggests that the festivities of London in the sixties couldn’t have been any more different from the Ireland that she had left behind. By way of reply, Edna says that the parties she held in Chelsea were inspired by her childhood obsession with reading about feasts in Irish folklore. When she read about banquets in Irish mythology, it seemed to her that a feast could only be a happy occasion. Then, she recites a verse of the Lamentation of Mac Liag for Kincora. It sounds like an incantation that summons the soul of Brian Ború into the room. I imagine the ghost of Ború, a big lump of a Clare man, wandering into Edna’s house in Carlyle Square, only to bump into Princess Margaret on the stairs supping poitín.

Edna never left Ireland behind her. She wasn’t able to. She keeps us in her head and her heart and tells us the truth, even when it is painful to do so. By reading her words, she continually brings us back to ourselves. And then, she moves us forward. Such is the power of great literature.

When Edna first began to write as a child, she wanted to climb inside the stories she created. She was quite isolated in her own imagination and she says that that isolation has stayed with her, which is a good thing for writing and a drawback for living. I suggest that for her ninetieth birthday, we all join Edna (if she will have us) and enter into an imagined celebration. Everyone reading this will be relieved to learn that this banquet I am hosting is confined to the safe limits of our shared imagination. I have left space for others to add their own detail. Bring your own, if you will. For instance, I have no idea what kind of food we’re having or the outfits people will choose to wear. I’ve made tentative steps towards having a bit of craic, but those suggestions can be easily rectified and replaced by your own invention. I hope that everyone who has had the pleasure of reading and spending time with this great woman will join the feast. Let us raise a glass to the one and only country girl and queen of Irish literature, Edna O’Brien.

Edna O’Brien has written over twenty works of fiction along with a biography of James Joyce and Lord Byron. She is the recipient of many awards including the Irish PEN Lifetime Achievement Award, the American National Arts Gold Medal, the Frank O’Connor Prize, the PEN/Nabokov Award for Achievement in International Literature, the David Cohen Prize for Literature and a Prix Femina Special.  She has lived in London for many years. Her most recent novel is Girl.

Read ‘A Woman In Transit’, an essay by Edna O’Brien from our London issue (Summer 2015), here.

Louise Nealon is a writer from County Kildare. She studied English literature in Trinity College Dublin, and then completed a Masters in Creative Writing at Queen’s University Belfast in 2016. In 2017, she won the Seán Ó’Faoláin International Short Story Competition. She has been published both online and in print in The Irish Times and Southword. She currently lives on her family’s farm where she divides her time between reading, writing and milking cows.

The Feather of Truth