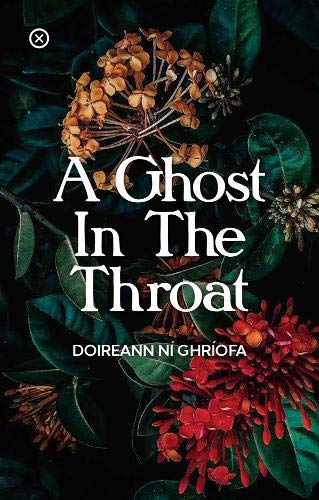 Derrynane House stands at the jagged tip of the Iveragh Peninsula, overlooking the same churning chasm of the Atlantic as it did when Eibhlín Dubh Ní Chonaill lived there in the mid-1700s. The three-storey Georgian house is known today as Daniel O’Connell’s former residence and is preserved by the OPW as a museum to his life and achievements. There is no trace of Ní Chonaill at Derrynane, despite her being the author of the well-known 18th century poem, Caoineadh Airt Uí Laoighaire. Ní Chonaill doesn’t appear at Derrynane, not even as the wife of Airt or aunt of Daniel, the two great men to whom she is normally linked. For all intents and purposes, she was never there. In A Ghost In The Throat, Doireann Ní Ghríofa reconstructs Ní Chonaill’s life, piecing together each instance she is marked as the mother, wife, or aunt of a man, until there is a thorough and brilliant picture. What starts out as an act of curiosity turns into a sort of pilgrimage for Ní Ghríofa, a means through which to understand and anchor her own life. The resulting text is a landmark in Irish writing.

A caoineadh, or keen, is a lament for the dead, a deeply emotional vocal account of the person’s life, sung by the women of the family at the wake or graveside. Keening was as integral to the funeral process as the burying of the body, so it is interesting that it was under female jurisdiction given the inferior standing of women in society at the time. Caoineadhs were not deemed as valuable as writing, which belonged to the sphere of men, and so their survival relied on one generation of women passing down the story orally to the next. Caoineadh Airt Uí Laoghaire is a robust and passionate lament for Ní Chonaill’s murdered husband which first made its way onto the page because of Norrie Singleton, a woman who, as Ní Ghríofa puts it, was “known by her encyclopaedic knowledge of song and story.” Feminised labour is inextricably linked to the caoineadh, creating what Ní Ghríofa describes as “a literary genre worked and woven by women, entwining strands of female voices that were carried in female bodies, a phenomenon that seems to me cause for wonder and admiration…” The question Ní Ghríofa poses with this book is how different history would look if there was value placed on the contributions of women other than as the wives of men or mothers of sons.

Looking at three different modern translations of Aeschylus, all of which are by men, translator and classicist Emily Wilson writes that: “If we are going to have endless retranslations of the same old texts – which is not self-evidently a good thing – we might hope that at least some of them would be done by classicists who are younger, or less white, or less male.” Wilson has translated a number of classic works and in doing so has highlighted the importance of considering the effect, whether intentional or not, that a translator’s biases have on the text. Ní Ghríofa raises this issue in an Irish context with A Ghost In The Throat, showing the reader how essential it is to question the seeming objectivity of translation. It becomes clear to Ní Ghríofa that what we know about Ní Chonaill and how we read the caoineadh are filtered through the perspective of the male academic. Ní Ghríofa outlines the “wilful erasure” of Ní Chonaill by men as she reads different translations of the caoineadh. Uí Laoighaire, as the subject of this poem, has overshadowed the fact that it is authored by a woman, and over time this context was lost entirely. This is why her story was marked as unimportant, until now.

I think again of all those blunt, brief sketches presenting this woman in the thin roles of aunt and wife, occluded by the shadows of men. How might she appear if drawn in the light of the women she knew instead? […] I may not be an academic, but I believe that I can sketch her years in my own way.

While Ní Ghríofa keeps the plates of motherhood and writing spinning, we follow her research through census documents, court records and newspaper archives, where women appear as appendages in the lives of men. Just as Wilson’s interpretation of The Odyssey varies greatly from what we ‘know’ as The Odyssey, Ní Ghríofa’s reconstruction of Ní Chonaill and her caoineadh questions the single truth of translation.

Much of Ní Ghríofa’s poetry, both in Irish and English, deals with motherhood and nature, and the potential for contentment and chaos in both. In A Ghost in the Throat we see her delve into these topics in a way that draws parallels between her own life and that of Ní Chonaill’s. The luxurious and textured nature writing bridges the centuries between the author and Ní Chonaill, pouring life back into the rural landscape that unites them.

The path from the beach towards their home led the girls through the forest. Now, by the same path, I follow, through leaf-light that feels both present and antique… I pause under gnarled oaks and beech trees, my heart fluttering like a bird. A tree has stumbled over, storm-blown. Embedded within its toppled tangle of root and soil are the remains of an old wall, and within that tangle is a door. It must have been swallowed by decades of the tree’s growth, only to be exposed again by its fall. To scramble through, I would have to press my body close to that damp earth. I do.

Ní Ghríofa writes with acute intricacy about the maternal body during and after pregnancy. For the reader, we see the importance, and intensity, of the beautiful moments just as much as the challenging ones. As in previous works like Mandible and Postcards from a Hospital, Ní Ghríofa’s portraiture of motherhood is tender, moving between intimacy and difficulty, highlighting the emotional pressures of raising children.

When she is strong she feeds from my breast, but when she is weak my milk comes to her by tube, by syringe or by bottle. I go to the milking parlour every couple of hours, not only to keep a supply of my milk available, but also because it’s the only thing I can do that feels useful. Whenever my breasts tingle, I tuck some words between elbow and rib and slipper-shuffle back to that narrow room again.

Researching both the caoineadh and Ní Chonaill accompanies Ní Ghríofa through multiple pregnancies, childbirths, days and nights of breastfeeding, nappy changing, bathing, feeding, washing, grocery shopping, cooking, cleaning, playing and driving. Ní Ghríofa brings the domestic in from the sidelines of the canon and positions it at the centre of this book. The work of women writers is so often accomplished during time shaved off the hours dedicated to serving the needs of others, and the architecture of the family is so often built by women, the homemaker being the silent scaffolding of society. With fluid parallels between the repetition of the caoineadh and the repetitive nature of domesticity, Ní Ghríofa discusses feminised labour in the context of “the many shadow-women doing their shadow-work” and the inherited script of motherhood:

One of Ní Ghríofa’s biggest accomplishments with this book is to explore the delicate and beautiful bond between mother and baby, as much for herself as for Ní Chonaill, while at the same time showing the cost that the deep attention of motherhood requires.

As Ní Ghríofa uncovers more about Ní Chonaill, we see how the same consuming aspect of motherhood is present in Ní Chonaill’s story and how little value was placed on this sacrifice. In Caliban and the Witch, an analysis of the role of unwaged, feminised labour in capitalist economies, Silvia Federici writes about reproduction as a source of value creation, and the hierarchical ranking of the body’s physical capabilities which leads to male dominance. Because of this dominance, the time of feminised bodies is worth less than their masculinised counterparts, and the effort of reproduction is in service of male thriving.  Federici examines how “femininity has been constituted in capitalist society as a work function masking the production of the work-force under the cover of biological destiny.” Seeing reproduction as a source of value creation had the effect of seeing women solely as mothers or capable of motherhood. It also separated desire from sex, viewing the latter as the continuation of the species, the hope for a male heir. This narrative has remained steadfast and the separation of desire and sexual agency from womanhood is something we still reckon with. In A Ghost in the Throat, we see how this method of categorisation has led to a disregard for domestic labour and a divvying up of women into either mothers or lovers. In telling her own story while simultaneously discovering Eibhlín Dubh’s, Ní Ghríofa unites the two supposed sides of woman, setting the sleepless nights of desire alongside the sleepless nights of caring for an infant.

It is exhilarating to read what Ní Ghríofa has done with the prose form, blending memoir, biography and auto-fiction to create a sprawling interrogation of self and of womanhood that is unlike anything else. A Ghost In The Throat evidences more of those countless and uncounted hours of feminised work, making domesticity unignorable. Ní Ghríofa writes about how Ní Chonaill created in her caoineadh something that “became an evolving record of praise, sorrow, lust, and reminiscence”. With A Ghost In The Throat, Ní Ghríofa has created that very same thing not just for Ní Chonaill, but for herself, and for generations of shadow-women; for all the time and effort that is either ignored, demeaned or so obscured as to be missed entirely.

Emma Flynn's fiction, non-fiction and reviews have appeared in Banshee, Vox, The Cardiff Review, The Stinging Fly, The Irish Times and others. She was awarded second place in the 2020 Colm Toibín Short Story Award, longlisted for the 2019 Berlin International Short Story Award and shortlisted for the 2018 New Irish Writing in Germany Award. She is currently writing her first novel.

Enda And The Bride of Christ