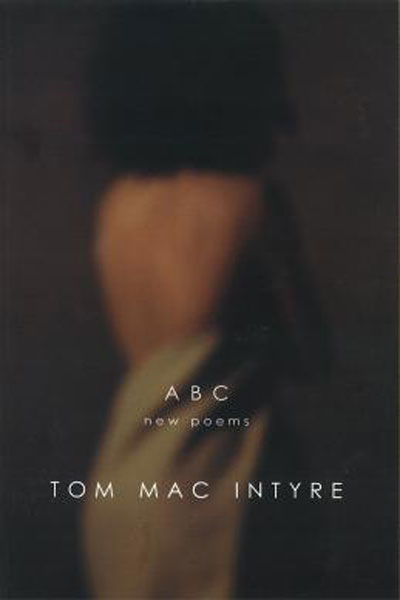 As a literary entity, Tom Mac Intyre has always eluded the lazy pigeon-holing of contemporary criticism, an accolade perhaps, but also an obstacle in the path of any potential audience. Very much the Irish writer’s writer, he remains best known for the inventiveness of his plays, particularly The Great Hunger and Good Evening, Mr Collins, which have established such a reputation as to be almost canonical by now. Yet Mac Intyre’s other writings have been neglected, his lesser known plays for example, or his equally impressive body of short fiction, along with poetry in both English and Irish. ABC, his new collection of verse, provides an impressive entry point into that other half of Mac Intyre’s writing, the dark spaces beyond his popular dramas inhabited by restless characters and grotesque animations.

It is a book in which mortality is an increasing concern for a poet now in his mid-seventies. Aging and death, as experienced by both man and beast, is a recurring theme. It is implicit in climbing to the cairn on Slieve Gullion (the effort required to make ‘arteries dilate’), and in the ‘stir o’ company / ye can’t see‘ experienced by an old woman (‘Bridgie Cleary’). The same unease is unsettlingly invoked in ‘Without Appointment’, where a doctor has taken to visiting the poet unannounced:

‘Yesterday he arrives, sits me down,
inserts a finger in my mouth,
runs it, agile, about the gums.
(What’s he after—trace elements?)
Reservations follow.’

The invasive physicality of this examination is married to the tangible effects of a body wearing out: ‘Poke. Tug. Achilles’ tendon. Knees. / Listen to that grating cartilage‘. Elsewhere characters ask ‘Have you a working pulse?‘ (‘Letter’), or intone how ‘The answer is in The Infirmary‘ (‘Ghost at the Feast’). Mac Intyre even goes so far as to revisit old characters, such as Mad Sweeney, whose story he once reworked into the play Rise up Lovely Sweeney.

But ABC is not all death, darkness and remembrance, far from it. There are poems here where Mac Intyre channels the energy of not just a younger poet, but also a younger land, poems where ‘the dog catches / quartz light / of the mountain rim‘ (‘Buddy’) or ‘The embrace, sovereign, tender, / names you child‘ (‘Reflections on a Horse’). More often than not, these are nature poems in the best sense, focused pieces in which land and fauna triumph over all and, quite literally, earth the poet to something greater than himself:

‘The hills again, the amorous hills,
vigilante eagle again on the prowl;
hunters about, gun-fire peals,
I step into my only
Gospel.’ (‘Eagle’)

People too, and children especially, are intrinsic to Mac Intyre’s conception of life and continuity, though those who profit off of children, such as ‘The Clown’ (‘that portable / hatched grimace testament‘) are hardly so revered. In the poem ‘Travellers,’ we are treated to a portrait of a grandson who:

Only occasionally does the poetry of ABC slide into cliché, and even then the offences are minor. (Why are all our poets fascinated by bee-keeping, for example, or enamoured by the use of ‘gossamer’ as an adjective?) In truth, one would be hard-pressed to find the flaws in this collection; the reader is buoyed from poem to poem with a refreshing zeal and ‘the unforced error’ (‘Encountering Zoe’) is kept at bay. ABC represents a slim, but satisfying success on Mac Intyre’s part, and a comforting reminder that strong poetry is still being produced by the smaller Irish presses.

On that note, special notice should be taken of the book’s production values. New Island’s New Poetry series continues to evolve away from the blocky, abstract covers which characterised its initial releases and on the evidence of this collection, along with recent publications in the series by Bill Tinley and Liz McSkeane, this new direction is a success. ABC‘s presentation is suitably autumnal, smooth and smoky like a half- remembered dream. It is a design which pleases the hand and eye the same way Mac Intyre’s verse rewards the ear, and as such is a pleasure to spend time with.

In nothing is tenderness as important as here