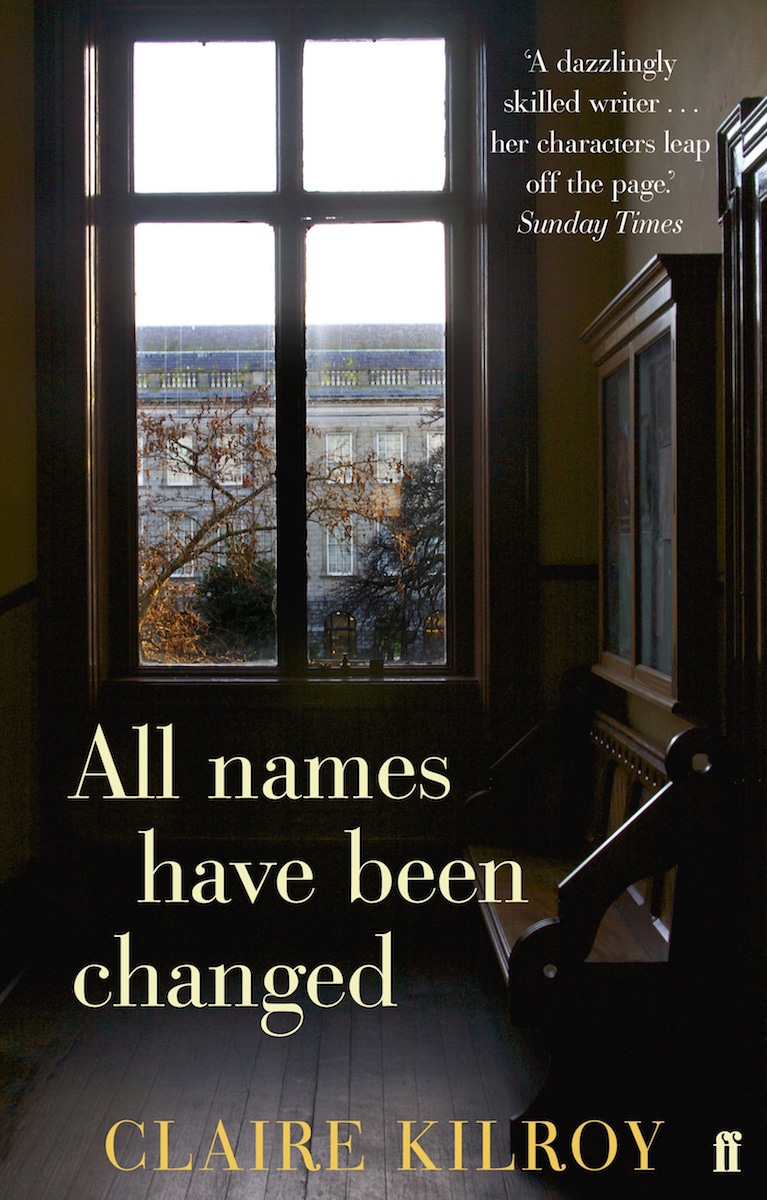 All Names Have Been Changed

‘FROM NOW ONWARDS THE ALL-IMPORTANT FACT for the creative writer is going to be that this is not a writer’s world,’ wrote Orwell some sixty years ago. Now Kilroy, after two highly-praised literary thrillers, has produced that most courageous of things for these times: a literary novel. A serious work it is on serious themes: love, betrayal, the creative impulse, violence, madness and death. Five aspiring writers attend a creative writing course at Trinity during the grim eighties (fortuitously enough as we tighten out belts for another rough ride) where they fall under the spell of blocked Svengali PJ Glynn, novelist, troubled genius, lecher, boozer, cowardly lion.

Where do fictional writers come from? Humboldt was Delmore Schwarz’s gift to Bellow. Joyce drew Dedalus from his own threadbare pocket. Enderby writes the poems Burgess sent Eliot at Faber: ‘Prudence! Prudence! The pigeons call’ (Glynn’s attendant of seagulls shriek, ‘Rain! Rain!’). Who is Glynn? What is he? He is Gavin Ewart’s little fat genius writ large: ‘Don’t expect ordinary behavior/ Or a guide to morals/ A genius is never a saviour/ He only looks to his laurels.’ Well, it’s the sick oyster that produces the pearl.

In the afterword to Lolita, Nabokov explains how ‘the first little throb’ of that masterpiece began to form in his mind. On page 47 of the work under review, narrator and aspiring novelist Declan describes the ‘dullest throb of a notion’ that has begun to form in his. Further down the page he adverts to the difficulty Glynn encounters when the publishers reject the title of his novel ‘Apophthegm’ on the grounds that readers would be alienated by a word they could neither understand nor pronounce. (A dilemma not un-reminiscent of Nabokov’s with Speak, Mnemosyne). Nabokov, however, gets only one mention here and it is the Black Swan’s ‘Sublime Dublinois’ Joyce who seems the book’s presiding spirit, racking up eight name checks by page 62. On page 1, Declan can almost taste the contented melancholy of Glynn’s novels (as surely as Mulligan can almost taste the snotgreen in Ulysses). Glynn, like Bloom, sports a high grade hat. The newspaper ad that draws Declan to Glynn’s reading (where all the principal characters are, unknown to one another, in attendance) is as ‘scrupulously mean’ as the style Joyce chooses for Dubliners.

Aisling, Antonia, Guinevere and Faye, the women with whom Declan and their mutual McFate swap ideas, and in some instances bodily fluids, are discussing Joyce and Beckett when they sweep into the room where they learn to wait. Towards the end of the book, Declan suggests flight to Guinevere in these terms: ‘We’ll go to Paris like Joyce and Beckett.’

After Declan makes love to her, she wears ‘a powder-blue dressing gown and not much besides.’ When later, he catches her post flagrente with Glynn she wears ‘her powder-blue dressing gown and not much else besides.’ On page 63, the tang of rotting seaweed is rank. On page 122, ingrained dirt has a rank tang. One could multiply examples. The Joycean circularity, the subliminal coordinates, show just how carefully constructed a work this is.

The stars of ‘The Italian Job’ were cars. The stars of All Names Have Been Changed are words. Here’s Declan with his landlord:

I followed the haunches of an Offaly man with a beer gut straining the buttons of his teacoloured shirt as he laboured up the stairs. Up three flights to the top floor he led me, jangling his ring of keys as offhandedly as a jailer, pausing on each landing to catch his breath, all the time profaning softly. ‘Mother of God,’ he sighed. ‘Merciful hour. All the angels and saints.’

Here with Aisling: ‘It was her chemical hair that caught my attention as I passed, blacker than anything that occurred in the natural world and as magnetic to the eye as a car crash.’ Later it’s ‘black and blank as a hole in the universe, a rip in the fabric of reality.’

It is writing of this quality that renders solecisms such as ‘stupid nonsense,’ ‘monastic cloister,’ and ‘anonymous poison pen letters’ the more inexplicable. Or are they, like the cluster of cliché on pages 21-22, ‘Few could hold a candle… I was all ears… if the truth be told… a grey area,’ volitional, indices of how much about writing Declan has yet to learn?

There are fine set pieces aplenty. The build-up to Glynn’s arrival and Antonia’s explanation of her need to write are particularly striking. Yet the violence and kitchen sink seediness of the heroin addict Giz, sit as ill as if Henry James had shoehorned a rape scene into Washington Square. And the principals end as happily as anyone in a novel by Pauline McLynn. Oh well, that I suppose, is what fiction means. Not the least of the book’s many pleasures are the titles of the thirty episodes, playfully drawn from (to name but a few) Yeats, McGahern, Maturin, Behan, Plunkett, Banville, Kavanagh, Joyce, Sheridan, Edgeworth, Beckett, and Wilde. ‘I think, you see,’ they say, and ‘I can read.’ Let us be grateful that writers still do.

At the height of his fame Al Jolson would step out of character in whatever vapid musical comedy vehicle he was starring in, sit on the edge of the stage, and tell the punters, ‘Look, the guy gets the girl. Do you want to hear me sing?’ The guy in this book gets the girl. I didn’t care either way. I wanted Kilroy to sing. And when she sings, she makes John Banville look like Benjamin Black.