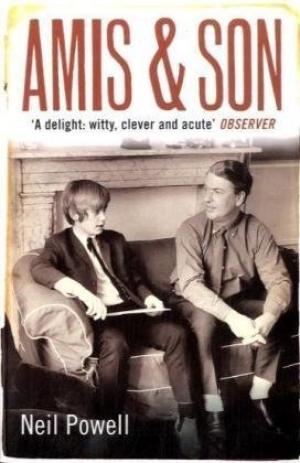 So much information about Kingsley Amis has surfaced in recent years—three substantial biographies and a large selection of his letters, as well as his memoir—that we can scarcely expect Neil Powell to have unearthed much that is new. Nor has he. Drawing on all the above sources, however, he has produced an admirable précis. He writes cogently on The Movement, its members, their interaction and mutual influence. His analyses of the novels and his identification of the characters and incidents incorporated therein with their real life counterparts are scholarly and engaging.

Although they never met, Powell clearly likes Kingsley. While allowing that in later years he often ‘behaved appallingly,’ he is quick to offer explanations: ‘His apparent anti-semitism—like so many of his racists outburts—was a way of masking despair, anxiety, [and] chronic depression.’ Towards Martin he is markedly less indulgent.

Father and son literary firms are pretty rare. Martin instances Dumas père et fils. Powell namechecks Roy and John Fuller (one of his other books is entitled: Roy Fuller: Writer and Society). And Martin thanks the younger of another father-son act for a review of his first novel, The Rachel Papers: ‘Auberon Waugh, son of Evelyn, was very generous. Nobody—literally nobody—was in a position to be more sympathetic. And he wrote his first novel when he was nineteen.‘ Auberon doesn’t rate a namecheck in the work under review.

‘When I’m Sixty-Four’ and ‘Lovely Rita’ despite their jaunty surfaces most clearly reveal the Beatles’ underlying callousness and contempt for other people. They are the perfect theme music for The Rachel Papers as a valediction to the decade in which ‘All You Need is Love’ became a mantra of indulgent self-regard.

Charles Highway, the narrator of The Rachel Papers, is of the opinion that ‘to be against the Beatles (late-middle period) is to be against life.’ And Kingsley’s take? ‘Oh fuck the Beatles. I’d like to push my bum into John L’s face for forty-eight hours or so, as a protest against all the war and violence in the world’ (Letter to Philip Larkin, April 1969).

Powell deplores the violence and pornography in Dead Babies (1975), Martin’s second novel, set in an English country house in the (then) near future. But these are cartoons, prefigurations of ‘Itchy and Scratchy,’ the sixties excess of S. Clay Wilson. ‘The love-child of Jane Austen and William Burroughs was always going to turn out to be an awkward bastard,’ comments Powell. He knows that Martin had read Burroughs’ The Wild Boys because Martin reviewed it in 1972. Of a book reviewed by Martin in 1973, however, he says nothing. Of this (J. G. Ballard’s Crash) Martin later wrote ‘Crash emerged from a background of surrealism, cultural activism, hyper-permissiveness and lysergic acid… Ballard was in any case a cult author. And it was a cult I belonged to.’ Number of references to J. G. Ballard in the work under review: none.

The nods to Harlan Ellison and Kurt Vonnegut go likewise unremarked. Powell doesn’t like science fiction, you see. The title of the opening section of Kingsley’s novel The Anti-Death League, ‘The Edge of a Node’, ‘though conceivably inviting to a science fiction reader, is likely to seem jarringly rebarbative to anyone else.’ To who else? Henry James? Jane Austen? Virginia Woolf? ‘James—like Jane Austen or Virginia Woolf—remained one of those strange Kingsley Amisian blind-spots where chirpy iconoclasm shades into baffling philistinism,’ says Powell. Or perhaps he just didn’t like their books much.

Powell certainly doesn’t like Martin’s. Money is his ‘flawed masterpiece’ (unless he hasn’t written his masterpiece yet), and although London Fields contains many very good jokes indeed it is ‘in places a hideously written book.’ He knows what E. M. Forster would have thought of the characters in it too. He knows that what’s wrong with Martin’s big novels is that they lack ‘the diversity of Dickens or Angus Wilson.’ He invokes a ‘Kingsleyesque voice’ to correct the silly things Martin’s characters say in Einstein’s Monsters. (Though never a Martinesque voice to comment on some of the things that Kingsley trots out.) He struggled to reread Yellow Dog.

He endured The Information’s ‘dreadful prose, which stumbles wearily from alliteration to incomprehensibility to bathos,’ and, after a list of reasons why men cry, a sentence he finds ‘actually meaningless’: ‘And then there is the information, which comes at night.’ Seems plain enough to me. Bad dreams, night thoughts. Here’s a passage from Martin’s Experience: ‘When I was a child I would sometimes hear my father in the night—his horrified gasps, steadily climbing in pitch and power.’

Martin’s literary mentors were Saul Bellow and Vladimir Nabokov, ‘neither of whom writes in English.’ Nabokov ‘never stops showing off his mastery of the language,’ Bellow tries to pick his way ‘between the unidiomatic on the one hand and the affected on the other.’ These three opinions are Kingsley’s. ‘Even if we don’t fully endorse them,’ Powell writes, ‘what’s surely clear… is that Nabokov and Bellow… are not practical beneficial models for a young prose writer.’ This on no other authority than Kingsley’s (whose ‘chirpy iconoclasm’ elsewhere ‘shakes into baffling philistinism.’)

The result of their ‘dangerous example’ combined with lack of proper childhood reading, trying to be an American as a ten year old at Princeton, and overimmersion in pop-song and television culture culminate in this: ‘He does not write recognisably literate English.’ Powell can’t help feeling that ‘our responsibility to our language—and with it something of Eliot’s obligation “to purify the dialect of the tribe”—must override the odd bruising of an ego.’

‘I’ve never met Martin Amis,’ writes Powell, though he disapproves of him treating himself and allowing himself to be treated as a celebrity. ‘Ideally a writer should be more or less invisible, judged solely by his books.’ So much, then, for Byron, Boswell, Johnson, Dickens, Shaw, Wilde, and for Kingsley himself.

‘Martin, it seems, is everywhere; and this has been especially true as it happens, during the months I’ve been writing about him—a circumstance I hadn’t foreseen… When your subject keeps popping up in the newspapers writing or saying daft things, it’s hard not to take notice.’ Well, I suppose nobody expects celebrities to pop up in the newspapers, but ‘especially true’ and ‘as it happens’? What of one’s obligation to purify the dialect of the tribe?

Powell concludes his study thus: ‘A short time ago I coaxed a toad away from the danger of the garden path and into the safe cover of tall plants among which he grappled his way like a mountaineer before turning to glance back at me a bit reproachfully. Now the recently arrived swifts are wheeling and screeching above my walled garden… I think it’s at least as arguable that noticing such things may be a healthier, a “fitter” way of responding to rotten times than obsessively attending to their rottenness.’

Perhaps the world would be a better place if Martin devoted less of his time to composing impertinent journalism and dystopian novels and more of it to being glanced at reproachfully by toads. Alas, we shall never know.

Woman riding on a Cock