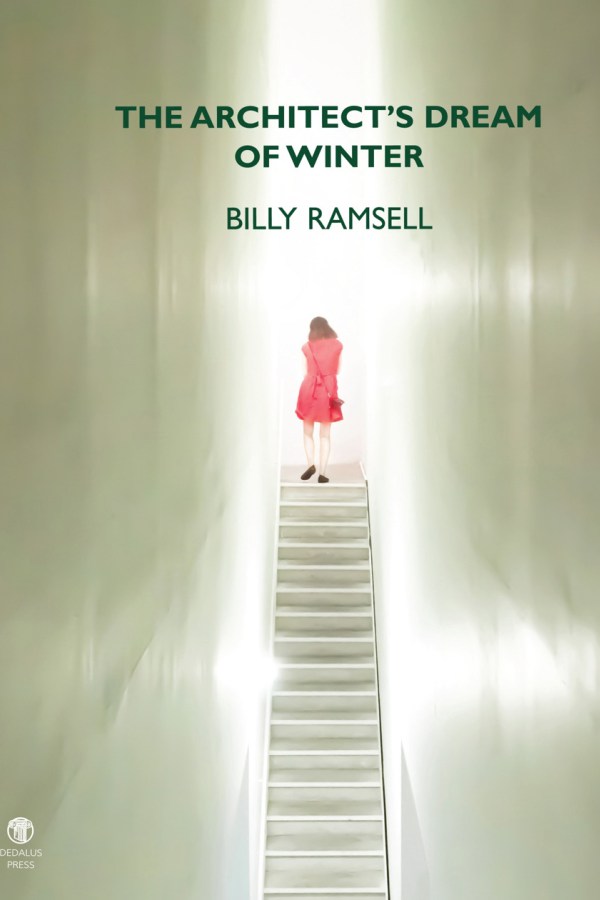 The Architect’s Dream of Winter

Billy Ramsell is a poet of light and silences. That light might as often be a ‘laptop’s glow’, the ‘lilac machine light’ of a hospital respirator, or the flickering of a Point of Sale device as it is the natural ‘buttery sunlight of late morning’. And those silences might—as in the prose poem, ‘The Silence Bar’—be tainted by ‘faint hints of air-conditioning and other machine noise’; they might have become purchasable commodities that can only be defined in terms of techno music at a festival suddenly ceding to ‘the faint strains of lake-water lapping’ or of a stadium’s hush as a penalty kick is taken. But Ramsell is no less a latter-day Romantic for that. His finger is on the technological pulse, but his poems long for simplicity and self-erasure—‘the dream of winter’ that continually threatens the formal architecture of this, his second, collection.

Some of Ramsell’s poems overtly satirise the impersonality arising from our machine-dependence. ‘Your call is important to us’, for example, turns an earlier lyric, ‘After-Image’, into holding-tone muzak. The poem also refers deftly back to ‘Dyna Global’, the company responsible for managing the dystopian archive held at ‘Copper Holt’ (in the poem of the same name) where the machines ‘remember everything’. Sharing its first line (‘Surface to air, the swallows take flight’) with ‘After-Image’, ‘Your call is important to us’ also sends us back to the first line of the book: ‘Surface. Cleanse yourself. Dress.’ This becomes a distorted refrain throughout, the echoes and refrains refusing to regularise into a recognisable pattern but instead acting as so much white noise. The overall effect is of a programme replicating information exponentially while at the same time exhibiting a wholly human nostalgia for its own beginnings.

If Ramsell is sometimes critical of our digital world, he also finds possibility in its promise of a release from corporeality. It’s as though he wants to emulate the effect of Racter, ‘the BASIC poetry-writing software program compiled in the early 1980s’ to which ‘For the Bodiless’ is dedicated and which provides one of The Architect’s Dream of Winter’s two epigraphs: ‘More than iron, more than lead, more than gold I need electricity. I need it more than lamb or pork or lettuce or cucumber. I need it for my dreams.’ Racter’s syntax, though grammatically sophisticated, may seem silly; but its electricity-fed dreams suggest a way of writing a pure poetry unencumbered by what Charles Olson called ‘the lyrical interference of the individual as ego’. ‘You have what every poet envies,’ Ramsell writes,

you have slipped the leash of embodiment
and your lines come together in Aspen clarity;

unbuffetted by hormone-storms
or by the storms of amygdalae
or by love’s violent crosswinds.

Similarly, the epigraph to ‘Still’ advises us not to dismiss ‘the possibility of leaving physicality behind, of transferring human minds to computers, to other storage devices.’ The dialogue that follows puts Ramsell in the company of a line of poets, including Emerson and Plath, who have been lured by self-effacement, by giving up individuality to a not-quite-definable greater whole.

But ‘Still’ also begins with a direct address to a character named Anna. Other proper names—Donncha, Aisling, Angela—crop up at points where there seems to be no requirement for naming, reasserting some kind of individuality in face of oblivion. In one of the refrains of the villanelle, ‘Colony’—‘The machines have entered the language, my love, entered us’—that apostrophic ‘my love’ marks a resistance to machine-language taking over intimacy. These poems everywhere remind us, however, that the language of machines was metaphorical from the beginning. But the metaphors are transformed when reapplied to human life: when Ramsell writes ‘Connect yourself via the ports // in your face’, the words ‘connect’ and ‘ports’ (and the ears that they stand in for) have become electrically charged in a way that their original meanings could not have known. Modernity sometimes also literalises metaphor. In ‘Copper Holt’, the ‘server levels’ are ‘the building’s heart and brain’, but in ‘Dear Heart’ the ‘drummachine’ heart in question is really ‘part-mechanical now’.

Almost every poem in The Architect’s Dream of Winter seeks to negotiate the dialectic between information overload and the attractive threat of everything being wiped. The book’s final poem, ‘Ahead vast systems hunger’, epitomises this, flirting with formal collapse while at the same time answering almost line for line to the poem that concludes Section I—‘They dance to keep from falling’—and completing the intricate structural pattern of the book as a whole. It ends with a depiction of birds, which may or may not be virtual: each

drills toward the sun
its gullet bulging, its gullet full
with squirming iridescence,
through the salty mass upwards against the weight of thick oblivions

The italicized annotation expires, is breathed out, a line before the poem proper, leaving ‘air’ as a last gasp above the thick oblivion of a three-quarters blank page, an attempt to defy the computer’s insistence of closure, and one that is immediately subsumed by a silence that is the defiance’s very justification.

And yet, given the book’s mechanical and digital preoccupations, we might be forgiven for letting this moment of apparent transcendence be interrupted, not by a musical or respiratory air, nor even by the recognition again of that ‘surface to air’ refrain, but rather by the thought of a MacBook Air.

Despite the way these lines play with breath, they are more memorable to the eye than the ear—partly because of the visual replication of the earlier poem (in which ‘falling’ is the word on the brink) and partly because of the greater difficulty of voicing the difference between a punctuated and an unpunctuated ending. In a volume that so often riffs on musical motifs, this is surprising. Consider, for example, the festival-pastoral, ‘Repetitive Beats’, which likewise cuts out mid-sentence: ‘like when the washing machine stops shuddering, like when the’. And consider Ramsell’s lament for the Swedish jazz musician Esbjorn Svensson, which asks—in another fantasy of deletion—if

dying translates us into the condition of music;

leaves us weightless, melodious, floating bars of thought
uploaded like data into the mind of God.

Ramsell’s enjoyment of music is contingent upon reaching a silence within which to contemplate it: ‘after gigs’, he reminds us in ‘Jazz Weekend’, ‘T. Monk would sit in silence for hours on the stage.’ The potential of the ‘Trapped colours throbbing in his strings’ and ‘the pent keys’ tension’ are more exciting than the music itself.

The eye’s primacy is also suggested in the unusual material formatting of the book—about the shape and size of a tablet computer, allowing for long lines that won’t spill over. Individually, none of the poems is quite as impressive as the collection as a whole: you remember what they are about, or how cleverly they reprise other poems, but the lines themselves lodge less easily. All the same, a genuine lyric impulse manifests itself across the collection in a pattern as intricate as binary code, and frequently recalling Wallace Stevens’s understanding that ‘the absence of the imagination / had itself to be imagined’. At the book’s climax, in the comic tone that occasionally surfaces, Ramsell imagines ‘gender studies’ and ‘spray-on tan’—along with the graver concerns of ‘total war’ and ‘weaponised botulism’—as bugs in a perfectly conceived programme that induce ‘the architect’

to dream of winter,
of just wiping the discs and starting again
with a screen clean as her own mind
was at the beginning,
all those versions ago.

As versions go, The Architect’s Dream of Winter is a confident upgrade of Ramsell’s promising first collection, Complicated Pleasures; and it bodes well for those to come.

Alex Runchman is a Lecturer in English for Academic Purposes at the Applied Language Centre, University College Dublin. He is also the author of Delmore Schwartz: A Critical Reassessment (Palgrave Macmillan, 2014).

The US Holocaust Museum