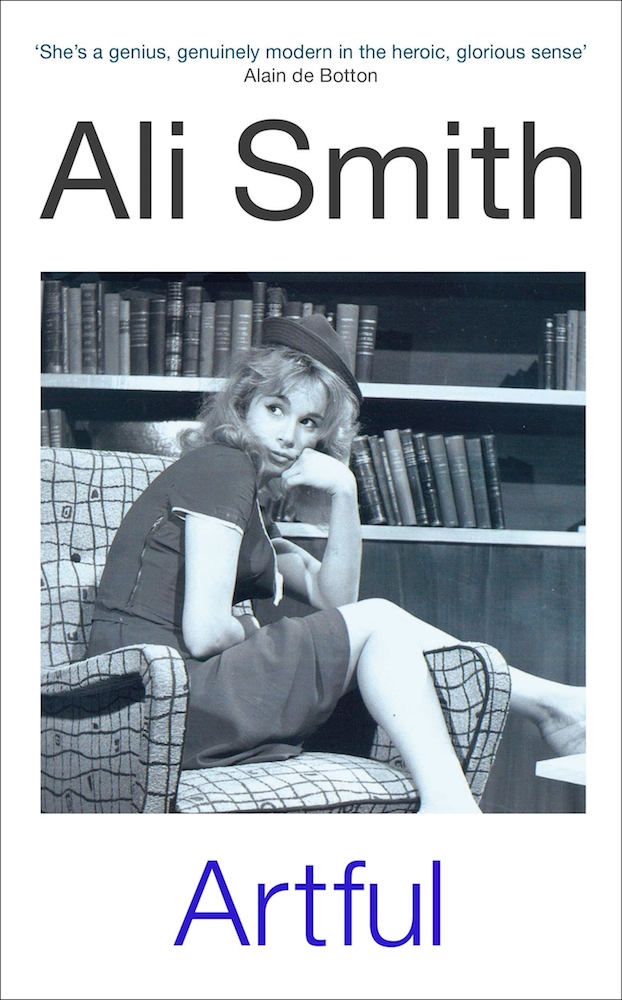 Ali Smith is a Scottish writer best known for the daring and unconventional narrative style she employs in her fiction writing. She is the author of four short story collections and five novels, which have by and large been received with critical acclaim. She has been shortlisted for both the Man Booker Prize and the Orange Prize for Fiction twice, and her novel The Accidental was named the 2005 Whitbread Novel of the Year. Her most recent novel, There But For The, was longlisted for the Orange Prize in 2012. All this to say, that despite her playful and highly experimental narrative style, Ali Smith is taken very seriously as a writer of literary fiction.

Smith’s latest offering, Artful, is a departure from her usual fiction writing. The book is created from four lectures that Smith gave to students at Oxford University, both traversing and illustrating the stylistic themes which form its chapters: ‘On Time’; ‘On Form’; ‘On Edge’; and ‘On Offer and On Reflection’. The book crosses genres; it is part literary criticism, part literature, part scholarship, part story. The narrator, a bereaved tree-surgeon/botanist, of indeterminate gender—perhaps a nod to the similarly gender-ambiguous, bereaved narrator of Jeanette Winterson’s Written on the Body—is literally haunted by her dead partner, a former academic who was preparing a series of lectures on writing and literature just before her death. Smith writes a story about someone writing about writing in order to illustrate the elements of writing, which she writes about in the story. This sort of pleating and involuting of narrative threads, language and allusions, layer upon layer, is trademark Ali Smith.

Artful derives its inspiration from Italo Calvino’s book, Six Memos for the Next Millennium. Composed of six lectures about writing and literature, which Calvino was to deliver at Harvard University, Six Memos devotes each of its chapters to exploring a literary theme or value: lightness; quickness; exactitude; visibility; multiplicity; and constituency. Calvino passed away before he had given the lectures and it was left to his widow to prepare them for publication. The parallels to Artful, both in form and in subject, are striking. In a passage from Six Memos that is quoted in Artful, Calvino writes:

Think what it would be to have a work conceived from outside the self, a work that would let us escape the limited perspective of the individual ego, not only to enter into selves like our own but to give speech to that which has no language.

It is precisely this task that Smith has set herself in Artful. Employing a narration—informed by dozens of other narratives—within a narration, she attempts to escape the limitations of an ‘individual ego’ in order to ‘give speech’ to the elements of writing—form, time, edge, reflection and offer—which themselves are not written.

Smith’s book is named for the Artful Dodger from Oliver Twist, and Dickens’ novel serves as a thematic anchor for the stylistic romps of the book. The Artful Dodger speaks to Oliver in a strange language, a combination of a thick accent and unfamiliar vernacular, which Oliver has to decipher and which brings him to the realisation that words are much more than their literal meaning: ‘It’s as if the Dodger speaks another language altogether; and it’s as if Oliver has to understand that a beak can be more than one thing, and a mill, and all the words that come in the paragraph after too, a stone jug, a magpie. Everything can be more than itself. Everything IS more than itself.’

The premise that everything is more than itself guides the study of the themes in Smith’s book. The chapter ‘On Time’ considers the question of time through a multitude of parallel themes. Time is: death, aging, mortality, narrative, clocks, remembering, ‘one thing after another’, linearity and sequence. ‘On Edge’ yields reflections on: limit, possibility, experimentation, convention, the brink, extremes, liminal space, screens, borders and bridges. And so on. Each theme is explored through an avalanche of literary references and allusions in a ream of free association. Within a handful of pages we scuttle from the legend of Tír na nÓg to Walter Benjamin to Joseph Conrad to Shakespeare to José Saramago to Katherine Mansfield to Michelangelo to Damien Hirst. And this is just a minute sample of the associations on offer. One is left with a dizzying series of impressions, the most enduring, perhaps, being that Ali Smith is remarkably well-read and prone to a touch of literary name-dropping. However, despite the barrage, the references are often pleasing, familiar and thought-provoking.

Ultimately, Smith’s book is about imagination and the relationship between art and life. In this vein, she offers some pearls of reflection about style, literature, reading and writing and, furthermore, executes them skilfully through her own narrative. Musing on creation, she writes: ‘It’s the act of making it up, from the combination of what we’ve got and what we haven’t, that makes the human, makes the art … possible, like it’s the eye engaged in the creative act, in union with a kind of not seeing.’ The blending of what is seen and not seen is a distinct and remarkable quality of Ali Smith’s own writing style. Her use of language is daring yet masterful. Words and statements are left to stand for themselves, often in a play of associations where the gaps are as important as the connections. Consider this passage in which Smith describes the narrator’s sorrow-cum-depression:

Clever trees. Know-it-all trees. I was tired of tress. I looked up at the sky. It was there, like it always was, like it always would be. It was regardless. It had no eyes for anything but itself. Cut me open with a knife the colour of that January sky, take a sliver of sky as sharp as cheesewire and split me down the centre from here at the top of my head, and what would be inside?

I went to the doctor and told him I needed help with mourning.

With Smith, things are often suggested, said sideways or sometimes not at all, leaving the reader to fill in the blanks, to grapple with what’s there, but not there. It is, indeed, no accident that haunting, imagination and loss are central themes of the story within the story of Smith’s book about writing.

About literature, she posits:

Great books are adaptable; they alter with us as we alter in life, they renew themselves as we change and re-read them at different times in our lives … they allow for our mutability, are ready for us at all times … will hold us at all our different ages like it held all the people before us and will hold all the people after us, in an elasticity and with a generosity that allows for all our comings and goings.

The narrator’s re-reading of Oliver Twist is illustrative. The same text, re-read, offers entirely new insights to support and inform a change in time, in circumstances and in life. Refracted through a different crystal—different eyes, different life—the text, as with all great books, will adapt.

Smith’s own book invites a re-reading, too. Its density and its originality, its simultaneous playfulness and seriousness, mean that it cannot be read through and consumed satisfactorily just once. The book serves as a showcase of Smith’s experimental style—playing with words, form and temporality—while excavating some of the aesthetic and literary influences that inform her work. Elements of the book seem autobiographical. It is tempting to read both central characters—the deceased and the bereaved—as voices of Smith herself and to imagine the setting of the book as her own home in Cambridge.

Artful will certainly be of interest to fans and readers of Ali Smith who wish to gain insight into her influences, sensibilities and sentiments—and it is certainly for this reason that I was drawn to the book. Furthermore, fiction writers, avid readers and students of literature should enjoy the fusing of literary musings with Smith’s unique brand of fiction—although it must be acknowledged that the book’s dense and sometimes academic style might challenge or vex some readers. However, as a work with many facets and entry points, there is surely something for everyone in Artful. Like the Artful Dodger himself, it is a work of possibility and plurality, and Smith—playing as always with her words—reminds us of that: ‘I liked how when [Oliver] meets ‘the Artful’, the book really comes alive, almost because he begins to understand about colourful language, and I liked how Dickens called the Dodger all his names, the Artful, the Dodger, the Artful Dodger, Jack Dawkins, Mr John Dawkins, like he was a work of shifting possibility.’ Artful is precisely that.

Luna Dolezal is a lecturer in medical humanities and philosophy at the University of Exeter. She is author of the book The Body and Shame: Phenomenology Feminism and the Socially Shaped Body.