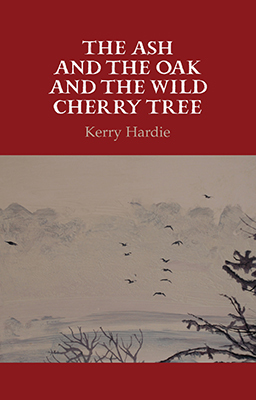 The Ash and the Oak and the Wild Cherry Tree / Fireflies

In ‘Sixty’, the first poem of her new collection, Kerry Hardie sets the tone: ruminative, plaintive, a considered gravitas to every line:

Everyone is slowly going home.
The shadow of the pine
lies stretched and sprawled across the trodden sands.
The waterline creeps close.

There is a kind of cinematic slow-motion to her ease with the dimming of time—a poet coming to terms with the fragilities of the world and our lives in it.I don’t hear the voice of one who recoils from the reality of this approaching stage in her life or is troubled by it, but one who is reconciled and clear-eyed.

It is poetry of shared intimacies, of the solemn note, as well as of the harmonies and discord between body and soul. Intimate daily experience and private grief permeate this haunting collection in which the author at times seems poised in a state of stasis:

Sometimes these days I fold my hands and sit quietly,
a good child.

Hardie’s work is a poetry of disciplined compression and deep inquiry into her own experiences and into the world around her—she could indeed be ‘one of those Zen solitaries / walking the earth, making poems…’, as she describes herself in one poem.

That depth is accompanied by clarity, as well as an insightful awareness of the cyclical nature of life; there is a no-nonsense candour to her probing of the heart, mind and spirit. In ‘Waning’, another poem dealing with the ineluctable passage of time, she tells us that:

And in the same poem there is regretful understanding that it is ‘… hard to trust life. / All that I love is alive and already dying.’

In similar mood, ‘The Satin Gown’ has her contemplating the ‘quiet hours of passage’ in a marriage house, where the ‘torn gown hangs there on the wooden page’—an emblem of how transitory and ephemeral all things are.

Landscape is a strong presence in her work and Hardie’s is a truly devoted attention to the landscape, a vivid delight and humane interest in the natural world. Her garden, too, seems to stimulate her poetry, providing some of its most telling visual details: in ‘Protecting the Buds’, a poem about safeguarding young apple trees from the ‘fierce intentions’ of pillaging birds, she observes:

‘….Winter, half turning,
waited on spring toiling after.
The moist air doused thought,
the bullfinches sat in the thorn hedge, waiting.’

She is, however, as attuned to the domestic interior—that black satin gown on the back of a door—as she is to the ‘hawk’s plunge through the August dusk / and the rabbit’s blooded scream’ or the ‘smell of cattle on the wind’ or ‘spring’s green sting’ (a beautiful phrase).

The discipline of tight form and simple elegance gives poems such as ‘Frida Kahlo’ their immediacy and force. While Yeats said that ‘Men improve with the years’, in ‘Sixty’, Hardie notes ‘the hesitant note in his gait/ Where once there was ease and strut’.

The word parable is one that I recall being once used to describe Hardie’s poems—it seems an apposite one. These are poems written at a meditative distance; she is a poet of great stillness, the cool gaze, recognising how the sea takes the edge off the land or how:

All roadsides in the world are unmarked graves
For those that strife or famine dispossessed.

Hardie is at heart a pastoralist but an uncompromising one who knows what lurks in the shadowlands, and these new poems further underscore that quality. She carries a deep sense of the locale, the rural landscape, out of which she writes. The mood of earlier work—measured and serene—is sustained here but with the added weight of those intimations of time moving on; her landscapes bear evidence of ‘the first frost of autumn’ or ‘the gnaw of winter’.

There is a poem of Robert Frost’s about going out to clear the pasture in spring, in which he says to the reader, ‘You come too’—but I think in Hardie’s case she wants to be afforded the kind of solitude that deepens the experience, and the result of that is a far richer poem and a richer reward for the reader.

Hardie’s lyric voice and its bracing power results in poems that are as supple as the named trees in her title poem, ‘The Ash and the Oak and the Wild Cherry Tree’, in which those trees are ‘telling those tales about silence/how it comes when the leaves are gone’—but the poet instead needs the trees ‘to tell that other story, / the one that’s murmurous with wind and leaves’.

Despite the sense of ennui perceptible in many of the poems, there is an overall life-affirming quality throughout. In a short poem in a previous collection, Kerry Hardie concluded that ‘that there is nothing to do in the world except live in it’. Her poems suggest that she does this admirably.

Frank Ormsby is another poet with an understated and unfaltering command of the language of restraint, and in the chorus of poetic voices from the North of Ireland, he might be said to be the quiet one, an almost reticent or reserved voice. It is a characteristic that adds to the attractions of his work—which is not to say he stands in some kind of isolation.

His various collections stack up to an impressive achievement, a singular and memorable body of work that maps out the longitudes and latitudes of the quotidian life, but never neglects wider historical perspective and contexts: historical resonances are never far from daily life in the North where Ormsby, a former editor of that literary stalwart, The Honest Ulsterman, has had a long career as a teacher.

Each of his collections has, for the most part, been superbly and daringly assembled, with many of the key poems based around a particular theme that acts as fulcrum to the book.

Fireflies, his most recent collection and which has not received the kind of attention it deserves, adheres to this template. In it, the poet absorbs and renders in a sequence of finely pitched lyrics aspects of the American landscape—in this instance Valhalla in Upstate New York and also regions of the Midwest. He delves into the American experience and idiosyncrasies in a way that, maybe only an outsider, one with perhaps an alien sensibility, can.

It should be added that, while Ormsby’s collections have had thematic threads running through them (the birth of his children, the American GIs who passed through the North on their way to the Second World War) each poem firmly stands on its own, and again that is the case with these American settings.

His work has always been approachable and direct. He has been an astute and insightful observer—and recorder—of life in the North, with a particularly focused gaze on the cityscape of Belfast. These gifts of tactful observance are brought into play in these latest mediations on place—‘The Kenisco Dam’, ‘Valhalla Journal’, ‘Washington’s Headquarters’, all of them powerfully evocative:

The Kenisco Dam is brimming with Catskill rains,
its blocked buttress braced to catch their drift
in valleys cleared years before we were born.
We skirt the edge and imagine the old town
nailed to the bottom, its weathercocks askew
in a climate they never expected…

The American landscape is—‘poetically’—a well-trodden one, and poets tackling it have giants on their shoulders; but the keen awareness of place that has been a hallmark of Ormsby’s Northern poems is evident here too.

That, and his unshowy expressive powers produce authentic results that capture ‘the tone of the landscape’. There is, too, an effortless and fluent shift between his various American settings: ‘a hamlet where half the suburbs are cemeteries’; places that have their ‘Italian nights, Irish nights, Polish nights’; and what he sees as the ‘storm lantern blur of towns on the Hudson’.

He is an exacting poet, but can be playful with his images—as in the title poem, ‘Fireflies’: ‘What should we make of fireflies, their quick flare/of promise and disappointment, their throwaway style?’ Or the wonderful homage to American beers, ‘At the Lazy Boy Saloon and Ale Bar’, with its profusion of witty touches: ‘We have travelled a hundred beer-miles past the doors/ of Nat’s, Joe’s, Mike’s, Pat’s, Al’s where tonight/ they are serving their full range: Bud and Bud Lite. / Neither beer-snobs nor connoisseurs, we roll the names/ like lines from favourite poems…’

In the book’s closing section, Ormsby returns to more familiar Northern terrain in ‘Blackbirds, North Circular Road’ and other poems, but cannot get away from America in his homage to the cowboy movie, ‘The Aluminium Box’. The box is one with precious celluloid cargo:

John Wayne is in it and Clint Walker and Joel McCrea
And Randolph Scott who never lost his hat,
Wichita and Dodge City and Boothill.

In ‘from City Journal’ the poet travels the Carr’s Glen Bus on the Cavehill Road and through Royal Avenue carrying the poems of Galway Kinnell ‘in the poetry pocket / of my black overcoat’.

Gerard Smyth has published nine collections of poetry, including A Song of Elsewhere ( Dedalus Press 2015) and The Yellow River, a collaboration with artist Sean McSweeney (Solstice Arts Centre, 2017 ). He is co-editor, with Pat Boran, of If Ever You Go: A Map of Dublin in Poetry and Song ( Dedalus Press ).

The Woman In The Port