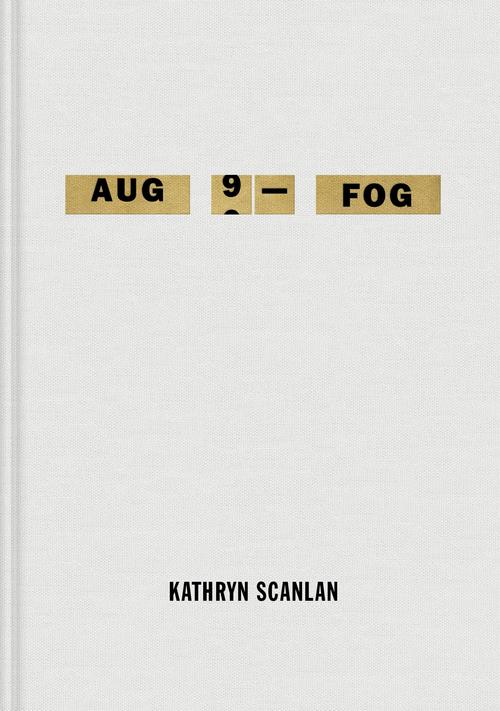 ‘The text that follows is drawn from a stranger’s diary.’ So opens Kathryn Scanlan’s Aug 9—Fog, a beguiling, hybrid book; part diary, part poem, part potent collage. Contained within its pale grey covers are two stories: Scanlan’s story – the story of how the book came to be created – and the story that unfolds in the pages of the diary.

Scanlan’s story is set out in a note at the start of the book. At an estate auction fifteen years ago she acquired the diary – its binding broken, its contents leaked on, bleeding, and in some parts entirely illegible. Scanlan read the diary obsessively, its daily record lodging itself in her imagination. The voice of the diarist became braided into her own thoughts. ‘In fact,’ she writes, ‘I have possessed this work so thoroughly that the diarist has ceased to be an entirely unique, autonomous other to me. I don’t picture her. I am her.’

Aug 9—Fog is a joint creation. Scanlan has edited and rearranged the original diary entries, investing the text with new meaning. This meaning is the book’s second story, a story which chronicles the joy and sadness experienced in a single household over five seasonal chapters (Winter, Spring, Summer, Autumn, and Winter). The setting is a town in Illinois, the narrator an unnamed 86 year old woman.

With the aid of Scanlan’s condensing edits, the prose rings like a clear, bright bell. ‘Terrible windy,’ the diarist writes, ‘everything loose is traveling.’ There are moments of humour (‘Ruth come wearing her new red wig. It will look good when we get used to her.’). But – as in all diaries, as in all lives – tragedy follows closely on the heels of comedy. When the diarist’s son-in-law dies, she records: ‘Such a lot of food sent in. Pies, cakes, salads, cookies. 2 canned hams.’ And then, poignantly, a few pages later: ‘My pep has left me.’

The book has the feel of a found poem, scrutinising life through the lens of a small, seemingly unremarkable diary. This practice – locating new significance in old texts – has informed the work of Mary Ruefle, who confers on Aug 9—Fog an enthusiastic, typewritten blurb. ‘If you ever wondered what life was about’, Ruefle writes,

if you ever felt yours was not ‘exciting’ enough, if you ever turned in vain to highbrow books that might tell you, then you should read this book, for the ordinary diaries of ordinary people will reassure you that yours is no different than anyone else’s—friends die, flowers come fast.

Friends die, flowers come fast. This is the core message of Aug 9—Fog, which funnels a startling array of emotions into its 110 pages. You can see why Ruefle enjoyed it; she has often taken found text as her tool for communicating powerful truths about life. See, for example, A Little White Shadow (2006), a book-length erasure poem in which Ruefle fashions a new story from the whited-out bones of an old one. But while Ruefle’s influence is evident, Aug 9—Fog doesn’t recall her work alone. TFor me, the book also bears clear affinity with the work of the found poet Susan Howe, particularly her collection That This, published in 2010.

Aug 9—Fog ends with a death; That This starts with one. As in many of Howe’s other books, it opens with an autobiographical note, rooting the pages ahead in a personal context – the context here being the death of Howe’s husband, the philosopher Peter Hare (‘as in Peter Rabbit’, he would often add). Hare died on a January night in 2008, at the close of their son’s wedding day. Created in the wake of Hare’s death, That This is a book about grief. It was conceived to be a kind of manual for mourning, in the tradition of Lewis’s A Grief Observed. ‘Sometimes,’ Howe admitted in an interview,

I would go to the computer and put down notes as one does in a diary. A couple of months later I printed out these original ramblings and began to think about forming them into a coherent narrative; one that might help others in the way that reading C.S. Lewis’s A Grief Observed helped me.

The main source for the book is unexpected (although unsurprising to those familiar with Howe’s work): the archive of the eighteenth century Edwards family, held in the Beinecke Library at Yale. Jonathan Edwards, the American theologian and philosopher, is a familiar character in Howe’s canon. Her Souls of the Labadie Tract (2007) opens with the image of Edwards travelling from parish to parish as part of his ministry. When ideas for sermons occurred to him he would pin pieces of paper to his clothing, forging an association between the idea and the place where the paper was pinned so he could remember it when he returned home. ‘I love to imagine this gaunt and solitary traveler covered in scraps,’ Howe writes, ‘riding through the woods and fields of Massachusetts and Connecticut.’

When Jonathan Edwards died suddenly in 1758, his wife Sarah wrote a letter to their daughter Esther. Howe quotes it in That This: ‘O My Very Dear Child. What shall I say? A holy and good God has covered us with a dark cloud.’ (‘Ice – ice – rainy & fog & freezing & all clouded over,’ Scanlan’s diarist writes.) Howe weaves Sarah’s experience with her own in this introductory essay, punctuating her description of the circumstances of Hare’s death with anecdotes about the Edwards family and an account of visiting their archive at the Beinecke. ‘Here objects to be copied according to the state-of-the-art North Light HID Copy Light system are prepared for reproduction,’ she writes of the process. (Scanlan records her method just as meticulously: ‘I typed out the sentences that caught my attention. Then, for ten years, off and on, I played with the sentences I’d pulled. I edited, arranged, and rearranged them into the composition you find here.’)

Howe made these copies into scraps, akin to the scraps of paper pinned to Edwards’s clothing as he rode, and pieced them together with scotch tape to create the book’s second section, a collage of text from the Edwards family archive. This section is abstract, an impression of past lives and beliefs. It is vintage Howe; over the many years of her writing career she has frequently sifted through old texts for emotionally resonant passages, searching, digging, quarrying. In a letter to the American writer Paul Metcalf, Howe writes: ‘It strikes me as odd that your address is Quarry Road and mine is New Quarry Road – because that’s what we both do; quarry.’ In 2015, she published a book of essays entitled The Quarry.

Scanlan is not Howe. Aug 9—Fog feels quieter, simpler, than That This, with its many erudite references and centuries-spanning scope. Howe explores the pain of mourning – her own pain paired with Sarah Edwards’s pain – while Scanlan assumes a more concealed, more anonymous, position. Howe’s input is clear (in some of her collages you can see the scotch tape), while Scanlan’s seams are invisible. But the tradition they are working in is the same. A quarrying tradition, which looks to the past, to domestic lives and everyday documents, for inspiration.

For both Howe and Scanlan, the relationship with the quarried source is collaborative; they draw on and enhance themes articulated in the original text. As Scanlan notes in a piece for Granta (appropriately mining quotations from others), ‘Christine Schutt – paraphrasing Gordon Lish – says, “Your obligation is to know your objects and to steadily, inexorably darken and deepen them.’’’ Aug 9—Fog certainly contains elements of darkness and depth. Or should that be ‘debth’ – a word Howe borrowed from Finnegans Wake for the title of her latest collection (Debths (2017)), a word which holds within it ‘depth’, ‘debt’, and even ‘death’.

The Paris Review recently published an essay by Scanlan, which reads as a coda to Aug 9—Fog. In this essay, she explains how she sought to find out more about the diarist. She visited FindaGrave.com, where digital memorials are erected and members of the site – ‘Gravers’ – leave comments and ‘flowers’. There, Scanlan read about the deaths of the diarist’s relatives. She discovered that the diarist herself died four years after making her final diary entry. ‘The project of Aug 9—Fog has always been about death,’ Scanlan writes, ‘yet that didn’t prepare me for the somber, sobering encounter with the diarist’s mortality.’

Friends die, (virtual) flowers come fast. Aug 9—Fog bridges the gap between generations; its central relationship is one created across decades through an intimate act of collaboration. It is a fascinating book, at once philosophical and tender, addressing themes of authorship and legacy, life, death, depth, debt. Following Howe’s illustrious example, it boldly quarries the past, answering vital questions about the present in doing so.

Xenobe Purvis is a writer and literary researcher, currently assisting in the preparation of a volume of Christopher Isherwood’s selected letters.