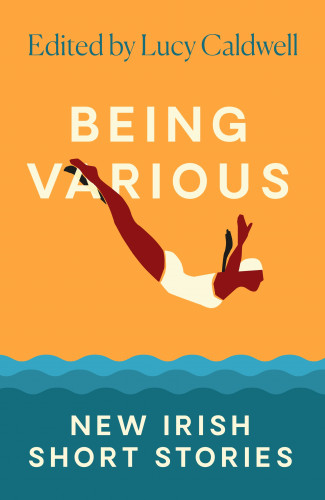 Being Various: New Irish Short Stories, an anthology which aims to showcase the best and brightest of what editor Lucy Caldwell rightfully calls a ‘golden age’ of Irish writing, offers an impressive array of stories by writers for whom questions of identity and belonging – what ‘Irishness’ or ‘Irish writing’ might mean – are complexly open.

The stories in Being Various, all newly commissioned by Caldwell, are thoroughly contemporary and yet, for the most part, rarely feel newfangled. Gaining  purchase on the contemporary is notoriously elusive, its seductive proximity often betrayed by the blurriness of the worm’s-eye view. Thanks to Caldwell’s curation, though, the effect in this collection is one of freshness and vitality, as well as urgency. Caldwell amplifies voices whose narratives have been for too long muffled, and so provides a portrait of Ireland in all its modern multiplicity. In a welcome redressal of balance, two-thirds of the contributors to Being Various are women, and one third are Northern Irish, a decision which Caldwell directly relates to the Good Friday Agreement’s ongoing imperilment. This being said, the collection is far from Panglossian: collectively, these stories portray a society in flux, unsure of itself, and far from immune to the fissures tearing our neighbours apart.

Exemplary in this regard is Louise O’Neill’s ‘Legends’, which appears early in the anthology. Ostensibly a portrait of rural anomie, O’Neill’s story is focused around Alannah, who has recently left her hometown to pursue a degree in Galway. She’s afflicted by an emotional tug-of-war that’s recognisably gendered; she’s damned if she does and damned if she doesn’t, caught in a vice grip of inbetweenness: seen as either too chaste or too promiscuous; too ambitious or not enough; wary of her roots and yet somehow a quisling of the ‘big smoke.’ Alannah’s empowerment is resented by various wannabe Lotharios whose power, they realise deep down, is pitifully local and inevitably transient, the fruit of sporting prowess and small-town braggadocio. In their own way, they’re just as trapped as Alannah by ‘the village’s invisible limits.’ They lash out at her and her incipient feminism if only to cushion their own feelings of inadequacy. Alannah’s most trying struggle with self-image, however, is represented by her eating disorder, an affliction exacerbated by her relationship with her mother—an overbearing, superego-like figure whose only purpose seems to be to admonish her daughter and her apparent transgressions. The gender dynamics in ‘Legends’ are redolent of a more global reaction against women’s growing autonomy in society, an evolution which acquired powerful symbolic recognition following last year’s decision to repeal the Eighth Amendment.

Unsurprisingly, bodily autonomy is a feature of a number of stories in Being Various. Elske Rahill’s ‘Stretch Marks’, which directly addresses questions surrounding last year’s referendum, is a searingly unsentimental evocation of pregnancy’s dark underbelly. Rahill’s prose is affecting to the point of being almost sickening: its visceral convolutions exact a kind of revenge on the reader’s unearned comforts, and seem calibrated to work against a squeamish tendency to dematerialise childbearing, as if it were something tidy and amenable, over which those pregnant have effortless control.

A wriggle. Something full and moist; something juicy turning and whirring there under the bend of her big toe… For the rest of her pregnancy that sensation will keep coming back to her – on the toilet, in the bath, peeling potatoes – the wings trilling on her just-washed skin and the petrol gleam of its body as it hobbled off, vibrating with ignominy.

Prose like this will seem heavily indebted – too much so, perhaps – to Julia Kristeva, a theorist of both maternity and and what she calls ‘the abject’: that which is both disgusting and alluring, integral to us and yet wholly other, a writhing inventory of which Rahill is happy to provide. ‘Frills of maggot eggs’ border her bin; ‘dirt rolls up under her nails’; her vomit is ‘neon bile.’ Most impressive, though, is how she treats the theme of shame. ‘Wouldn’t you be ashamed?’ is a refrain repeated in the story like a curse, only the protagonist Donna’s own shame is subtly displaced away from her and onto a guilty Ireland, whose ignominious history, symbolised in the story by the haunting presence of the Magdalene laundries, remains a legitimate source of national and collective shame.

From an entirely different angle, Melatu Uche Okerie’s ‘Brownlady12345’ concerns a more contemporary, if no less deplorable, avatar of state-sanctioned punishment: the direct provision centre. Okerie’s story is an indictment of this system that focuses less on its most egregious and obvious horrors – how it is de facto a form of imprisonment – and more on the quotidian humiliations it inflicts. Joseph, who is living in a direct provision hostel, is eager to date, and his avenue of choice, like for many today, is online. However pervasive, most of us still like the protective cloak of clandestinity when logging on to Tinder. Joseph, though, is denied this, and forced to live out his life in public. An impression of vulnerability and exposure – carefully rendered by Okerie through Joseph’s telling silences, his trembling hands and pounding heart, the naivety with which he constructs his dating profile – is brought to a crescendo when Deirdre, who has come to Joseph’s hostel, leaves abruptly. This dénouement feels both depressingly permanent and frustratingly open and, whether inadvertent or not, gestures towards how direct provision is apt to feel more like a limbo than a purgatory. (A majority of those consigned to it spend not the purported maximum of six months, but five years or more in the system.)

Other parts of the anthology play out on more familiar terrain. Eimear McBride’s ‘The Adminicle Exists’, which reprises the contemporary modernism of her award-winning A Girl is a Half-Formed Thing, is another display of formal daring. Blending Beckett’s paucity of means with Joyce’s lexical exuberance, McBride manages to offer abundance where it shouldn’t be possible. With ‘Who’s-Dead McCarthy’, Kevin Barry demonstrates once again his prodigious ability to ventriloquise a distinctly Irish rogue-speak. Especially memorable is his description of the Stygian protagonist Con McCarthy as resembling ‘a figure from a Jack B. Yeats painting or an old Russian novel.’ ‘Colour and Light’, which recently featured in the New Yorker, is yet another deftly executed piece of writing from Sally Rooney. With its economy of architecture and compression of form, Rooney offers realism that has actual verisimilitude: the story leaves room for the unexpected, the contingent. Because reality rarely feels inevitable, stories purporting to be ‘realistic’ shouldn’t feel so.

However, Nicole Flattery’s relentlessly strange ‘Feather’ is the highlight to be savoured. The tone of this story shares much with those included in her recent collection, Show Them A Good Time. There are hints of lurking dystopia — ‘it had been a long time since I had undressed in front of anyone but the wardens’ — that nudge us to be leery of any expectations of normalcy; we learn that Simon, whom the narrator has brought home to meet her parents, is actually a chicken! Flattery gets away with such levels of surreality because her narrating voice is so compelling: with her penchant for the passive, the narrator’s affectless, self-alienated musings are hilarious in their sheer oddball honesty — ‘all of it painted an unfavourable picture of me. It made me look spoiled, which was just one of a number of accusations thrown in my direction.’ At the story’s end, the comforts of resolution or closure are appropriately withheld.

Flattery’s story is an especially obvious example of fiction that begets more questions than it answers. This, of course, is Caldwell’s express intention with Being Various. These are stories that healthily interpolate Irish fiction with nothing short of a new grammar. Many of these stories draw their themes from Ireland’s polemical buzz, albeit in a way that rarely feels didactic, or the stuff of think-piece pabulum. If anything, they demonstrate once again how fiction might serve to defy the lazily boilerplate, and compel us to listen rather than assert.

Luke Warde is a critic and researcher. He is currently the Literary Editor at Totally Dublin, and he is writing a doctoral thesis on the rhetoric of provocation in modern and contemporary French literature.