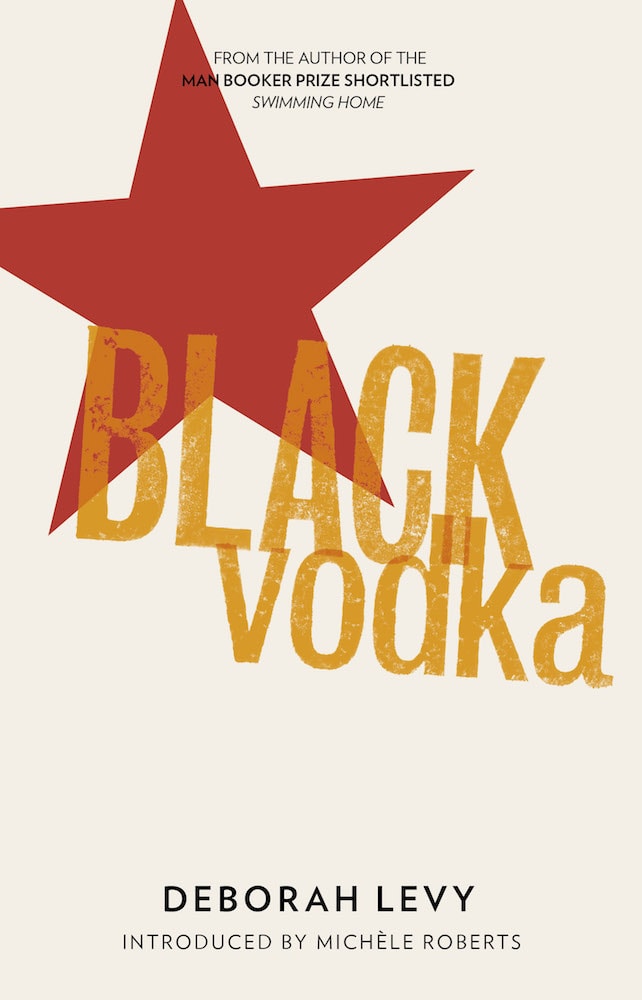 In an online interview with Granta magazine, Deborah Levy reads a passage from her latest novel, Swimming Home. On the three occasions that she slips up, she does not simply correct herself and continue from there, as most of us surely would. Instead she returns to the beginning of the sentence or paragraph, proceeding slowly from the top, and it becomes clear to all that we are listening to a writer who places a poet’s value on the rhythm of her prose. It asks to be read accordingly. To take just one example, from the title story of her new collection, Black Vodka, where the narrator says: ‘I muttered something about being summoned to an emergency and left quickly before Tom could point out that the emergency was me.’ Here we have a dialectically structured sentence, whose thesis ends extends to the word ‘and’, on which the line pivots before starting into its antithesis. The two sides, which each run to seventeen syllables, are sewn together by both repetition (‘emergency’/ ‘emergency’) and rhyme (‘emergency’/‘me’).

Deborah Levy has apparently been writing sentences this way since 1989, but her name was not widely known until she was shortlisted for the 2012 Booker Prize for Swimming Home, a short elliptical novel for which the sentence examined above could easily serve as epigraph. The novel opens on a Saturday afternoon in the south of France. Joe Jacobs, a famous poet, is sitting by the pool with his wife (Isabel), his daughter (Nina), and another couple (Mitchell, Laura) whom Isabel has invited. They notice a body floating near the deep end of the pool. Isabel dives in to help. When the body emerges safe and sound, they find that it does not belong to a bear, as they’d initially worried. Instead it belongs to Kitty Finch, the perfectly naked young woman whose ‘breasts were surprisingly full and round for someone so thin.’ Right from the beginning, we find Eros and Thanatos swimming in the same pool again. Kitty introduces herself and explains: ‘I thought I was staying here from this Saturday for a fortnight. But the caretaker…’ Isabel invites her to stay, and from there this novel of high symbolic charge bolts forth.

Kitty is by far the most interesting character in the book—a young woman onto whom everyone, even Kitty, projects an image. With the plurality of her narrative identity in mind, it should be said that her introduction to the group was not quite as easy as I may have suggested. ‘What she actually said was I’m Kah Kah Kah and stammered on for ever until she got to Kitty Finch.’ Although Kitty will go on to be extremely forthright with many of the other characters, she continues to spend a lot of time ‘stammering and blushing’. As it turns out, she is a great admirer of Joe Jacob’s poetry. She is something of a poet herself, in fact. It is from one of her poems, which she forces Joe to read, that the novel takes its title. ‘The poem, ‘Swimming Home’, was mostly made up of etcs; he had counted seven of them in one half of the page alone. […] He was being asked to make something of it and what he made of it was that every etc concealed something that could not be said.’

This narrative of silence and stammering is threaded into every line in Swimming Home, as the book, borrowing again from Kitty’s poem, starts to fill up with its own ‘etcs’. It all recalls the Tropisms (1938) of Nathalie Sarraute—another writer for whom there is no border between poetry and prose—whose characters are always ‘jabbering half-expressed things, with a far-off look as though they were following inwardly some subtle, delicate sentiment that they seemed unable to convey.’ When Sarraute was asked why she chose the word ‘tropisms’ as the title of her first collection, the nouveau romaniste replied that it ‘came from the sciences, from biology, botany’. And so it seems quite appropriate that when Mitchell asks Kitty about her occupation, she replies: ‘I’m a botanist.’

Sarraute is by no means the first proponent of the nouveau roman to whom Levy has been compared. In his introduction to Swimming Home, Tom McCarthy mentions Levy’s name in relation to Alain Robbe-Grillet. Levy herself has drawn the same link elsewhere. In 1963, Robbe-Grillet wrote Towards a New Novel, a collection of essays in which he outlines the ideas and methods which he and other New Novelists had been working with since as early as Sarraute’s Tropisms. Calling time on the nineteenth-century novel of Balzac and Zola, he argued that the novel must be newly conceived. His own fiction—of which The Voyeur and Jealousy stand out—was described by Roland Barthes as ‘objective’, a term Barthes elaborated on by reference to its dictionary definition: ‘turned toward the object’.

It is a legend well-suited to Swimming Home, where Levy often seems intent on accumulating as many concrete nouns as possible just to see how they work together. ‘Nina wasn’t listening,’ she writes. ‘She had just seen a boy in silver shorts roller-skating down the esplanade with a bag of lemons tucked under his tanned arm.’ In Levy’s work, so much depends upon a bag of lemons. A still more striking (and literal) effort to set nouns together appears in ‘Cave Girl’, a story in Black Vodka, where the narrator states: ‘There’s been a pile-up on the motorway nearby. A furniture van collided with a baker’s truck. The drivers crawled out of their vehicles streaked in blood to find a load of chocolate éclairs and cream cakes splattered on leather sofas and office chairs.’

Long before the success of Swimming Home, Levy told a 2004 interviewer that, ‘what I don’t want to happen to me is that thing that happens to so many women—it’s as if we burst out of the birthday cake without context, history, or past with every book.’ With some of its stories dating back as far as 2001, Black Vodka might be seen as Levy’s attempt to contextualise her ascent from said birthday cake. It is an extremely strong collection, with each of its ten stories written in such high-concentrate prose as to reward not just several readings, but several ways of reading.

Black Vodka is an inexhaustible feast. Its richness can be ascribed in part to that style of weighted reticence we sense at work in Swimming Home. The recurring motifs and metaphors of the collection, which are each put down in such a way as to resist any singular interpretation, should also be considered instrumental. Levy records telephones, sirens and car alarms like others would record birdsong, while the grotesquely close attention she pays to wrists, thighs, skulls, bones, skin, meat, veins, blood and guts establishes an extremely rich, versatile symbolic code. Black Vodka sees Levy play surgeon, dermatologist and butcher all at once.

Above everything else, though, it is Levy’s characters that make Black Vodka so densely elusive. Their world is one of pretense, performance. The narrator of ‘Black Vodka’ works in advertising, for example. He has a hump on his back, which he covers with loose-fitting designer suits. Similarly, he observes that his boss, Tom, who ‘suffers from livid eczema on his wrists and hands’, has always worn jackets with extra-long sleeves. ‘For obvious reasons,’ the narrator says, ‘I am fascinated by how other people conceal their physical suffering.’ In ‘Cave Girl’, the narrator’s independently-minded sister, Cass, undergoes a sex change—not to become a man, but to become ‘another kind of woman’. She returns from the operation with long legs, blonde hair and blue eyes, and performs as the kind of woman generally considered preferable by patriarchy. ‘She doesn’t have opinions; she listens to what I have to say as if I am someone important. And when I tell her a joke, she laughs, shining her dimples in my direction.’ In ‘Stardust Nation’, Nick experiences traumatic memories of Tom’s childhood. He is eventually hospitalised as he unwittingly performs as a sort of surrogate analysand. After Nick’s recovery, Tom writes: ‘For a man who had so recently been deranged he gave the impression of being entirely normal. I too have spent much of my life perfecting this performance.’

Levy has studied and worked in theatre, and so she knows as well as anybody that performances can often be extremely truthful. And yet it is hard to see how a cast of so many performers could ever be considered totally reliable. Since we can’t quite trust them to be sincere—either with us or with themselves—we need to find other ways of understanding them. It is worth remembering now what Robbe-Grillet had to say about Barthes’ interpretation of his work: ‘When he uses the word “objective”, he does not mean impartial or neutral. In a microscope, there are two lenses, one turned toward the eye and another turned toward the object.’ In other words, Robbe-Grillet’s extremely thorough descriptions of space are intended to reveal as much about his narrators as the space itself. As they delineate an object, the object delineates them.

One of the things that the characters in Black Vodka keep noticing is the distant cries of telephones, sirens and car alarms. These signs of alarm are made to reflect back onto their witnesses. In other words, they have a great deal less to do with anyone ‘being summoned to an emergency’ than with pointing out that, for many here, ‘the emergency was me.’ For Levy, what takes place on an exterior narrative level is absolutely tied up with the internal lives of her characters. Although they work slightly differently, rashes and scabs serve as still more exterior, objective manifestations of inner turmoil. ‘He can live without champagne,’ writes Levy, ‘but he cannot live without his children; that is a grief he knows he cannot endure but he must endure and he knows his hands will itch for ever.’ The fact that so many of the characters here suffer from persistent rashes (eczema, mostly) gives one further reason to suspect that, beneath the calm, measured delivery of its prose, the cast of Black Vodka are just barely keeping it together for the camera. The main attraction for us, then, is the suspense in knowing that at any minute the whole show might come down.

‘Do I Dare Disturb The Universe?’