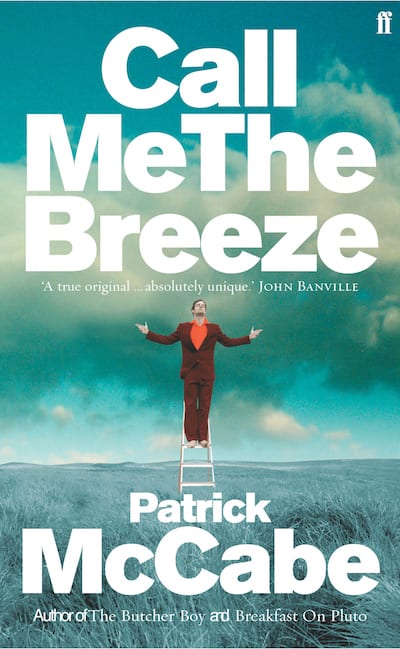 Call Me The Breeze

This bizarre, careening mishmash of a novel tells the story of Joseph (Joey) Mary Tallon, an idealistic fantasist and caravan-dwelling native of the imaginary border-town Scotsfield, who begins to ‘discover’ his true sensitive self while doing time for abduction in Mountjoy. The first third of the novel is partly made up of Joey’s increasingly wordy Jail Journal, sub-titled Diary of a Kip, which, beginning shortly after his imprisonment in 1976, charts the early stages of his intellectualisation and his bid for self-improvement and catharsis through an interest in theatre and screenwriting. Joey’s life seems prospectless when he finally returns to the halting site during the economic boom. Fortunately, the friendly parish cleric Fr. Connolly helps him become re-established in the locality by fixing him up with a position as teacher of film-making at the local community college.

This is Joey’s opportunity to escape the chaotic twilight world of his past by realising himself as a credible, creative, authentic person, something along the lines of Hermann Hesse’s protagonist in Stepppenwolf, a work he came to admire behind bars. However, certain associations and obsessions threaten to hold Joey back in his aim to better himself. Not the least of these includes what he knows about a number of ex-nationalist vigilantes, now respectable big shots in the community. Then there is his pretty peculiar attachment to a blow-up doll he names Mona after the girl his father made pregnant and promptly dumped when Joey was a child. On top of this, Mona is something of a surrogate for the Californian Joni Mitchell lookalike who nicknamed him ‘the Breeze’ (exactly why is never made clear), whose rescue from the scene of a sectarian bombing was construed as kidnap and led to Joey being sent down all those years before.

The book is set during a time when Ireland was starting to become more and more affected by America’s overwhelming cult of the fetishised pop idol figure: this is reflected in Joey’s reverence not only for advocates of selfexploration and authenticity like Hesse-and Bono-but also for such luminaries of frustrated violence as the imaginary Travis Bickle and the almost legendary Charles Manson, whom he refers to affectionately as ‘Charlie’. It’s the way these various figures symbolize complementary opposites that intrigues Joey Tallon:

The problem with Charlie [Manson] was that he made the wrong choices. He could have been Jesus, but instead became the devil. He could have been the Buddha, but chose to become Hitler. There were two gardens on earth, and I knew that now. In one there were flowers, both tender and perfumed, and in the other there was nothing but evil…

The importance of recognising and harmonising the damaging and beneficial forces in ourselves underpins the book thematically; another theme is art’s potential as an ‘agent’ for ‘absolution’ – as Joey phrases it when he refers to the incendiary short movie he makes with his students from his own script based on the past paramilitary doings of the town’s current bigwigs.

The foundation of this latter theme in the book is the conflict between corrosion and growth, illustrated in the parallel between Scotsfield’s embracing the dreary homogeny of American-led pop culture and consumerism, and the sterility of Joey’s emotional and sexual life which he so blithely accepts-and which gives ironic thrust to his prison-learned concern for self-discipline and artistic and spiritual awakening. Worthy as these themes are, it demands more than the book’s ‘discursive ramblings’ (to use the words Joey’s creator self-consciously has him use) that make up the greater part of it, to really do them justice.

One of the more interesting things about the book is the way Joey, all the time supposing himselfon the road to ‘self-improvement,’ gradually alienates or withdraws from his mentors and friends as the deadly residues of a toxic past seep into his seemingly burgeoning present-day life. There are rare moments when the horror implicit in the slow, ever-resistant sensing of one’s doomed condition as a chronic failure is powerfully captured-it is this psychological realm that gets McCabe’s imagination operating at its most subtle and suggestive. And he is skilful at showing how violence and self-destructiveness attract, modulate into, and generate one another. However, when Joey, in these words, vents his take on the inevitable selectivity of the outward process of redemption:

What about all the others who had perpetrated deeds of an equally heinous nature? Were a selected band of unfortunates to facilitate their convenient exculpation by shouldering all the blame?

it sounds like Francie Brady has grown from the boy who butchers condescending neighbours into the sexual invert who butchers language.

Still, the irony and pitifulness in Joey’s occasional intellectual pretensions is plain and, seen alongside his increasingly apparent delusion and paranoia, makes up a would-be-interesting portrait of a mind in the process of disintegration while the basic underlying personality hopelessly strives for some kind of wholeness. But despite McCabe’s creative expertise in this area of the human psyche, the whole narrative is itself too disintegrated ever to really come off – and is not helped by the too-naturalistic, facile tone of the prose.

The credo of Steppenwolf, with its manifestly multi-layered central individual, and a metaphorical extract from Gogol about the seasons’ transitions are cited throughout to shore up Joey’s idealistic preoccupation with getting to grips with the onion-like nature of one’s being; but these allusions serve merely to highlight the terminally unmoored, unstable quality of the surrounding text, and the hopeless one-dimensionality of Joey and his friends. Altogether, the book has the rickety, non-committal feel of something that hopes eventually to hit its stride, before it gives up, shrugs, and shambles on resignedly, and a little cynically, straight for the stale, obligatory slide into unwarranted physical violence. Like its central character, the book doesn’t really know what to make of itself, and ultimately decides trying to figure itself out is just too much heartbreaking effort.

Toward the end Joey, believing himself to be inspired, at one point declares: ‘It was a sensation you imagined took hold of authors when you heard them announcing that the Muse had struck.’ Going on the evidence here, that level of imaginative endeavour would appear to cost our anti-hero – and, increasingly, his author – some considerable strain.

Michael Wynne has had fiction anthologised in Ireland, Britain, Canada, and the USA. His reviews have appeared in The Examiner, Magill, and The Harvard Review. He is currently reading Philosophy at Trinity College, Dublin.