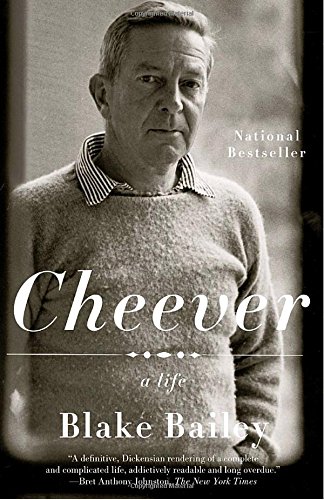 JOHN UPDIKE’S LAST ACT AS A New Yorker writer was to review this compendious biography of John Cheever, his colleague of several decades in a golden age for American fiction. His review may have been soured by the fact that he was dying of the same disease that killed Cheever in 1982. It may also have been soured by the several reminders in Blake Bailey’s book that Cheever, at whose funeral he gave the eulogy, was prone to bitch about him mightily. At any rate, Updike seems not to have liked the book much, and questioned the worth of trawling through such an unhappy life, calling it a ‘dispiriting read.’

This is a not inaccurate description of Blake Bailey’s new life of John Cheever. It is especially sad that, in its 700 pages, the book nowhere documents the most notable fact about America’s first laureate of the suburbs—his love of writing, which shines from every page of his fiction. Blake Bailey, as he did in his previous life of Richard Yates, details Cheever’s career in a strict chronology, eschewing a more thematic or analytical approach, and in the process allows several aspects of Cheever’s life and work to fall between the cracks. That his approach was more successful in his life of Richard Yates could be put down to two things—that Yates is a more straightforward and accessible character than Cheever and that, unlike Cheever, Yates did not keep a journal. At his death, Cheever’s journal amounted to 4,000 pages, a fraction of which has been published in book form. Bailey is one of only ten people to have read the journal in its entirety, and there is a sense that he was gradually swallowed by the document.

Cheever and Yates are comparable figures in many ways although, virtual contemporaries, they seem never actually to have met. They shared an addiction to alcohol and a fascination with loneliness, particularly their own. Both skipped college and remained insecure about it; both loved Fitzgerald and Madame Bovary, although the Flaubert connection is more evident in Yates than it is in Cheever; both endured childhoods disrupted by poverty and scarred by selfish, unloving parents; and both featured in episodes of Seinfeld—although Cheever was singled out only because, as Larry David put it, he was a ‘writer who was gay.’

Cheever’s bisexuality is one of the themes that Blake Bailey allows to fall through the cracks, not because his homosexual yearnings and their invariably painful expression are not referred to—they are referred to constantly—but because they are never put into any context. After almost 300 pages we are told, briefly, that in Cheever’s home state of Massachusetts sodomy often resulted in ‘lengthy prison terms.’ Given Cheever’s intense fear of the pariah status he felt his homosexuality would earn him if he gave it full rein, this real, legal threat has more relevance than Bailey grants it. Bailey’s refusal to connect Cheever with other writers who repressed their sexuality, and with similarly harmful results—Capote in particular—is also odd. Another line of inquiry that the biographer declines to follow has more to do with current intellectual fashion. Bailey displays an almost total lack of interest in Cheever’s Christianity, which surfaces frequently in his fiction and is key to any understanding of Falconer, his late masterpiece. If Cheever was a gay writer, he was also a Christian writer, albeit one who rarely used the word ‘God’. Even on his last appearance on The Dick Cavett Show he talked of his love of the creed.

For all this, Bailey’s book is attractively written and ultimately readable. In an interview after the appearance of the Yates biography, Bailey named Eminent Victorians as one of his favourite works, and his style has some of Strachey’s waspishness. Of Cheever’s frequent correspondent, Frederick Exley, he says: ‘Three years later Exley would stun almost every soul in Watertown by producing his quasifictional masterpiece, A Fan’s Notes, but meanwhile he was just another drunken lunatic with delusions of grandeur, and Cheever happily kept writing him all the same.’ There are many such witty encapsulations in the course of Cheever, but it is fortunate that Bailey’s prose is so readable, because the subject matter is inevitably repetitious. Like Yates, Cheever was a man of great inaction, with a drinker’s fear of change; he never did anything, apart from write, drink and occasionally skate on a frozen pond. His friendships with writers such as William Maxwell and Saul Bellow and relationships with wife and children never go far enough to give the reader of his life a satisfying sense of release or closure. His trips to Russia, where he was welcomed as the ‘American Chekhov,’ and his occasional visits to Italy, were exceptions to the rule. Usually, he is to be found sitting in a room on the East Coast, huddled over a typewriter, worrying about his sexual misdemeanours, as he saw them, and the nearness of the next glass of gin. While the repetitiousness of his life becomes strangely beautiful, mesmerising and even edifying when conveyed in Cheever’s own words in his published Journals, as Updike hinted there is a limit to its usefulness when given to us in all its bloodless detail by a biographer.

It will be interesting to see whether this big book on Cheever’s life has anything like the same effect on his reputation as Bailey’s generally more satisfying take on Richard Yates, who has since its publication become almost a household name. When they were alive, Cheever was by far the more successful and, arguably, the luckier writer. He published 119 stories in the New Yorker, while Yates published none. Now the positions are very much reversed, with Revolutionary Road the sixties novel of choice for the contemporary commuter and Cheever’s reputation and sales in seemingly a permanent slump. It is unlikely that Blake Bailey’s book will alter this balance of popularity. For one thing, none of Cheever’s novels achieves the kind of sustained excellence that Yates achieved in Revolutionary Road or Easter Parade. For all that they are beautifully written, in a style whose cadence is unlike anyone else’s, and however much they bring us America in all its beauty and squalor, Cheever’s novels are episodic affairs. Falconer is much the best of them—but it remains an astonishing feat, a 200-page short story.

On the other hand, Cheever’s short fiction is plentiful, varied and, most importantly, risk-taking in a way that Yates’s is not. While Yates had a deep aversion to describing anything that could not be done by an average man on an average day, within the ordinary constraints of time, Cheever did not recognise those limitations. In ‘The Swimmer’, for example, a man sees high summer turn to autumn in the course of an afternoon. Cheever’s characters are allowed epiphanies and dramatic reversals of fate; they are allowed as much water, air and light as they can handle, and it is up to them what they make of it. As Updike remarks in his review, Cheever’s life may not have brought him much pleasure, but his writing is full of it—and not only pleasure but joy. Blake Bailey’s biography fails to do justice to the sacred and profane swagger of that writing or its sheer comedy, and it may be Cheever’s lot to remain exclusive.

Sons At My Feet