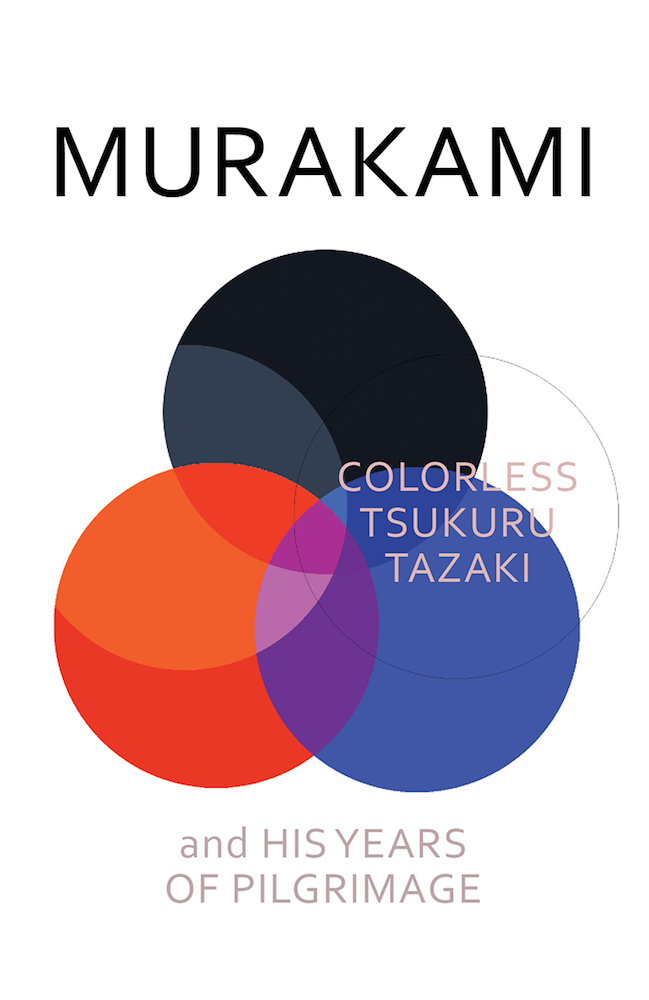 Colorless Tsukuru Tazaki and His Years of Pilgrimage / Triangle

I don’t know whose idea Haruki Murakami was, but it seems to be paying off. When his thirteenth novel came out in Japan last year, it sold a million copies in two weeks. There were queues at midnight, reviews by morning. It’s a weird phenomenon, one that you sense this book’s protagonist would have little time for. Tsukuru Tazaki is another of Murakami’s ascetic types. He lives in a studio apartment, takes his job seriously, swims routinely, never travels. He entertains few bad habits, fewer guests, and for the longest time he was happy to wear any old digital watch. When his father died, Tsukuru inherited his beautiful antique Heuer. He enjoys ‘the weight and heft of it‘, he enjoys its ‘mechanical whir‘. This is a novel about the passage of time.

On his fourth date with Sara, Tsukuru opens up about his childhood. In high school he had been part of a close-knit group of friends—two girls, three boys, five thoroughly wholesome archetypes. They’d to do everything together—hiking, fishing, studying, the works—and they wouldn’t hang out in twos or threes lest it somehow destroy their special chemistry. Needless to say, nobody fucked; but Tsukuru got fucked over. One day his friend Ao told him that none of the group ever wanted to see him again. He offered no explanation and sixteen years later Tsukuru remains none the wiser. This abandonment was traumatic. Tsukuru turned in on himself, allowing death to ‘envelop him in its embrace for nearly half a year’. By the time he came through it, he had hardened in such a way that even his physical appearance had changed.

Despite his success at home and abroad, Murakami claims to be the outcast of Japanese literature. Posturing notwithstanding, it’s true that his work is—or has been—qualitatively different to the work of other Japanese writers. Taking Raymonds Chandler and Carver as models, Murakami created a form of Japanese that mimics the structures of everyday American speech. Starting out, he used to write first drafts in English, then translate them into Japanese. His early work is deadpan, hard-boiled, heavily ironised. For Otsuku Eishi, Murakami’s writing is ‘like American literature translated into Japanese’.

In the hardened post-traumatic figure of Tsukuru, who is at one point described in explicitly linguistic terms, we find the embodiment of Murakami’s distant and unhomely prose. ‘Slowly he grew used to this new self. It was like acquiring a new language, memorising the grammar.’ Yet the world remains at one remove from him. ‘Colors he’d once seen appeared completely different, as if they’d been covered by a special filter.’ Sara spots it too. She says that when they slept together, ‘it felt like you were somewhere else’. She refuses to keep seeing him until he discovers why his friends abandoned him, attributing his distant performance in bed to a psychological ‘blockage’ caused by their unexplained rejection of him. She locates for him his former friends, one of whom is dead. Then she plans the three legs of his pilgrimage, helps him to renew his passport and puts him in touch with local car rental agents. She does an awful lot for such a new friend, and forces him to do still more.

It is difficult to overstate the amount of plot in this novel. One turns page after page of storyline only to arrive at more storyline. It’s awful, it takes ages, and its revelations ruin whatever was interesting about the story to start with. An unease with the unknown has become characteristic of Murakami’s later period, where what had once been incoherent is now, in Christopher Tayler’s terms, ‘coherently incoherent’. The deadpan is gone too, replaced by a misty weatherman-lyricism. These days even office furniture puts his narrators in mind of ‘a fine rain falling under a midnight sun’. At last, Tsukuru understands that he is not a bad person. He has become ‘unblocked’, less hardened, more in touch with his emotions. His story is an allegory of the journey made by the prose in which it is told. It is not a happy story.

Neither is Triangle, though it is in parts more interesting. On a sparsely lit street one evening, its first-person narrator puts Hikoro in a taxi. He is happy to get rid of her. Otsuku is a former drug addict and he sleeps around. He has no steady job, living instead on the dollar of the husbands of the women who come and go. He is the mirror image of Tsukuru Tazaki—at heart they are both loners.

After seeing Hikoro off, Otsuku takes a walk down some unfamiliar streets and ends up bumping into Sugimoto, a shady character from his past who convinces him to visit a man about a job. The pair make their way through a dark octagonal house until they finally come face-to-face with Koyama. Though his ‘cold, reptilian eyes’ certainly suggest it, for now it’s not clear that Koyama is a bad guy. He persuades Otsuku to watch a film.

Triangle is Hisaki Matsuura’s first novel to be translated into English. Though there are no conspicuous wristwatches here, it is for that no less a novel about the passage, or non-passage, of time. Koyama comes right out and says it: ‘What is your concept of time?’ He doesn’t wait around for an answer either, instead entering into what Otsuku describes as a ‘meandering, unbalanced monologue’ in which he rubbishes linear and circular concepts of time in favour of his own theory of infinite ‘nows‘ all existing within each ‘now‘. Triangle is a novel with a radically destabilised chronology; everything that happens, happens at once. Memory and premonition are synonymous, and the line dividing subject and object is blurred at best. This is a mixed blessing in narrative terms. It affords the author so many opportunities to pull the rug from under us that soon we simply step aside and watch a rug whisked around to no effect.

The film Otsuku watches is described in detail. ‘The structure was simple— scenes showing the habits of various insects inter-spliced with scenes of explicit pornography.’ What’s most important here is the girl. Her name is Tomoe, and she provides the novel not only with its most significant character, a mantis-like figure whose ‘syrupy cries of sex’ echo through Otsuku’s mind, but also its structuring principle. We learn early on that Koyama is a nationally revered calligrapher. What takes a little longer to be revealed is that tomoe refers to a spiral-like character in Japanese script. Otsuku finally understands his fascination with the curve of Tomoe’s armpits, with ‘Tomoe’s body floating silently on air’. She is a symbol of herself. ‘When Tomoe’s hair spreads across the water,’ says Koyama, ‘that is also a written character.’ If Murakami’s early work represents an effort to put writing at a distance from its object, Tomoe is precisely the opposite. In the figure of Tomoe, writing is reconciled with its object. She is a utopian situation, the final realisation of a dream centuries-held that humanity might one day rediscover a pre-Babelic language, a universal system of communication capable, in Umberto Eco’s terms, ‘of expressing the nature of things through a kind of homology between things and words’. Just be careful what you wish for. She eats the narrator’s head off.