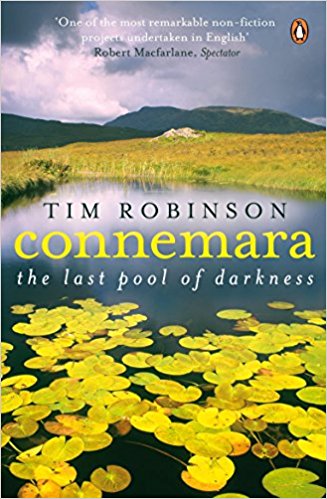 Connemara: The Last Pool of Darkness

The epigraph to Geography III¸ Elizabeth Bishop’s last collection of poetry, reads: ‘What is geography?/A description of the earth’s surface./What is the earth?/The planet or body on which we live./What is the shape of the earth?/Round, like a ball./Of what is the Earth’s surface composed?/Land and water.’ The world is everything that is the case, as another sometime Irish literary tourist, Ludwig Wittgenstein, put it in the first sentence of the Tractatus Logico-Philosophicus. Wittgenstein’s time in Ireland has long fascinated Irish writers, beginning with Richard Murphy, who stayed in the same cottage as the moody Austrian in Rosroe just two years after his departure, finding some of his correspondence stuffed under a rafter. For Wittgenstein, Connemara was ‘the last pool of darkness’ in Europe, the one place left in which he might think. ‘The world, though, is also so much more’, writes Derek Mahon in his riposte to Wittgenstein, ‘Tractatus’:

Tacitus believed mariners could hear
The sun sinking into the western sea;
And who would question that titanic roar,
The steam rising wherever the edge may be?

Tim Robinson is not the type to neglect an audible sunset, but nor is he about to relinquish his obligations to the ‘everything’ that is the case, according a scrupulous parity of esteem to the topographical and the fantastical. As he writes in ‘Refloating Inishbofin’: ‘The foundation myth of Inishbofin may seem ancient foolishness, unfounded in reality, but it is well and wisely founded in the unfoundedness of reality itself.’ Connemara’s is a boggy landscape, a quaking sod, and Robinson’s writing, while never less than pellucid, knows all about mapping the amorphous and the vanished.

The second volume of Robinson’s projected Connemara trilogy finds him principally in the Clifden/Cleggan corner of northwest Galway, and for much of the time either by the shore or at sea. He revisits the Cleggan disaster of 1927 and the subsequent depopulation of the fishing hamlet of Rossadillisk, visits High and Omey Islands (Richard Murphy connections all round), and remembers the piratical exploits, much barnacled with mythology, of Granuaile and Captain George O’Malley of  Ballynakill. As the book’s title suggests, the figure of Wittgenstein presides symbolically. The philosopher’s time in Rosroe was not entirely successful: he struggled with grief over the recent loss of his friend Francis Skinner and his neighbours considered him mad, forbidding him access to their land. He tamed the village birds to the point where they fed from his hand, only for the local cats to eat them all on his departure.

The land and its shifting history of ownership make for an ever-contentious backdrop. Gaelic chieftains come and go, shrewdly cultivating the English and put to the sword when their usefulness expires. The great estates of Kylemore and Renvyle are chronicled, with the usual supporting cast of landlords, from benevolent industrialists to rack-renting absentees. ‘I think, just for the principle of the thing, you should fuck off my land!’ a belligerent farmer informs Robinson at one point, though he then tells him he agreed with his stance against a proposed airport in Clifden (a saga described in the 2001 essay collection My Time in Space).

Robinson’s commitment to the ground beneath his feet is boundless. His search for an elusive lake, Loch na Niadh, leads him into the rough on a golf course in Aillebrack, where he thrashes about like a benighted titan doing battle with decadent modernity. Readers who remember his account of mapping the Burren and the frequency of his descents into overgrown passage tombs may see him as a kind of topographical Lazarus, resurrecting the land about him as he goes. As the reference to the Clifden airport suggests, however, Robinson is no museum curator or mere antiquarian. The changing fortunes of the land he surveys are the changing texture of Irish reality itself, something he sifts all the way down to the subatomic level explored in ‘Photons in the Bog’.

When I pore over antique maps, I always feel a slight disappointment on entering the modern era of mere accuracy, leaving behind those pustular approximations to the shape of Donegal and crocodile-teeth renderings of the Galway-Mayo coastline beloved of the Elizabethans. Dennis O’Driscoll has quipped that misprints should occur in poetry as rarely as misprints in legislation, though with maps things are slightly different: the Ordnance Survey deliberately incorporates mistakes as a deterrent to copyright violations. Even without such practical jokes, cartography knows how to play tricks on us: tramping around Wicklow recently, I noticed that Sally Gap, that belly-button of the Wicklow mountains, was no longer Bearnas na Diallaite (‘saddle gap’) on the road-signs, but Bearna Bhealach Sailearnáin (‘The gap of the way of the sally-trees’). Why the change? And why the error, for all those years, if indeed it was an error? I’m rambling here, not necessarily a bad thing in the circumstances, and only wish I’d had a volume by some Wicklow Tim Robinson to hand to settle the matter. Maps are designed to be taken back into the landscape they chart, and the same emphatically goes for The Last Pool of Darkness: the experience of travelling around northwest Galway as I read the book added a whole new dimension to my appreciation of its achievement. It was as though Robinson’s map of Connemara (first published in 1990) was folding itself back onto the earth before my eyes, in some fantastical realization of Jorge Luis Borges’s dream of a one-to-one map, the size of the landscape.

In the course of his memoir, The Philosopher and the Wolf, Mark Rowlands applies his theory of ‘externalism’ to a pet wolf he kept called Brenin. Rowlands believes that mental processes happen not just in the head, but are embedded in our surroundings. Thoughts are a vector, generated not just by the thinker but the object of contemplation too: ‘there are certain thoughts that can emerge only in the space between a wolf and a man.’ Robinson thinks in, with and through the landscapes he describes. Taking his maps, the two volumes of The Stones of Aran, his other essays and fiction, and now this trilogy as one unified whole (and they seem to me to benefit from being read as such), these separate units add up to perhaps the single most impressive writing project undertaken in Ireland in the last several decades. James Joyce liked to boast that if Dublin were destroyed it could be rebuilt brick by brick from his books, a peculiar boast for (in many ways) so unvisual a writer. It would be flippant and inaccurate to apply the same boast to Tim Robinson’s Connemara, given that so much of what he renders is already gone, but how peerlessly luminous do those shadows and absences become in his hands, and how mystically luminous too the pools of darkness that remain. I began with Elizabeth Bishop, and will end by circling back to where I began, this time to quote the last line of her poem ‘The Map’: ‘More delicate than the historians’ are the map-makers’ colors.’

David Wheatley is a poet and critic. His books include Thirst, Misery Hill and Mocker (The Gallery Press). He is a lecturer at the University of Hull, England.

The House of Love