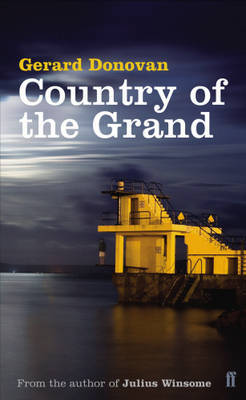 Country of the Grand

Abandoning Dublin as the too oft-chosen location of Irish city dramas, Gerard Donovan’s collection of short stories, Country of the Grand, instead focuses on Galway—a city which provides not only the bustle of office workers, new housing developments, and motorways, but the sea, country roads, and birds that land on window sills every morning. Here is Ireland post-Celtic Tiger; prosperity that does not make husbands stay or girlfriends willing to marry, but that does allow a man to buy a house for his mistress and illegitimate child without informing his wife.

Donovan, an Irish émigré living in America, was long-listed for the Booker in 2003 for his novel, Schopenhauer’s Telescope. His most recent novel, Julius Winsome, has been praised as a modern classic with ‘the clean punch of language, which he delivers with devastating force.’ It is a complex psychological novel in which Donovan deftly ‘pursues the nature of human cruelty’ (The New Yorker, Books Briefly Noted, 25 December 2006).

In this collection, however, the stories are mainly about men in the midst of the everyday. In the opening story, ‘Morning Swimmers,’ Jim overhears his two childhood friends discuss his wife’s infidelity as he hides in the concrete changing rooms by Galway Bay. And in the title story, Frank, a solicitor who has a few too many pints after hours with his co-workers, finds himself walking up the motorway to his first childhood home—the family farmhouse—only to return to his own home where his wife has hosted a dinner party. As he falls asleep he decides that ‘tomorrow he would also tell [his wife] how it was fine for them to buy the property in Westport—that he did not even need to see it first.’ There is no Rubicon here to cross, no sense that things are about to change. Unexpressed is the belief that change has already happened: Ireland has become a new place because of money, and money is not worth discussing any more. Donovan’s characters swim through the ordinary, never truly unhappy, but still lacking and searching for something they may have never realised was gone.

This is, of course, nothing new. Contemporary realism, where life decisions are decided while sitting in traffic or in bed or while working at a construction site, is not, by any means, lacking in modern Irish fiction. Nor is the idealisation of a simpler past—the remembrance of a family farmhouse or a flat-bottomed boat on an abandoned lake. And, like most reflections of that earlier time, it is a past that, more often than not, reveals itself to be less than what it seemed. But Donovan’s effort is more striking and genuine than faltering, and the subtle emotions that accompany mundane actions have kernels of poignancy and truth.

In one of the stronger stories, ‘How Long Until,’ Peter asks his wife, ‘If I died tomorrow, how long would you wait until you did it with someone else?’ The question is prompted by an insurance ad Peter sees on a congested highway as the couple drives to Peter’s in-laws’ house in Galway. It is a moment that Peter wants to take back because the discussion that follows only pushes him further into doubt as to why he and his wife are together. Peter tries to parse out what it is that keeps a relationship whole, ‘What preserved a marriage from the people in it?’ And it is here that Donovan’s skill as a writer shows: he is not a lyrical writer (and when he does fall into description, the writing often stumbles), it is his dialogue that is clearly strongest. The emotional strength of many of these stories comes from the moments when his characters speak to one another—when they say less than what they are meant to or when, in speaking, they find they cannot communicate at all. At the story’s climax, when the possibility to resolve the whole mess presents itself, all Peter can muster is that, ‘It was just a question.‘

‘Glass’ describes fourteen-year-old Paul who, after his father is killed at work while digging a trench, stops talking for a period of time, alienating his mother who in turn spends her nights with a signalman named John Higgins. John disrupts the silence Paul feels should dominate their lives, playing music, singing, and making his mother laugh. Their struggles to cope and move on are resonant with the intensity in many of the other stories, and the irony that it is John—even after he has left their lives—who brings some closeness to Paul and his mother is a beautiful and quiet moment, seamlessly achieved.

‘Archeologists,’ the longest story in the collection, seems to be the story that Donovan prizes—at least for its symbolic significance. The metaphorical ‘digging into the past’ appears in many of the stories, though nowhere else does it occur so deliberately. Unfortunately, most of the dialogue here is stilted and the characters feel less genuine. Two academics, Robert and Emma, are hired to excavate an area which is scheduled to be paved for a petrol station. Robert falls for Emma, and wants her to join him and his family for a holiday in Donegal. He pleads with her, she ignores him and focuses on her work, some notional higher calling, with the aid of a sole light bulb:

She needed to find something that was written in a previously undiscovered Neolithic script, a recording etched into stone instead of a round metal disc, something that said, This is what we did, this is where we were, and here are pictures, here are the sounds of our voices, this is who we fought, this is who we loved and who loved us. Now you know. And this was what drove her.

The redeeming character is Touhy, the construction foreman, who argues with what he deems to be two snotty academics digging where his petrol station should be getting built. As Emma continues digging, despite Touhy’s threat to ‘call Dublin,’ she discovers the remains of a Young Irelander. Their presence seems staged and convenient, the moment where Robert, Emma, and Touhy stand silently viewing the just uncovered ‘mute bones’ simply falls flat.

In a time where material wealth can potentially smooth over immediate concerns of personal stability, Donovan’s characters find themselves unstable and unhinged by everyone around them—their wives, neighbours, friends, and even their own children. Coupled with the fragility of the everyday, his characters seem to be coping with a constant sense of loss as well. This recurrent theme manifests itself in stories where parents abandon their children, rehashed as grown men who, at unexplained and inconsequential moments, recall their parents who have died. It is an emotionally dense book, and there are few flat notes when it comes to the authenticity of these moments. While at times the inwardness of the characters might sink into cumbersome descriptions, Country of the Grand is a collection that ultimately succeeds.

Emily Firetog is a former editor of The Stinging Fly. She has an M. Phil in Creative Writing from Trinity College Dublin and an MFA in Fiction from Columbia University. She lives in New York.