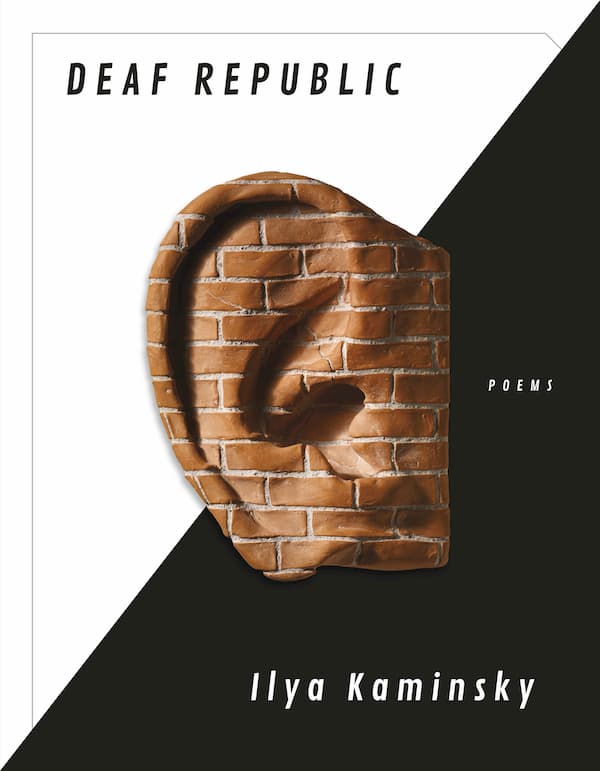 Somewhere close to the end (but not the end) of Deaf Republic, Ilya Kaminsky does the math for us:

There were too many bodies and
not enough people –
too many ears and no one attached to them.

In this time
each person does something for our country.
Some die.

Some sum. Confronted with these lines, I went back to the beginning and I counted them. Every clear death I could find, every dead body. Because to have done the math for us is to have told us some(sum)thing about it – it: the weight of a dead body; and it: poetry’s capacity (the capacity of language) to describe this weight, to carry it (in language, for a short distance) and then pass it on (through language, in words) to us, the readers.

Deaf Republic, Kaminsky’s second collection, describes an occupied country. It begins with a gunshot that “lifts the gulls off the water”. Even before I have started counting, I find myself wanting a reason for the foreign-ness (its implications) of the occupied country described in this collection. Some of us will see right through it, come so close to what is happening in the collection that we hear, and smell, everything (because for some of us, this is not foreign, or new, or not not-a-real country; for some sum of us, we will have lived through it, and/or are living through it still). On the other hand, for the majority sum, it is (perhaps) true that we will use this construction of foreign-ness to keep ourselves safe (meaning, we will keep ourselves at a distance). In this way we can convince ourselves of our innocence, of only being innocent onlookers; isn’t it enough that we read poetry? What more? (What more, from us, than this?) Here Kaminsky, for me, does some math too and it is perhaps because of and only for the sake of some readers’ comfort that we are offered these deaths, in this way – for our comfort, that they happen in a “foreign” country; for our comfort, that they are dead bodies with dead names that some of us may find difficult to pronounce; names, for our comfort, that are not familiar, so that, for our comfort, we can look on at this occupation from a distance (a distance that comforts us, because it exists, for our comfort); we can look on, from a distance, at this war as a thing that is not (for our comfort) happening to us, or (for our comfort) because of us. It is perhaps because we want to be comfortable, to believe (only) in poetry’s capacity to be a record that he, Kaminsky, does the math for us again, and sums it up, again, even before the first shot is fired: ‘we (forgive us) lived happily during the war’ (‘We Lived Happily during the War’).

Some sum. Yes, this is a foreign country, and yes, this is and can be (for those of us who are concerned about our comfort) just a book of poems, full of the twists and turns of language, but Kaminsky, for me, is being crystal clear about his poetic intent. Poetry is record (of course it is), and this collection is some/sum record, but do the math, and it adds up – every poem in Deaf Republic is also (forgive us) a mirror, reflecting us, ourselves, back to ourselves:

And so I counted them.

Some sum 1: the simple math of the body of the boy. A young boy, Petya is shot dead on page 11; this same death is recounted again on page 16, and then it, his body, lies there, in the square, for pages. Take a moment to imagine what that must smell like, across pages, in this collection of poems about a foreign country – the decomposition, the breakdown of skin and organ: “[o]bserve this moment / – how it convulses –” (‘The Map of Bone and Opened Valves’). No reader is an innocent onlooker in times like this; the poem is on record as mirror, and the poem as mirror is held up to us, asks us to consider how much weight we can afford, what we are willing to carry, faced with “the body of the dead boy that is like the body of a dead boy”. I read this to mean we are being asked to consider real deaths in real time, in real life. It’s an easy thing to do, in the real world we really live in. Let’s remember the body of a real boy, in real life, a body that really washed up on a real beach on a real day (September 2, 2015); none of this is foreign (especially not the boy, a human being, wherever he was from). It happened, and we (forgive us), we watched it. And what did we make of it? Not enough, and so Kaminsky tells us, in this order, something about the weight of this death: ‘the body of the boy lies on the asphalt like a paper clip’, and then ‘[t]he body of the boy lies on the asphalt like the body of a boy’. The math adds up. Here is a poem where the word ‘paper clip’ sits heavy, carries weight, makes the point: we are moved because it is an exaggeration; surely the body of the boy is exactly like the body of a boy (and this should mean something to us). But (really) it doesn’t; we have seen it all before. But, a paper clip – this moves us, because it is absurd; it reflects our absurdity back to us. It is absurd to think we can keep looking, at this life, at the poems in this book, and still believe we are innocent bystanders. We are responsible. And the power in this collection is not that it hits us over the head with this, again and again, as if it were hammering home a nail. No. Kaminsky’s skill is that he is able to do this to us with the lightest touch of language – at the risk of being cliché about it, he knocks us over with a feather (he knows it too: “Whoever listens: thank you for the feather on my tongue,” (‘Alfonso Stands Answerable’)). All of this is, of course, as it should be, as it should feel – totally uncomfortable.

Some sum 2: the simple math behind the named and the nameless. In the poem ‘Checkpoints’ three women are stopped, and, for not being able to hear the Sergeant, each one is, in turn, loaded on to a truck. There is nothing to say if they are ever seen again, so, I feel safe in counting them among the dead; I assume each one of them was killed, one after the other. This is not, unfortunately, what concerns me most. What concerns me most, about these women, is this: we are not told their names. This is not the only time women die without being named in the collection (and let us also remember: this happens in real life too). Later in the book, fifty (fifty!) nameless (nameless!) women are shot dead in ‘Firing Squad’. I stop counting (for a moment) because without names, what can we say about these deaths, their meaning, their weight? We are given the name of the street they are shot on. The street, because it has a name now, and we know it, holds some meaning. Meaning is afforded here, to this street. It is also afforded to three soldiers who die on page 56 (in fact, they die two deaths a piece: the little coming (forgive me) just before the big, each time), and are subsequently named on page 62. Perhaps this is, in an occupied country, an attempt to make them human, to give them some meaning beyond what is conveyed by their uniforms, their actions. But then, what of the women, those who go unnamed, the three and then the fifty (and all the women who die in real life too, without being named) – why can’t we do the same for them? Why aren’t we given their names? Forgive me, but I cannot bear this alone. So: I am taking a moment, and I am pointing it out because we must all carry this nameless (and as such unknown) weight together. Poem as record and mirror, and mirror and feather, all together. Here, Kaminsky shows us ourselves and we are knocked over by what we see: we are responsible for what we accept as acceptable; more than this, we are complicit.

Some sum 3: the simple math of being constant (and constantly complicit). And I keep counting. Having a name, of course, does not save you from dying or being killed in an occupied country. Sonya dies by firing squad on page 33. There is no mention of where the bullet hits her, only that the soldiers raise their rifles on her command; and there is no mention of when, only that Alfonso, her husband, is a widower on page 34. Alfonso, upon receiving a payment of a box of oranges (is this the equivalent weight of a dead body in an occupied country?) kills a soldier on page 39; by page 40, the body of the soldier is described as a corpse (and we are grateful (forgive us) for this word because it does not remind us of a paper clip which means then that we are at a distance, for our comfort, from the body of the boy). Alfonso dies somewhere in the infinite space between pages 43 and 44; the time of his death is not clear. What is, is this: he was hung, he had pissed himself, and while “[t]he puppet of his hand dances”, the simple math of being constantly complicit (forgive them, and us) rises in step with the body count. By my count, Momma Gayla is the last of the dead: “her coffin, it got chocked / in the stairwell and we had to carry it upside down” (page 70, Anonymous).

each of us
is a witness stand:

They take Alfonso
and no one stands up. Our silence stands up for us.”

— ‘The Townspeople Watch Them Take Alfonso’

Final body count: 59. There are more, of course, Deaf Republic is an occupied country after all. In an occupied country, Kaminsky reminds us (once again, even though there are some/sum of us that have, for our comfort, kept our distance) that we are, all of us, “sitting in the audience, still. Silence, like the bullet that missed us, spins – ” (page 72).

But the world in Deaf Republic is anything but silent: the gunshot makes a noise, and it lifts the birds (page 11); Alfonso runs etcetera with his legs (page 13) – etcetera (a word that makes a sound (like a name makes a sound) and therefore holds meaning in a world full of noises); “the squeaks of strings and the tap tap, against the buildings, of wooden fists and feet.” (page 14); “[h]e hears the cars stop, doors slam, dogs bark. When / he pulls his hand off the ground, he hears nothing (page 17); “dogs…/understand everything and bark and bark” (page 20); “As soldiers stomp” (page 24); “quiet hisses like a match dropped in water” (page 26).

In between some die. The rest surrender. As for deafness, Kaminsky offers it up, like a feather floating down from the sky (when it lands, it lands on the asphalt, like a paperclip): “deafness passes through us like a police whistle”.

Dimitra Xidous is the Featured Poet in our Spring 2014 issue. Her work has been shortlisted for the Bridport Prize (2013), Over The Edge New Writer of the Year (2013) and long-listed for the Montreal International Poetry Competition (2011). She is co-founder and co-editor of The Pickled Body, an online international poetry journal. Her debut collection, Keeping Bees, is published by Doire Press.

Maybe He Just Slipped In